What Really Killed I SHO PEPPER 27 Yrs Ago, His 3rd Wife, YETUNDE Opens Up 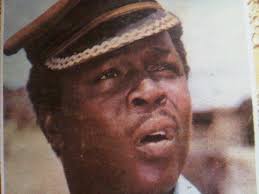 Evangelist Yetunde Ogunsola is one of the veteran actresses rocking the make believe world.  Not only that she is popular as one the wives of the late legend, Late Ishola Ogunshola, one of the pioneers of what is called Nollywood today and popularly known and called Dr. Isho Pepper who died 27 years ago, but she’s known and called Iyawo Alalubosa. She’s also known as Ayoni.

One good thing about this veteran actress is that she has never retired from acting. She still features in many movies till date. She’s one of the pillars that have kept and still keeping the legacy that Late Dr. Isho Pepper was known and recognized for.

Evangelist Yetunde Ogunsola is from Ilesha, though she had her childhood in Ibadan because that was where her parents resided at that time. She attended St. James primary school in Oke Ado, after then she proceeded to Army Children School that was in Ifaki back then. Her journey into theatre started when young Yetunde suddenly developed interest in acting. Her father was one of the strong musicians in Ibadan at that time and that made the Late Isho Pepper close to the family.

He always visited the family with his theatre group in their theatre lorry and that attracted the interest of young Yetunde and she decided to travel with them on one of those days, and the whole story changed, and that was how she became what she’s known for till date.

Evangelist Yetunde Ogunsola was at the 60th birthday celebration of Alhaji Yinka Quadri in Lagos and she was engaged in an exclusive interview with City People duo of  SUNDAY ADIGUN and BIODUN ALAO. She revealed a lot about her journey into acting over 40years ago and what really killed her late husband, Dr. Isho Pepper 27years ago.

How has it been since the death of your husband, Dr. Isho Pepper?

We give God all the glory for his mercy and goodness. Though there have been a lot of lapses ever since Ishola Ogunshola popularly called Isho Pepper left this sinful world but God has been taking control. You will recall that in this year we lost one of us, the wives, Ijewuru, in February to be précise.

God has been our sustainer; He has been taking care of us, taking care of the children. Our children are progressing. The beauty of it is to see ourselves moving forward and keeping the legacy he left behind.

How did acting start for you ma?

I started acting over 40 year ago; I joined Isho Pepper in 1972. That time we practiced core travelling theatre where we have to travel from one village to another, from one town to another. Once we finish in one town today we move to another tomorrow. We travelled to the North, East and South.

I joined the theatre group after the civil war and we were privileged to act for the Army in the East and we were able to tour every nook and cranny. Don’t let us deceive ourselves; stage play is very sweet and interesting. When you are on stage and you are looking at the people watching you, you will be happy. There is no doubt, it’s good to be an actor, and if you are a good actor you will always be happy within yourself.

There is this joy that comes within you when you know that you are a fantastic actor. Stage play is very interesting and we enjoyed ourselves to the fullest, but everything has changed now. There is civilization now, despite that I still thank God for relevance, for still counting us worthy up till date. I give God the glory, and everything is going on fine, we thank God.

Was acting for you an inbuilt talent or you learned it?

I would say it’s an inbuilt and we also learnt it. Though we were wives then, but we learnt it from our husband. And if what you have been doing for the past 40years is now not in your blood then you should go and look for another job, so I thank God.

Which of your jobs shot you into limelight?

Which of these two gave you the popular name “Ayoni”?

I was named Ayoni in Efunsetan Aniwura, named Adetutu in Iyawo Alalubosa, the slave girl that was impregnated and beheaded.

If you look at acting then and now, what are the differences you have noticed?

There are differences. The money we realized then suited that time. My husband was using a brand a new 504 SR then and we were living fine, but now things have changed.

How best can you describe your late husband, and what do you really miss about him?

Ishola Ogunshola in his lifetime was a writer, a drummer and a dancer. He was the one that composed the songs in many of the movies that came out that time except Ogunde’s movie. Even then he was the one Ogunde usually taught all the songs before he will now teach us. Isho Pepper was very good at every aspect. And as a husband and a father, he was a loving husband and a loving father before his death 27 years ago.

As one of his wives, what would you say really led to his sudden death?

It was hypertension. Hypertension is very common these days and its curable now, unlike then it was a big deal. If it were to be now he may not die because he was a hypertensive patient. At that time, moving from one town to another we didn’t know anything about test or medication that may cure hypertension.

The day he died, his blood pressure rose up to 280+/150+ and before we could rush him to the hospital the following day he gave up the ghost. What I’m trying to say is everybody needs to take care of themselves by going for regular checkups. Many diseases are curable now but early detection is the key factor.

We don’t really have much time for ourselves that time, travelling up and down. The location that we are spending 3days 4days these days, to shoot a complete movie, then we always spend close to 5weeks at a location and its one film every one of us will go for.

It is when we finish Ogunde’s movie we will all move to Ade Love, from Ade love to Baba Sala. It may not be more than 2 movies that we would release in that year, and once we return back we go for tour for another 2 to 3 months.

So we didn’t have the wisdom civilization has given us now. If you are hypertensive now even without any drug prescription you have the knowledge of what you can do to suppress it for a while.

How many wives did Dr. Isho Pepper have altogether?

You don’t count wives in Yoruba land (laughs)… but we were 5 in numbers in his house; IyaAlakara, Efunsetan, Ayoni, Ijewuru and AinaOrosun.

Do you have any regret so far?

I thank God, despite the fact that my parents were not in support of what I did, because I ran away from home for 2 years before they knew where I was.

You ran away with a man?

Yes, I ran away with Isho Pepper (laughs), they were just hearing about me. Some people told them that they saw Yetunde with Isho pepper. But so far so good, I don’t have any regrets. I gave birth to children. We have a house that we are living and we believe that God will perfect every other thing. My mother later started calling me Iya Ayoni and my entire family are very happy including my siblings abroad and that is the joy.

What Really Killed I SHO PEPPER 27 Yrs Ago, His 3rd Wife, YETUNDE Opens Up was last modified: September 22nd, 2019 by Reporter

What The Prophets Told My Mum Before I Was Born – LIBERATION City Pastor, CHRIS OKAFOR

The Day My Husband Tried To Set Me Ablaze, LAGOS Celebrity Lady Reveals How She Packed Out