WHO Team Arrives WUHAN, Begins Investigation Into Causes Of COVID-19 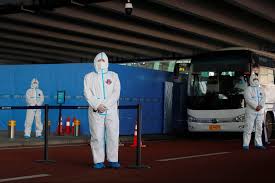 A delegation of World Health Organization experts has arrived in Wuhan to start a probe into the origins of the coronavirus which has put panic in the spine of countries across of the world.

The team of 10 scientists would be placed under two weeks quarantine in Wuhan before starting their mission.

State broadcaster CGTN showed the plane carrying the team arrives from Singapore. They were received by Chinese officials in full hazmat suits.

The virus which was first detected in the central Chinese city of Wuhan in late 2019 has claimed lives of nearly two million people so far, infecting tens of millions and wrecking the global economy.