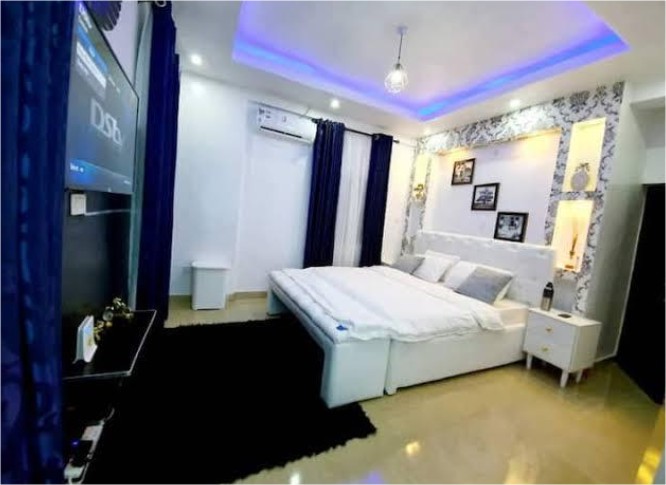 Short-letting house or apartment is gradually becoming more popular and acceptable in Lagos. Although it’s not new in Nigeria, but recently more investors are going into that sector and massively investing because it’s getting more patronage from travellers from other countries and states. People seem to prefer this short let to hotels and other regular offers. For those who really don’t know much about short term letting, let’s tell you more about it! Short-term rental describes furnished self-contained apartments that are rented for a short period, usually by the month as opposed to annual rentals in the unfurnished apartment rental market. They are seen as an alternative to hotels accommodation. “Short Stay” rentals are an offshoot of the corporate housing market. Popular uses include vacation rent and relocation.

This industry is seen as the most affordable option for a month-long stay and might be 25–50% cheaper than a hotel room. Some companies permit pets. Some booking procedures to be expected are credit checks, damage and holding deposits, and departure cleaning fees.

Some renters have found that online photographs and descriptions were misleading, contact with the company in question is recommended. The proliferation of short-term rentals can affect those in the area who are looking for long-term rentals. Through short-term rental, landlords can make upwards of 20% more than they would on a rent-controlled property.

Thus landlords convert their properties into short-term rental units, and there are fewer long-term housing options available to permanent residents. Landlords also sometimes pressure and coerce people out of their homes, particularly if residents are of low income. One of the effects of this is that diversity in the neighbourhood decreases as no one could move in anymore.

This short-let apartment is gradually gaining more ground in Lagos as more and more investors are now going into the sector. It is believed that short-letting is cheaper and it’s conducive to travellers’ comfort, who are coming from other states or countries. Privacy is also another significant factor in short-term letting.

One of the best in this business in Lagos is Tiara short apartment in Lekki, Lagos… They have been in the business for a while and are credible for the service they render. Tiara short-let apartment is perfectly built for travellers who need a luxury home away from home at a serviced apartment in Lekki Phase 1 with convenience and comfort in mind. The most sought after short-let apartment in Lekki Phase 1. 24-7 electricity & security, superfast wifi, 4 bedrooms en-suite complete with shower in each room, a 65 inch TV screen the living room with a pool table. An air hockey table in the Chillaxation room, a super base wifi speaker and a 43inch-55inch smart tv in all bedrooms depending on size.’

In a chat with Mr. Debo Adejana, Chairman REDAN, South-West chapter, said: Service apartment of short letting is not actually new. However, because of the application of new technology, it is gaining more ground; it’s spreading. Short-letting is the middle point between regular rental and hotels. Short-letting gives you a home environment and you can only do that for a short- period and a lot of what you need to live your normal life has been provided there already, all you just have to do is come there with your personal belongings. Yes, it’s gaining ground. And as people move from one place to another, and people coming from other countries to Nigeria, there would be a need for more and more people coming to demand short-letting the apartment as to the hotel probably it’s cheaper and affordable for them. Yes, it’s the way to go and it is more popular and lucrative in certain areas and not just every area. Short-letting is not something that has to be in every environment. Can short-letting work in this environment?

Of course, there are a number of areas that short letting is doing well in Lagos. The Lekki, Victoria Island, Ikoyi axis and some other areas where you have big industries, short letting would always be on-demand in those areas. Also, in an area like GRA Ikeja, short-letting is not doing badly there because people who come to Lagos many of them prefer to stay in Ikeja because of their trip to the airport and from there they can navigate to wherever they want to go, especially now that most government parastatals are on the mainland. So Ikeja, Maryland, Magodo are not bad at all for short letting.

Short-let apartments is now a threat to many big hotels as the big-wigs in Nigeria’s hospitality industry are losing market share to the smaller short-stay apartments. Nigeria ranks very high on the bucket list of countries tourists want to visit in Africa, short-let apartments, which is mostly driven by tourists in countries like South Africa, Mauritius and Morocco, is defying odds in Nigeria, thanks to large, local patronage.

Though it has been in existence in Nigeria since 2011, the not so popular short-let apartment leveraged on the COVID-19 lockdown, a period when most hotels were out of business and were forced to close their doors to occupants, to record breakthroughs.

According to Tunde Balogun, CEO of Rent Small-Small, the supply of short-let properties in Nigeria has grown to a stage that has surpassed demand. The many offerings in the short-let business must have stirred up competition and resultantly influenced the relatively lower price charged by the operators as against the conventional hotel price.

While Balogun described the current short-let market performance as a bubble expected to burst in the nearest future, he said there would still be winners in the business.

“According to data from Nigeria Property Centre, the average price of flats short-let in Lagos is N65,000 per day. This is compared to the average of N100,000 or more charged per day by hotels for a similar apartment that falls within the three or four-star ratings.

“Paying far less than to a hotel with the comfort of home added to its defiantly deal-breaker,” one of the patrons of the short-let apartments in Lagos who pleaded anonymity said that tenants would rather rent a house for a week or two with all the comfort facilities of a home than spending money on a hotel room, where they are left with just a fridge and a kettle. A win-win for tenants and landlords

While some landlords are directly reaping from the short-let industry, others are enjoying early rent payment from their tenants who put out their spare rooms up for shot let. People go on vacations for an extended period, leaving their properties vacant. These empty flats stay unused and bring them no added benefits. Renting out the building for a few months would make an extra source of income, at no extra cost.

According to industry analysts, more Nigerians are expected to join their peers and list properties for short-let and it would consequently lead to lower prices that will be enjoyed by occupants.

READ ALSO: 5 TYPES OF WOMEN YOU MUST NOT MARRY

Things You Can Do To Make Millions...