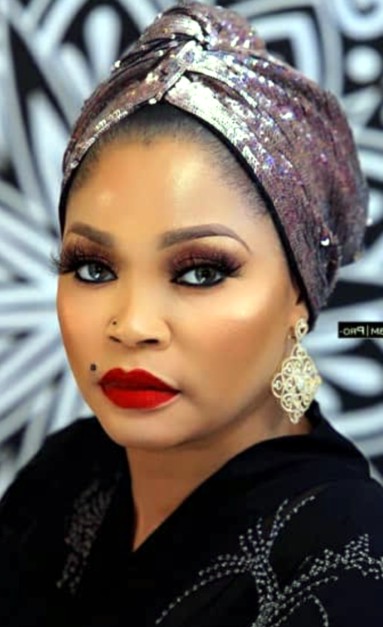 Olori Sekinat Elegushi, Queen of Ikate Land is one face many love to see at any ‘A’.list event. She is well-loved and always well celebrated on social media at the expense of any occasion she does. She is the dutiful wife of Oba of Ikate Land, Oba Saheed Elegushi.

As much as she loves to look good and mostly attends events with her husband, not many know she is a quiet person. She is someone who always loves to be on her own. No wonder, asides from friends whom she rocks with at parties, she is not known to have many friends. But she has a close-knit circle of friends who are members of her caucus. Recently, she spoke to City People on why she decided not to have a legion of friends despite being an Olori, “I have a caucus, just a few of them. I am not a friend-friend person. So, I know my circle. I don’t have plenty of them, but I cherish the few ones I have and I am okay with them. She also revealed why she is not on social media buff as expected of an important personality and also someone who is very stylish. “I am a shy person. I don’t like publicity. I am on the quiet side. I always love to be alone.so because of that, I am not on social media. Social media gives you pressure, you have to post, you have to dress up every time, I don’t have that time, because I don’t always want to makeup, the one I do is just because I want to go party. If I have my way, trust me, I will not be out. Few of my friends know. I might be home for months without stepping out, it is that bad. And you know, if you are on social media, they need something to interest them, so I don’t know what to post, when I don’t even love to go out, I am not a selfie type, I don’t have personal pictures I take every time, except my pictures with Banke, the one photographers take at parties, or the ones my siblings or children take of me, but doing it personally and be posting, I am not up to it. All my posting, Banke is already doing it for me, so I can’t be reposting on my page. I like my life like this and I don’t want to be on social media”. She is someone who has a very lovely skin, a good stature and she has maintained it so well. How has she been able to keep her lovely stature? She said,

“I am not really a food person. I think I eat once in a day and it will be later.Health wise though I know it is not good enough, but I thank God I don’t have ulcer. I am just blessed with a good stature and good health. I rest well a lot” in the day.

She also loves to keep a low profile despite being an Olori. She is one whose love for her husband is immeasurable, and so she has no choice than to always step out at events with her husband. That is about the time she is seen outside and at event which is so important that she has to attend. As she has made a success of her personal business so also she has made a success of her marriage to Oba Elegushi for over 10 years with beautiful children to show for it.

She once revealed in an interview, how she met her husband, how she has been living life as an Olori. When asked what were the attractions to Kabiyesi that made her decide to marry him? She says, “He was always all over me and there was no breathing space for me and there was no way I could have let him go. The bedrock started as friends. We all call ourselves SA cause it’s our initials – Sekinat Aramide and Saheed Ademola. All our children bear the same SA initials – Sofiat Adeteniola, Soliat Ademide and Sarina Abisade. so we all have the same initials.

Being a queen for over 10 years now was a bit difficult at the beginning. I remember when he told me he was to be made king, I was begging him not to take it; that I don’t want and he told me I would be fine and part of my fears was him taking another wife, but which finally happened. I was even pregnant with my third child at the time he was crowned and I had to come back early after birth to be with him. It was a bit challenging from the beginning, as there were many demands, which I wasn’t used to, but since I was familiar with some of the palace processes and the people there, we were able to settle down and 10 years after, we thank God for how well we have come. And at what point did they know you would get married? “I just knew because I had to take him to my dad to introduce him as my boyfriend and he was stunned, asking me all those questions a parent would ask. I reminded him I was in my final year at the university. So, I should have a boyfriend. At that time, he was already on NYSC, outside Lagos. When he came back after three months, we knew what we wanted and we were ready to get married. My dad was not in a rush, so he gave me another month to think through it. After a month, I went back to him that we were ready to get married and the marriage plans started. My father was even particular about where we will be living because we were still young. We had a big wedding; you know what you people call society wedding. We started from there and today, we thank God for how far we have come.

The queen whose philanthropic nature is unquantifiable is the founder of Queen Sekinat Elegushi Foundation, QSE Foundation. She has been involved with different charities for over 5 years, supporting their activities and giving back to the society, but about two years ago, the need to have her own platform became more important and that was how QSE Foundation came to life. Its desire is to give Quality and Selfless Empowerment (QSE) to women and also support their children. She recently just opened a multi-million naira event venue in Lekki called The Monarch Event Centre.

READ ALSO: …AND I PAID MY RESPECT TO JERRY RAWLINGS – DELE MOMODU