Why I Decided To Join OYO Governorship Race 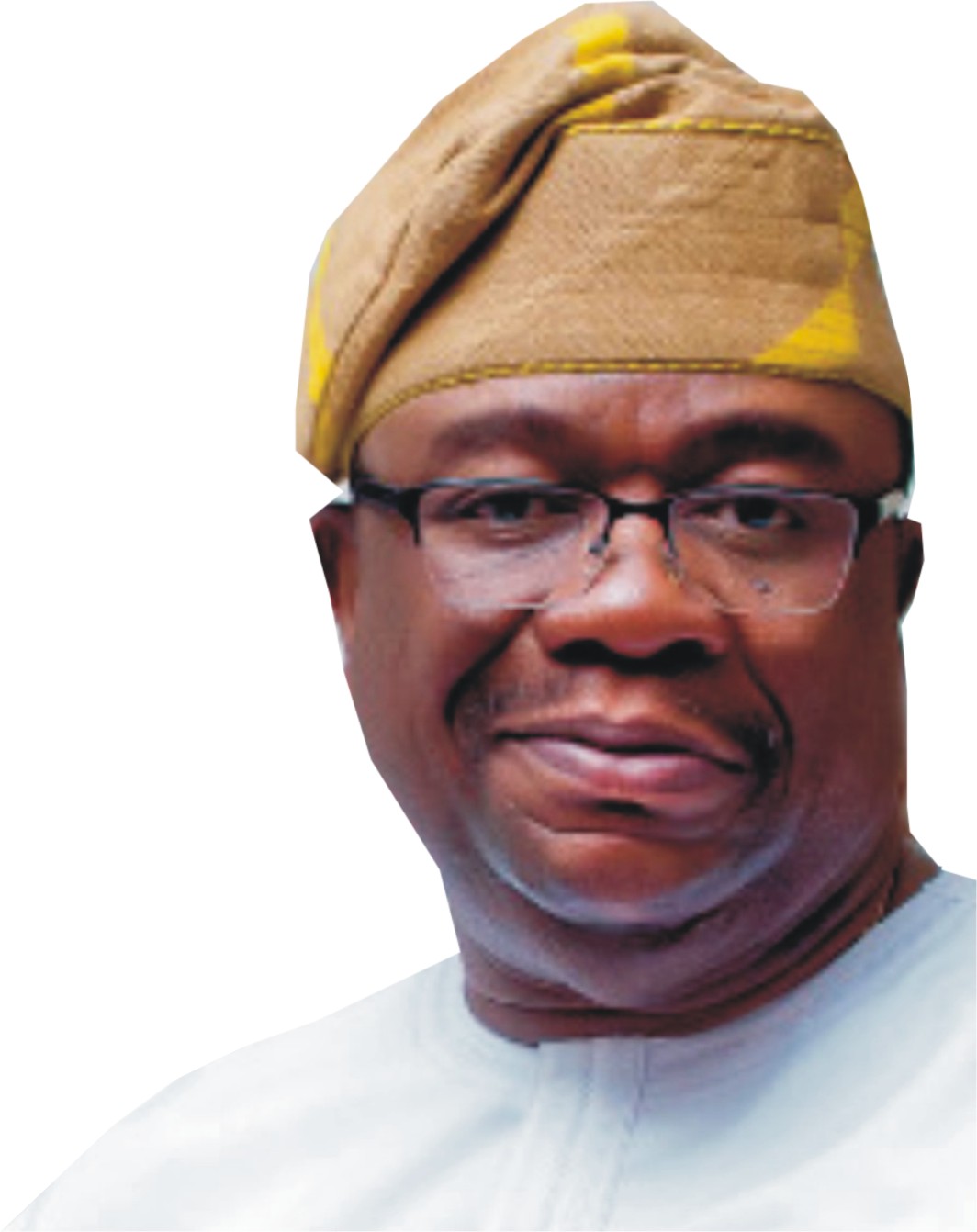 Popular lawyer, Chief Bolaji Ayorinde (SAN) hardly grants interviews, unless its necessary. He feels his work should speak for him. It has, because he is a damn good senior advocate whose services are in high demand.

A few days back, City People Publisher, SEYE KEHINDE got him to talk about his new political movement. He is running for the governorship in Oyo state on the platform of SDP. He has been actively involved in politics for a few years now. He is part of the political group called Nigeria Intervention Movement (NIM). Below are excerpts from the interview.

How easy was it deciding to run for OYO governorship?

The decision to offer ourselves for the position of Governor was not an easy one but like every major step in life it was one that was well thought out. Firstly, we asked God to guide us, secondly, the decision was a joint one. First of all as a husband and father, you discuss with your immediate family then members of your extended family and thereafter your friends, your political associate and in general, people who have invested in your life. You aggregate all these opinions and you form a position; this position propels you to a decision. So I will say it was not easy but it has been a well thought out process.

How and when did the idea come to you?

I have always been interested in politics even though before now I was not directly involved but I had been a professional in politics and not a professional politician. Having said that, the idea of running for an elective position was not something that came out of the blues but an idea that has taken several years to mature.

Why run on the platform of SDP and not APC or PDP?

Our Constitution and electoral laws do not allow independent candidacy and I hope this will change in the nearest future so as to open the political space and give us more choices. Every politics is local and in Oyo State specifically, the SDP offers the fresh platform for us to propagate our deep rooted ideas for responsible and good governance. Whether you like it or not, the PDP and APC have a set mind as to what governance is all about. My point is that we need a reset with regards to our approach to governance particularly at state and local levels. My hope is that by taking this initiative to run on a platform that is undiluted, we will be able to convince other stake holders and political activists that we can have a new direction to governance. SDP provides this fresh and exciting platform.

How easy was it to go into active politics when you did? When did you join politics?

I have given you a background to this and I will tell you why. I have had the good fortune of very good education and parental upbringing and support. There is therefore a burning desire for me to see that people do well in life. So, when I say do well in life, I mean access to descent health facilities, access to qualitative education and a satisfying and fulfilled environment for employment and development. So I have always advocated for a reset in our approach to government and governance. Now in my interaction with political actors since the commencement of this Republic, my take has always been advocacy for how government can impact lives directly. So that has always been my political ideology. The fact that I have not run for a political office does not mean that I have not been politically active in the past. In fact I am known for my welfarist principles. “the haves” must support “the have not”. This is what has always propelled me to participate in politics.

You have been part of NIM, what was the experience like?

The NIM experience has been awesome. NIM (The Nigeria Intervention Movement) took the socio-political space by storm. It’s a movement that woke up the conscience of many Nigerians who hitherto had been arm chair critics. The founders of the Movement saw the need of the political activists to be translated to political actors. Therefore people who had watched the political space and criticized decided it was time to get involved. Not for any selfish reason but to save the country from irresponsible governance. Nigeria will be forever grateful to the people behind NIM, from the co-conveyers. Dr. Balewa and Olisa Agbakoba SAN, to the people in the secretariat, what I call the engine room. People like VeteranWole Oguniyi, Kairat Animasahun&Naseer Kura and so many others. These people are working tirelessly to evolve a new political thinking in the country. I am privileged to have coordinated NIM in Oyo State. We began with town hall meetings and that led to youth meetings, women groups & associations meetings & special needs people’s meetings. Initially I was shocked at the response of people but later it dawned on me that people were eager for a new direction with regards to governance. This is very reassuring.

This is your first attempt at running for public office don’t you stand the risk of being accused of not having a previous experience in public office?

I have been extremely blessed to have been in positions of responsibilities right from my school days. Over the years I have held one leadership position or the other and I have been able to develop a leadership template that will always succeed. So whether as a young school boy who was made senior prefect or later in life being appointed Pro-Chancellor and Chairman of Council of a State University, being Chairman of the Legal Aid Council of Nigeria, the template is the same. The experience I am bringing on board is that of doing everything with integrity. Governing a state is not rocket science, a Governor is not an emperor or a monarch with absolute authority to be feared. A Governor is simply an administrator and the manager of resources in conjunction with others. Being Governor is a job and you work with a team to achieve your objectives. I have held public offices without blemish and I have run a very successful legal practice for over 30 years but more importantly is that I offer to serve with integrity and sincerity of purpose.

Because I am an aspirant and I tend to be the candidate and eventually win the election next year my focus for now is on how to engineer a reset in governance. I cannot therefore begin an assessment of the current governor of my state. The successes he has achieved and the challenges he has faced must all be properly analysed before a proper assessment can be made. You can say that he has done what he could within his capacity.

What are your own plans for Oyo state?

First of all we must play down politics in governance. We will try to immediately put together a very professional team to run the affairs of the state. Such a team will be all inclusive and by this I mean after a very intense and detailed consultation with all the stakeholders.Nobody should be left out in government irrespective of any political leaning or party affiliation if such person will be of benefit so the first step is to form a broad based unity government. The best hands must be on deck whether you have sympathy for SDP, PDP, APC, LABOUR PARTY or Other Parties. This can be achieved within a very short time between the conclusion of the election and the swearing in of a new government so you have a government that is already in place from day one.

Secondly, we must prioritise development projects. Take infrastructure for example, do we want to spend billions on ten lane road projects and bridges to nowhere or we want to improve on existing infrastructure, clean up existing roads, build up new inner city and rural road networks which will be easier to maintain than to maintain grandiose projects? Again do we want to apply our scarce resources to enhance the health delivery capacity of the state? A fantastic template for health delivery will be the combination of primary health care programme as put together by late Prof. Olikoye Ransom Kuti when he was, Health Minister and the Abiye concept which was introduced by Dr. Mimiko in Ondo State. The programmes have been certified by the World Bank. Both programmes allow access to every nook and cranny of the state. We can get this running properly within 90days.

In Oyo State, all the major book publishers in Nigeria are located on just one street in Ibadan. We need to create an environment whereby education becomes an industry. I have in the last one year put together a team of consultants who have come up with a fantastic template for tourism and creating an alternative environment for residential living outside the industrial pollution in some other states around us.

Therefore while we encourage establishment of industries we must take cognizance of peculiar of Oyo State for good residential living. Our industries must be friendly to our environment. We must direct substantial resources to agriculture to feed not only the residents but be the beginning of the food chain for the whole country and for export. We already have plans of recycling industrial, environment and agriculture waste for re-usage. We already have detailed plans with regards to the rule of law and security of life in the state. We are going to encourage a completely independent state judiciary devoted of any form of interference.

What new ideas are you bringing to the table?

I have given you just a bit of my views and of my plans and ideas, let me also add that myself and my team will be determined to encourage a reset of the mind of our people. We want the people to own the resources. We are only tenured managers. We are not going to be emperors but will be good administrators. Our ideas will be combined with the ideas of all stakeholders in repositioning the state that is why my aim remains to lead a unity government in the state.

How do you see the chances of SDP in Oyo state?

The Platform of SDP is fresh and exciting and the chances are very bright. Mind you, this venture is not a do or die affair, this a venture to serve. The aspirations and the hopes that I have is to be part of a resurgent and an emergence of good governance and responsible government for the emancipation of our people. We hope elections will be about capacity to govern and not about buying votes as it was in the last election in Ekiti State. We must address this very dangerous trend as it can lead to the death of democracy. If it’s a free and fair election, we shall surely do very well.

Why I Decided To Join OYO Governorship Race was last modified: July 30th, 2018 by Seye Kehinde