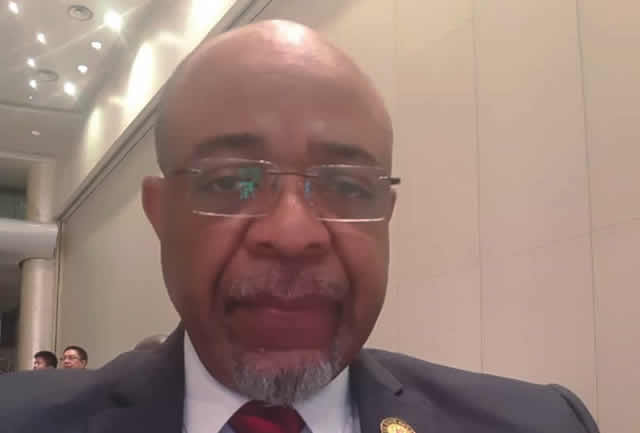 Prof Adetokunbo Fabamwois a Professor of Obsterics and Gynaecology at the Lagos State UniveristyCollege of Medicine (LASUCOM). He has just been appointed the new Chief MedicalDirector of Lagos State University Teaching Hospital  (LASUTH) by Gov. Akinwunmi Ambode.

This handsome surgeon is the current President of the Yoruba Tennis Club which is one of the oldest social clubs in Lagos and a prestigious one for that matter.

A few weeks back hespoke to City People Publisher, Seye Kehinde about his decision to go studyMedicine when he did decades ago. Below are excerpts of the interview.

Why did you choose to study Medicine at the time you did decades ago why not another course like Engineering?

It’s a very funny story. I attended Government College, Ibadan and we use to have a very pretty French teacher and as young boys we all had our fantasies, we all wished we could get closer to her, we all wish we could be her friend. We now discovered that a young man who was said to be a doctor at the University College Hospital, Ibadan used to come with his sports car to take her out regularly, and that was presumed to be her boyfriend. And it was at that time that I said to myself that if what it would take to be able to take a pretty girl out is to be a medical doctor I was going to be a medical doctor. That was on lighter note. The school I attended, Government College, Ibadan was a school that the colonial masters patterned in such a way that you either became an Engineer or a doctor. That was the way it was in those days.

We didn’t have A Levels in the Art Classes. So people who studied Arts subjects, really were on their own. Only science students did A Levels.

Also my mother really wanted one of her children to be a doctor. She had been hoping that my older sister will be. But she chose to become a Pharmacist instead. I think I just toed the line.

Just about 2 weeks ago, we had our 40years of leaving Medical school reunion at the University of Ife. About 20 of us, out of the 35 students that graduated were all in Ife. That’s how it was in Medicine.

Why did you choose the academic line? Why not just run your own hospital?

That is another long story. But lets start with why did I choose to become and obstetrician and a Gynaecologist. I chose to be one by exclusion I didn’t want to be an internist or a Physician.

I didn’t want to do Internal Medicine because I consider to be a bit boring. There was a lot of talk but there was very little to be done.

I didn’t want to be a General  Surgeon because I saw General Surgeons as people who will just cut. Again, little thinking to be done. I did not want to be a pediatricians because I do not want to have patients that could not talk to me. I couldn’t handle that. But I saw in Obstetrics and Gynaecologist a specialty which involves a lot of thinking and which also involves Surgery, which I had a flair for.

I have a flair for operating on people. So I chose that.

When I finished training as an obstetrician and Gynaecologist I really wanted to go into academics at the University of Ibadan but there was no vacancy in the department at that time. My wife was also having difficulties even as an MBA holder finding a decent job in Ibadan. All she could do was to teach and we didn’t like that. So, we moved to Lagos for better opportunities. She got a job in Lagos and I also started work at the hospital management board as a Consultant in the General Hospital in Ikeja. I did that for many years. As a matter of fact, I was one of the first consultant to start Ayinke House. Eventually, I became the Medical Director of Ayinke House for about 10years and then the Medical School started.

Remember, I told you I had always wanted an academic career. As at that time, I had put in 19years into Public Service, but I was still interested in the academic line. So, I chase to join the Medical School at that time, even though 19years had gone. I started at the Medical school, and I started all over again, progressing along the academic ladder and to the glory of God, I made Professorship in 2013. Really, for me, I didn’t think of the 19years. I just thought about what I wanted to be. And I thank God for that. So, I got to the top of public service, as Director of Clinical Services & Training of LASUTH and I also got to the top of my academic career as a Professor.

Why I Decided To Study MEDICINE Many Years Ago was last modified: January 6th, 2019 by Seye Kehinde