Why I Have Remained Single @ 52 – Gospel Songstress, KENNY ST. BROWN 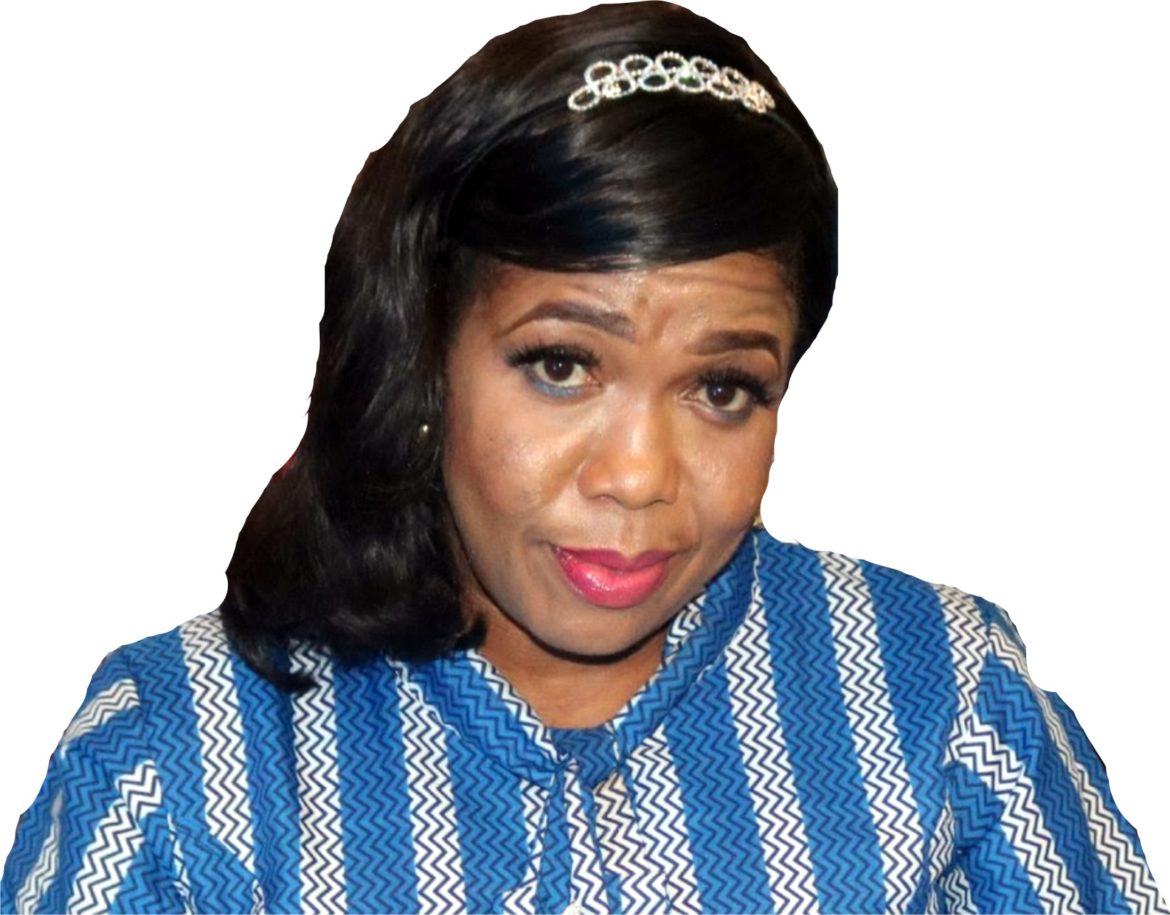 Kenny St. Brown a.k.a Kenny St. Best represents different things to different people. To many, she is that incredible gospel songstress whose array of different hit songs have continued to touch them and inspire them in many ways. To others, she’s an eloquent and inspiring motivational speaker and Life coach who has been able to put all of her life experiences into good use and bring hope and strength to people via her motivational speeches.

KSB is an author and a prolific one at that. One of the books she authored titled “Stop!  Turn It Around” has been described by many as an amazing work and a must-have publication for everyone desiring of a change and turn around in their present situation. This talented songwriter and A&R Consultant is also a minister of God. She currently serves at the New Minister in charge of the Youth Church. And wait for this, she is also a politician, and she’s not just playing kindergarten politics, she’s playing big-time politics, hobnobbing with the big boys, winning and dinning with the biggest political juggernauts in the land. A couple of years ago, she contested for a seat at the Lagos State House of Assembly. Although she lost, she didn’t let her defeat dampen her aspirations. She warmed her way into the hearts of top APC Chieftains who were impressed by her tenacity, hard work and commitment to the party and was soon announced as the Deputy Director of the Sanwo-Olu Campaign Organization. She was also a part of the former governor, Ambode’s Campaign team.

This delectable mother of two turned 52 last December. It must be said that she doesn’t look anything near 52. KSB still has her charming look, pretty eyes and a girlish smile that have endeared her to many over the years. City People’s Senior Editor, WALE LAWAL engaged the gorgeous looking KSB two weeks ago and she opened up about her life, her music, career and triumphs as a single parent.

You celebrated your 52nd birthday a few weeks ago, tell us, how do you feel clocking 52 years of age?

Really, you can only thank God for the celebration of your birthdays. And you celebrate it, even more, when you know you have a second birth. You know you have a first birth, which is when you’re born and you have a second birth which is when you’re born again. You have cause to celebrate because it’s your birthday and then knowing that the second birth that has introduced the grace to live on, to continue to grow, to develop, to know the will of God and be in the will of God and then you look back at the challenges that you have overcome, of course, you will want to thank God and celebrate. For me, it wasn’t about the age, it’s about the grace that came with the age. And then you celebrate the God of grace. I had a praise and worship event called KSB Live in Worship which I actually started from my 49th birthday to celebrate the God that gave me the life, the God that authored my life, wrote the script, ended the script, I am just living it out, ensuring that I’m just aligning myself with His will for my life, so it calls for celebration. This year’s edition was headlined by Mike Aremu and Mike Abdul.

So, what lessons would you say you have you learnt at 52?

Lessons about life? Maybe I’m probably too young to talk about lessons I’ve learnt about life. Maybe one thing I’ve learnt is the lesson of human beings chasing the shadows. Human beings are always too preoccupied with chasing the shadow while we leave the real thing. And we don’t even know we’re chasing the shadow. We’re ignorant of that fact. It’s a blessing I have treasured and it’s a lesson that pushes me to tell whoever comes in my path, whoever I get an opportunity to talk to and share moments like this with, to let them know about Christ. It’s the ultimate knowledge. It’s a spiritual location where you can’t fail and where the will of God works things out for you. So, I’ve learnt the lesson of the power of love. Even when you show love to someone, it’s the God in you. It’s not natural for man to just show love. Because of a lot of different kinds of experiences where people have hurt us, shown us so much wickedness and taken us for granted when love now comes you just don’t know how to open up to it and accept it. It’s a journey to even know how to receive love again, but if you can go on that journey, you’ll find that it’s beautiful. Love is what I’ve learnt to take in, absorb it and allow it to nurture me and allow me start on a new journey.

I know you’ve probably been born again long before we saw your first video, share with us your biggest encounter with God.

I don’t know my biggest encounter but I think the love encounter is the biggest encounter. You know, being born again, that’s just the beginning of it, beginning of the new personality. This personality now has to go through a lot of challenges and I’ve found out that whatever that challenge is, it’s just testing on your love gauge. How much love can you give? How much love are you willing to get? I always reach out for love. For me, even when someone is mean, you just know that the person is low on love. Because what you don’t have you can’t give. And so, for me, an encounter is the love of God encounter, and so I can’t put an event to it. It goes beyond someone buying you a new phone or a new car and then you say, oh, I feel loved. So, the greatest encounter for me is when I have had a busy day, I’ve gone round everywhere and I open the door of my bedroom, and I live alone, I’ve been single for like 13 years, and I open the door of my room and I feel an embrace waiting for me. It just overwhelms me. It’s like I pour cold water on my body, from my head to my toe and I lay on my bed. It’s overwhelming, it’s beyond words. That’s the love encounter I enjoy every day and I give God the glory. Beyond this, my greatest encounter is during worship when I get into orgasm, you know, it’s like a sexual relationship, and then in the presence of God, you vibrate. A lot of times when my worship is intense, not necessarily me singing but somebody is worshipping, and I feel this rush inside me. It’s sweeter than sex. That, for me, is the ultimate encounter.

A lot of people expected that after your marriage ended the way it did, being a celebrity, a glamorous and likable person, it won’t be long before you get involved with another man, but that didn’t happen. Is this deliberate on your part? Or is it the fear of the unknown?

Fear ke? My brother, the first thing I realized is that if anybody must go into marriage, cultivate friendship because the love would end and it’s the friendship that you guys share that will sustain you when challenges come. You hear couples say he’s got my back, I’ve got her back, oftentimes you realize they don’t have each other’s back, they are always suspecting each other. So, when I’m ready to go into a relationship, because I will go into one someday, hopefully, the next one that would lead to, shey you get, it has to be with someone with whom I’ve developed a strong friendship. It’s the kind of relationship that transcends. It’s deep, it’s strong. For instance, I have a twin brother and we’re friends. We share a special kind of friendship. I want that kind of..i don’t want to call it a relationship, I will call it fellowship.

No, I’m not. Again, I also needed to build my career because the thing affected my career, which I did. Then, I needed to nurture the children. Now, my daughter is in university and my son is almost going into university too. And in addition, I wanted God. I thought I missed out on God. So, I’ve been the God chaser and I found Him. Not that I didn’t have God, but there is a substance for every person that makes the man. Trust me, the best thing I’ve had in the last thirteen years is my single life, trying to find and get the essence of my life. Jesus knew what was written about Him. The day he saw it, he was reading, and he had people with him, he said, this day, you’re my witness to this thing that I’ve found, I have read it to you o. And that’s what I’ve been pursuing. I’ve been in pursuit of my assignment. It was beyond being a gospel artist. So, this is why marriage was not my priority. And while my children were my priority, finding me was my priority. And when you can find you, then you can give yourself away. When you haven’t found you, you’re greedy, you’re suspicious of people, you can’t give yourself away, and you’re not complete yet. But when you find that essence, then that’s the wholeness. Look at the woman with the issue of blood, what she was looking for was healing, but what she got was wholeness. She said if I can just touch the helm of his garment, I’ll be made whole. And Jesus knew that somebody took something from him. He said virtue left me. And he said, woman, your faith has made you whole, not your faith has healed you.

(Cuts in) You know, I can’t totally say I have not given one or two people a chance. But I just knew that I wasn’t too consistent in that area. Even my friends know that I am not ready for a commitment right now. My mother passed on 6 years ago before she passed on she said, come, is it your pastor who said you shouldn’t remarry or are you in a church where you cannot remarry because your husband is still alive or something and I laughed. I didn’t say yes, I didn’t say no, I just laughed. That same pastor she was talking about was also saying, KSB, I’m tired of seeing you alone, when are you going to bring somebody, before they start saying it’s your pastor o. He said, we know you, bring somebody, and he was saying it in the presence of the whole church and I was laughing seriously. June this year, a friend of mine got married, it was her second marriage, and I was like you, you don leave me now go and she was like you, do you want, you don’t want now. So, it’s a case of me knowing I’m not ready yet and I don’t want to waste anybody’s time. Even when I am desiring it, I ask myself, can you do it? Even when I say let me start, I know that as I’m starting it’s ending because my heart is somewhere else. But hopefully, next year, I’ll be ready. So, really, it’s been me, I’ve not been as committed as I should.

10 Things You Must Do Before Buying...