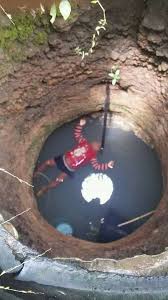 The Niger State Police Command has arrested a 55-year-old woman, Aisha Ibrahim, for allegedly killing her two-year-old grandchild at Karaya Fulani Camp in Rafi Local Government Area of the state.

Aisha reportedly tied the girl with a rope and threw her inside the well in their compound.

According to Punch, the suspect who was at loggerheads with her daughter-in-law, committed the crime when her son, Bello Ibrahim, and his wife left the child in her custody.

Confessing to the crime, the suspect said, “I told my husband to tell his son to divorce his wife but he did not listen to me. My daughter-in-law is fond of insulting and assaulting me all the time and the only way I could pay her back was to tie her daughter with the rope and throw her inside a well to die so that she will equally feel the pains and agony I have been going through.

“We have been living in peace as one big family before my son married her; I have 12 children and all of us are living in one compound; she cannot come from somewhere to destroy the family I have suffered for years to keep, it is unacceptable,” she explained.

Asked if she felt any remorse for allegedly killing her grandchild, Aisha said, “It was temptation, I didn’t know when I did it, I can’t just tell but may Allah forgive me. Honestly, it was a wicked act that can never be accepted anywhere in the world.”

Confirming the incident,the Police Public Relations Officer, Muhammad Abubakar, told Punch that the suspect had confessed to the crime and regretted her action.

Abubakar said she would be arraigned in court after investigation.

‘Why I Murdered My Grandchild’- Heartless Grandmother Finally Tells Everyone was last modified: July 27th, 2018 by Igbokwe John