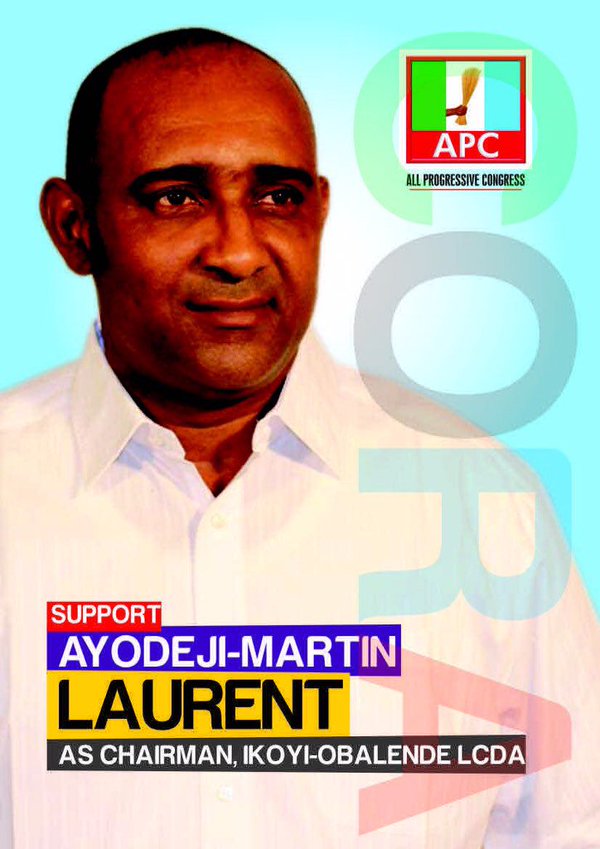 Charismatic, Agile and Visioner Ayodeji Laurent is a big force in Ikoyi/Obalende politics. He has contested for a seat at the Lagos State House of Assembly under the ACN and PDP platforms, but now his interest is to deal directly with the people of Ikoyi Obalende and that explains why he decides to contest the chairmanship of Ikoyi/Obalende Local Council Development Area (LCDA).

Aside his active involvement in politics he also runs an NGO known as Eti-Osa Youth Development Initiative, a body known for its philantropic gestures.

Since 2012, Eti-Osa Youth Development Initiative has been organising a Walk and Charity Concert for the people of Ikoyi/Obalende. 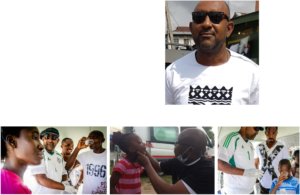 The Walk and Charity Concert has been used as a tool to unite and promote cordial relationship among the people of the community. In this exclusive interview with City People’s Reporter, FEMI FABUNMI, he speaks on his political career and reasons he organises one of the biggest street concert on the Island.

I am Ayodeji Martin Laurent, I was born in January 1972 at the Lagos Island maternity hospital. I am a Christian, I had all my education here in Lagos, Primary/Secondary and even Tertiary Institutions etc.

I got married in Lagos precisely September 2001 to my beautiful wife from Jos, I am blessed with 4 children and all schooling here in Lagos too like me, their father. I am a Lagosian who hails originally from Okesuna Street Lafiaji, Lagos Island.

You organise a Walk and Charity Concert every year, what is the motive behind it?

Actually, I have been doing charity for 15 years unofficially, but now it is now registered. About 5 years ago, my friends and I talked about it, so after that discussion, I decided to register the NGO.

We decided to make it a two in one package, i.e. walk in the morning and concert at night. The concert showcases talent in the community.

How long do you intend doing it?

It is going to be on for as long as it is relevant.

This year’s work and concert is different from the previous ones, because we provided food for 1,000 people, over 400 children went home with gift items that will be useful for them at home and school.

We empowered women by giving them food items to add to their Christmas ingredients.

There are insinuations making the round that all these are done for political gains because you are contesting for the chairmanship of Ikoyi/Obalende LCDA?

People are free to say whatever they want to say. I have been in politic for over 25 years, there is no way someone can mix politics with this NGO of a thing.

If you take a critical look at the walk we just staged you would realise we had another chairmanship aspirants Dr. Arinola Oluwo, she partook in the walk too. So this can never be about politics, it is purely and strictly NGO based.

Do you have any plans to extend this gesture outside Ikoyi/Obalende?

The concert is even crowded, people come from every corner to grace it.

How has the sponsorship for this project been for you?

It has been self help I must confess. There was no sponsor in the first year, we entered into a partnership in the second year, while 3rd and 4th had no sponsors again.

Last year Tecno supported us, but in this 2016 edition there were no sponsors again, because we had limited time to prepare. However, we got support from individuals who are living in the community, and with their support we were able to do something tangible.

Tell us precisely the gift items you shared during the programme?

After the work, we fed over 1,000 people, primary school pupils were given academic materials and toys. We shared rice, vegetable oil tin-tomatoes, pack of maggi, blood tonic and paracetamol which was given to us by Arab Chem Ltd. 50 different families beneffited immensely from the gesture.

Fill us in into your political career?

I contested for councillorship in this same area in 2003, I contested for Lagos State House of Assembly representing Eti-Osa Constituency 2 and I belonged to the late Funsho Williams Group Network.

However, I joined ACN in 2011 where I contested for the seat of Lagos State House of Assembly, Eti-Osa Constituency 2. Presently, I am running for the office of the Executive Chairman Ikoyi, Obalende LCDA… in the upcoming 2017 Local Government elections in Lagos.

Tell us about life before entering politics?

I worked briefly in the Nigeria Immigration Service, Aliens Registration Department 1999 – 2003. I was transferred to Lagos in 2003, to work in the investigation department at Alagbon Close, Ikoyi.

In 2006, I worked with Speakeezee Cellular and Paging Systems as dealers manager till 2007 elections. I also delved into photography and modelling till 2007.

Tell us about your NGO?

It is Eti-Osa Youth Development Initiative (EYDI) it is a community based entertainment Non-Governmental Organisation that is located in Ikoyi, Lagos.

We have successfully carried out a series of projects, one of it is Walk & Charity Concert which yeilds commendable support and participation. I am the President of this NGO.

Tell us about your other businesses?

I am the CEO of Akebula Ltd, and an organisation I registered in 2004, it is a communication outfit, which is into social marketing and distribution, events media buying and entertainment.

Why We Interviewed Gov. Ambode – City...