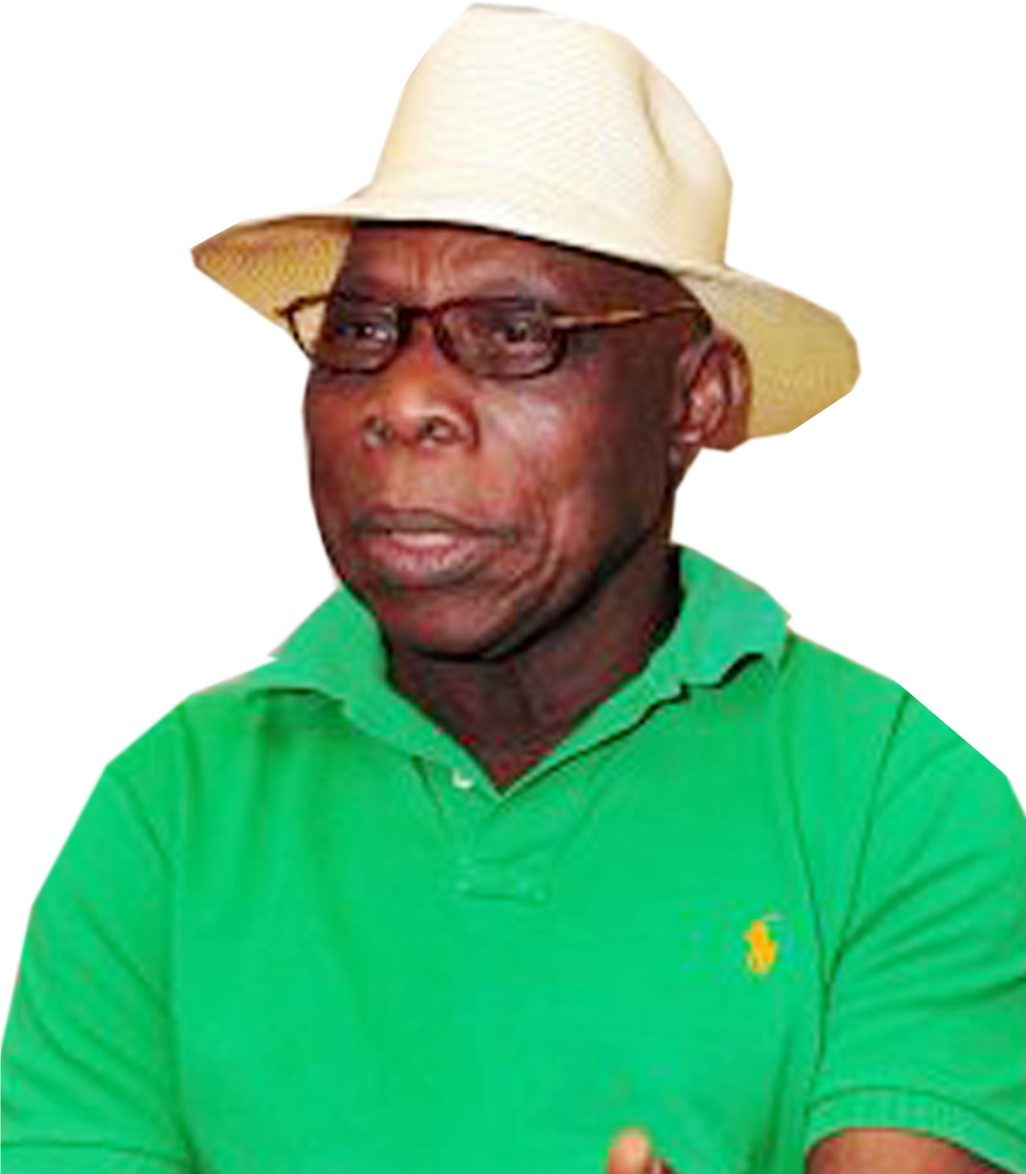 Former President, Chief Olusegun Obasanjo rattled everyone a few days back when he wrote a controversial tribute on Senator Buruji Kashamu who represented Ogun East Senatorial District in the 8th National Assembly.

The former President wrote in his Condolence letter: “The life and history of the departed have lessons for those of us on this side of the veil. Senator Esho Jinadu (Buruji Kashamu) in his lifetime used the maneuver of law and politics to escape from facing justice on alleged criminal offences in Nigeria and outside Nigeria.” But no legal, political, cultural, social or even medical manoeuver could stop the cold hands of death when the creator of all of us decides that the time is up,” he said while praying that Allah forgives Kashamu’s sins”.

A few people cautioned Obasanjo that he should not have reacted undiplomatically to Senator Kashamu’s death because in Africa we don’t speak ill of the dead.

But City People has found out that up till now OBJ has not forgiven Buruji for taking him on, in his lifetime and for abusing him severally in interviews and paid announcements. For a few years, Buruji took on OBJ on behalf of Buhari. This also came as a surprise. Not many know that Senator Buruji Kashamu and Chief Obasanjo were once close before they became political enemies in the last 7 years.

Let’s tell you more. When the going was good, Obasanjo and Buruji Kashamu were very close allies who had a common enemy in Otunba Gbenga Daniel and some other political personalities. At that time Buruji was in OBJ’s good books so he turned a blind eye to all those allegations.

What happened was that the U.S government had been on the trail of a certain Esho Jinadu for so long, since 2001 or thereabout, Obasanjo was well aware of it.

In 1999, the British government had initiated moves for the extradition of Kashamu to the United States for trial for drug-related offences. But the evidence given in favour of Kashamu in 2003 by the National Drug Law Enforcement Agency (NDLEA) under the Olusegun Obasanjo administration cleared him of drug charges.

Consequently, the British Court rejected the request to extradite Kashamu on grounds of uncertainty about the identity of a man who was freed after 5 years in jail.

Kashamu had disappeared from view to returning home from the United Kingdom in 2003, where he managed to wriggle free of a US extradition order. Initially, he stayed off the public radar but apparently persuaded by political allies he started the Omo Ilu Foundation and was distributing empowerment products, rice, and even taxi cabs as inducements for prospective voters in Ijebu Igbo, his hometown, to join the PDP.

He was feted by the then governor of Ogun State, Otunba Gbenga Daniel, who appointed him a member of the Governing Council of Tai Solarin College of Education. His influence widened, especially because of his willingness to spend without restraint. In between, he caught the attention of former President Olusegun Obasanjo, whose relationship with Gov. Daniel had gone sour over the fact that each wanted a different person to be governor of Ogun State at the expiration of Daniel’s term.

Kashamu then teamed up with Chief Obasanjo to the understandable chagrin of Otunba Daniel, as Kashamu was said to have spent $20 million to support the former President in his battle against Daniel.

The feud re-attracted public attention to Kashamu, having made money from producing Kamsal, a cigarette brand, in the Republic of Benin. He was arrested in the United Kingdom with $230,000 in cash. Kashamu claimed that his 1998 indictment by a grand jury in the Northern District of Illinois for conspiracy to import and distribute heroin in the US was a case of mistaken identity. He claimed that the person involved in the alleged offenses, to which a dozen people pleaded guilty, was his deceased younger brother, who strikingly resembled him. He has changed his name even before his UK crisis from Esho Jinadu to Buruji Kashamu.

Among those who pleaded guilty was US citizen, Piper Kerman, whose prison memoir was adapted for Orange is the new black.

Senator  Kashamu maintained that the UK court saw that the US had withheld evidence that a principal conspirator in the said drug importation had been unable to identify him in a photo lineup.

It was also gathered that Chief Olusegun Obasanjo who was a serving President at the time corroborated his claims, stating that the man in UK custody was Buruji Kashamu while the Esho Jinadu they were looking for was his late brother.

It was on that basis that the UK court refused a request from the US for his extradition in 2003 and freed him after five years in jail.

Thereafter, Kashamu returned to the country as a free man and was admitted to the People’s Democratic Party (PDP) as a full-fledged member. He funded the party and became a political leader.

That was how political leaders who frustrated the request of his extradition from the United Kingdom, welcomed him back home and used him to build political structures.

Chief Obasanjo in 2010 was reported to have mounted the rostrum in Ogun State, extolled Kashamu as a political leader and prayed to the Almighty God to reward him for his generosity.

The national leadership of the party acknowledged Kashamu’s immense financial contributions to the PDP. In 2014, as a result of political disagreements in the Ogun State chapter of the PDP, former President Obasanjo asked the national leadership of the PDP to stop extolling Kashamu as a political leader, because he was “a habitual criminal wanted abroad to face criminal charges leveled against him…

Obasanjo had in a letter on January 7, 2014 to the then Chairman of the People’s Democratic Party, Alhaji Bamanga Tukur, threatened to withdraw his membership of PDP in Ogun and South-West over what he described as the treatment of Kashamu with reverence.

Describing the late ex-lawmaker as a criminal wanted abroad. In that letter, Obasanjo said, “I cannot and I will not subscribe to a wanted habitual criminal being installed my zonal leader in the party; a criminal for whom extradition has been requested by the US Government.

“I will consider withdrawing my activity with PDP at local, state, zonal and national levels until the anomalous and shameful situation is corrected.”

But swiftly responding to the former President at the time, Kashamu accused Obasanjo of engaging in a wicked campaign of calumny and blackmail against him over his perceived loss of political relevance in Ogun State and the South-West.

He said, “It is now clear to all and sundry that why I have become the target of Obasanjo’s wicked campaign of calumny and blackmail is his perceived loss of political relevance in Ogun State and the South-West. In his 18-page satanic letter to President Goodluck Jonathan, I was the other person-indeed-the only one (after the President) – that he singled out for his venomous attack. But if the truth be told, I am not the architect of whatever political woes that he is suffering today. Like David, I am just a tool in the hands of the Almighty Allah.

“In his usual hypocritical manner, he talked about not being able to work with me because of his principles and decency. But the questions Nigerians should ask him are: Where were these principles when he used me to fight Gbenga Daniel? Where was his self-righteousness when I took the party structure from Daniel and handed it to Obasanjo? Where was his decency when he brought Gen. Adetunji Olurin to me and asked that I should roll my structure behind his governorship ambition? Where was his morality when he introduced me to South-West PDP leaders like Engr. Segun Oni, Navy Capt. Caleb Olubolade and a host of others? Where was his discipline when he hosted me several times in his Hilltop mansion, taking me into his bedroom and innermost recesses? Where was his decency when he accepted donations from me to his church and other concerns?

“Where was his gumption when he mounted the rostrum to sing my praises, praying for me as he did in May 2010, during a reception for the former Minister of Commerce and Industry, Senator Jubril Martins-Kuye? I can go on and on!

He was still in the eye of the storm before his eventual demise.

READ ALSO: HOW I HIT IT BIG IN COMEDY ON INSTAGRAM – POPULAR IG COMEDIAN, MR. MACARONI

Why OBJ Has Refused To Forgive BURUJI KASHAMU Even In Death was last modified: August 24th, 2020 by City People