Why Osinbajo is yet to assent to 2017 budget – Presidency 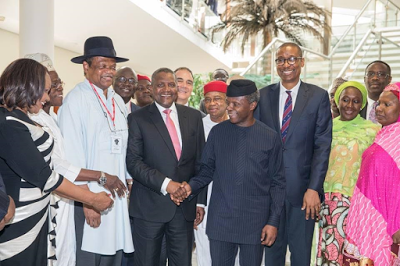 The Presidency has explained why Acting President, Yemi Osinbajo is yet to assent to the passed 2017 Appropriation Bill.

It explained that consultations for the signing of the document were still on-going.

The Senior Special Assistant to the President on National Assembly Maters, Senate, Senator Ita Enang, “Further to several enquiries regarding action on the 2017 Appropriation Bill by the Executive, be informed that Assent to same is not yet scheduled as consultations and engagements are on going. Be please informed.”

The Senate had on May 16, 2017, explained that the need for authentication of the passed 2017 Appropriation Bill was the rationale behind the delay in the transmission of the document to the Executive arm of government for consideration and assent.

Speaking with newsmen on the delay in transmission, Chairman, Senate Committee on Media and Public Affairs, Senator Sabi Abdullahi, APC, had said that the Joint committees on Appropriations still must carry out its assignment properly by not relenting on its oars.

Senator Abdullahi had said, “After the budget is passed, the appropriation committee has to do some authentication, to avoid just any kind of document flying around. Any moment from now (Tuesday afternoon) today or tomorrow, it would be transmitted to the Presidency. Let us allow those who have been given certain responsibilities to do their job, which must include certain protocols.