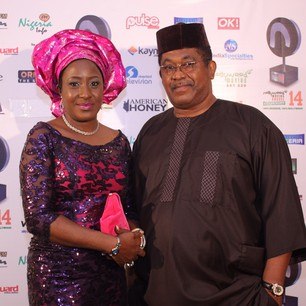 Patrick Doyle and his estranged wife, Iretiola Doyle may have reconciled and restored their marriage if what he posted later on his Facebook page where he openly begged his wife is anything to go by. The couple who have been having issues for many months may have been back together in each other’s arms following an open display of love on their wedding anniversary.

Ever since it was reported that the couple had gone separate ways, none of them addressed the issue on their differences but last week, Patrick Doyle pencilled a love note to his estranged wife, Ireti where he spoke about his inadequacies, how he made it difficult for  the marriage to work, how loving and caring Ireti has been since they got married hence his desire to want Ireti back in his arms. However, it was revealed that Patrick Doyle’s attempts to save his marriage to Ireti kept failing. Everyone noticed that the broadcaster tactically withdrew from the limelight in the last couple of months, trying to make his marriage work. Meanwhile, Ireti has been more focused on her career and has reportedly moved on from the over 15-year-old marriage.

The veteran entertainer, Patrick met Ireti on the set of a movie he was producing after he lost his first wife. He took everyone down memory lane as to who and what his estranged wife, Ireti is to him and why he wants her back.

He wrote “AN ODE TO A GREAT LADY—This is my tribute to a great Lady, my life has almost always revolved around strong women. The first strong woman in my life was the enigmatic Angela Bassey Doyle, who while still grieving as a young widow gave birth to me and stayed unmarried to nurture me. She stayed around as a strong pillar in my life until I was well in my 40’s before she passed away. My life would be incomplete without mentioning the mother of 3 of my sons, the very forthright Rosamond Emechete, who in spite of her fragile health gave me 3 very handsome sons and sadly passed on 7 months after the birth of our last son, Eyitemi. Shortly after the passing of Rosamond, God sent me an angel. Not only did this angel dry my tears, comfort my soul and lift my spirit at the lowest point in my life, but she showered my boys with the highest quality of care that I have ever seen a mother give her children. I have been young and now I am older, and I have never seen a woman more loving, caring and devoted than this lady. She not only ignored the taunting of “true friends “ who queried what she was doing with a “broke ass” like me. Frankly, if she was my sister, I would have asked her the same question.

Have I always justified or honoured her courageous decision to stick with me through thick and thin? The answer is a big resounding NO. If anything I have been most undeserving of the affection of this most uncommon woman. Have I taken her Love for granted? You bet I have, why? because like most men, I am prone to being a jerk. I cannot count how many times she has had to pick up the slack when I have failed in my duties as a husband and father. She has with the greatest sense of responsibility being the rock of our family. Without a doubt, she is the most generous woman I know, a dependable friend, a loyal ally and the most loving and sensual woman ever.

Lately, I had been less than worthy of her affection and was deservedly put in the proverbial “dog house”. As usual, she has with compassion taken me out of the “dog house” and reinstated all my rights and privileges as the Lord and Master of the home. I know that at the back of her mind, she’s mentally preparing for my next “cock-up”.

I hereby pledge that there shall never be another “cock-up”. Her days of an undeserving and underperforming partner are over. Her love and devotion over the years will never go unrewarded.

My Angel has proven that a good woman can by her conduct “ convert an unbelieving husband”, that is not to say I am an unbelieving husband, maybe recalcitrant would better describe what I was. I am now a truly “ born again” husband. I now publicly proclaim that I am married to The Best Woman Alive. Now, I know that God truly loves me for sending me the “ Angel of My Life” (apologies to Paul Play).

Monday the 21st of December will make it 15 years since this classiest lady uttered the words “ I DO” to me in the presence of God and Man. The last 15 years have been anything but smooth, true the ride has been bumpy with My Angel bearing the brunt of the rough times, but by the Grace of God, those days are over In Jesus Name.

Isaiah 42 verse 9 says “ Behold the former things are come to pass, and new things do I declare: before they spring forth I tell you of them”. Heaven has spoken and so shall it be.

On behalf of my sons, my 2 beautiful daughters that My Angel gave me and indeed the entire Doyle, and Henshaw clan of County Wexford, Ireland and Liverpool, UK, as well as Warri and Calabar, Nigeria, we salute and honor this most illustrious daughter of Akure Land, this Moremi of our time, the one and only Anike Ade Oluwaninsola Iretiola Doyle on the occasion of her 15th wedding anniversary. Your Divine Labour of Love Will Be Rewarded, Good Measure, Pressed Down and Running Over, In Jesus Name.”

The couple who hit it off 15 years ago was all over the news 2 years back when many social media platforms kept buzzing when the news of their marriage allegedly hit the rocks. It was one of the big separations in the showbiz industry as the couple’s marriage was an enviable one amongst others in their industry. It was gathered that the couple had gone their separate ways in a private manner with a mutual understanding and Ireti has moved out of her house into a new apartment. The marriage which has lasted for 15 years was set to have hit the rocks due to irreconcilable differences. Though it was unclear why the marriage hit the rocks but according to sources, we gathered that not only did the couple go their separate ways, Ireti moved out from her home since 2014 and because she moved straight to a new apartment in Anthony furthered authenticated their separation. It was the same year her first daughter from a previous relationship, Bimbo got married.

The marriage has been experiencing hiccups a few years back before they went their separate ways. Iretiola Doyle who reportedly moved away from her husband and children said in one of her interviews why she no longer appears at events with her man which many attributed to some of the cause of their separation.

“We are both busy people and you find that, in any one given weekend, we’ve both been invited to three or four different events where all three or four people are expecting to see us so we play it smart, we share it; if you’ve seen one you’ve seen the other.”

Some also attributed the irreconcilable differences to the high-end luxury lifestyle of Ireti having been one of the hot faces in Naija’s soap operas and award-winning cinema movies which keep her busier away from her home. Her move then made her colleagues believe that all was not well in her marriage though she reportedly confided in some of them.

Their marriage and how they met to hitting it off over 15 years ago was an interesting one. It was Patrick that brought Ireti to the limelight having discovered her talent when she was very young. They both kicked it off from there and married 2 years after they met 22 years ago. Patrick was once married and lost his wife before he married Ireti.

He said, ‘’After my late wife passed on, I was totally disgruntled but she was there for me. She supported me all through that period and that is why I said that in everything, God has really consoled me because I have a very beautiful and supportive wife. I discovered a very beautiful wife in the midst of the crisis. I am consoled and a very happy man”, Ireti is also not left out, she has this to say,” I went for an audition in school; it was in my third year in the university. Patrick Doyle was the producer and director of the play at that time. This was a period of time when schools were shut excessively. Rather than waste my time and wait for school to re-open, I decided to do something meaningful, so I came to Lagos. I did an audition and got a role. I told Patrick that I had an interest in writing. I also told him that I could write scripts, so he employed me on an ad-hoc basis. I worked with him for about two or three years; he was my boss, then his wife passed on and the rest is history’’. Together they have six children.

READ ALSO: MAMA SUSAN OYEMADE HITS IT BIG IN THE US!

Why PATRICK DOYLE Wants His Wife Back – How He & IRETI DOYLE Parted Ways 2 Yrs Ago was last modified: May 13th, 2019 by Tayo Oyediji

Mama Susan Oyemade Hits It BIG In The Us!

US Based Couple, OLUSEGUN & BUKOLA BADIPE Open Up