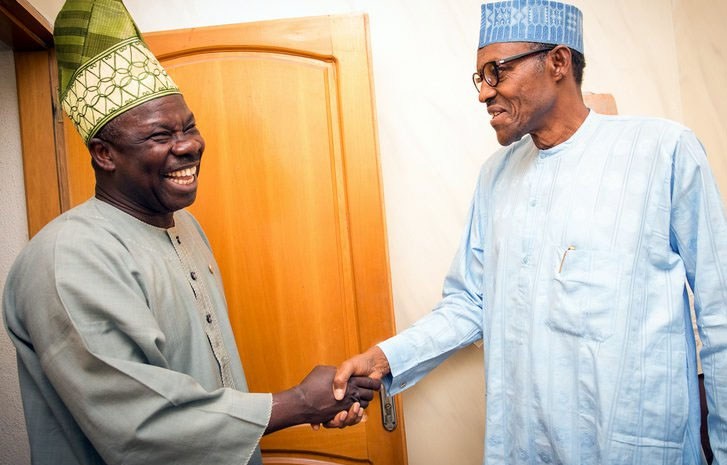 •The Story Of Their Over 15 Year Relationship

It is not every Governor in Nigeria that can enter Aso Villa as he likes. Gov. Ibikunle Amosun does that. He freely enters and leaves Aso Rock as he likes.

It is not every governor that has free access to even enter the inner section of Aso Villa.  Gov. Amosun does. It is not every governor that can bump in on the President anytime he so wishes Gov. Amosun does. He is an exception to the rule. He frequents Aso Villa, the official residence and office of Pres. Muhammadu Buhari anytime he so wishes. He storms Aso Villa anytime he wants. He eats breakfast with Buhari. He eats lunch with him when he wants. And he  shares dinner with him, when he desires to.

That is how close Gov. Amosun is to Buhari. They have been close for over 15 years. Pres. Buhari calls him Ibikunle whilst Gov. Amosun calls him, My Oga.

To let you know how close they are, wait for this. In 2018, Amosun visited Buhari over 35 times, in quick succession. What made the visit frequent was the political situation in Ogun State. Amosun wanted to use his closeness to Buhari to get Mr. President to overturn APC’s choice of governorship candidate in Ogun State. He wanted APC to field his man, Hon. Abdulkadir Akinlade and drop Prince Dapo Abiodun, his agelong friend, who he no longer likes.

Not only has he visited Buhari several times, he has taken traditional rulers from Ogun State to go and plead with Buhari at the Villa. What shocked many was how Buhari received Dapo Amosun’s man, who is in APM at the villa and raised his hands up. A few days earlier, he had warmly received Dapo Abiodun and Aremo Olusegun Osoba.  He also raised his hands of Abiodun up. Only Amosun could have pulled that stunt,. And he knows it. Amosuns game plan is to keep playing the Buhari card to score political points. What many do not  know is that he and Buhari are close. Though, he calls Buhari, My Oga or your Excellency, they behave like father and son. There was a period last year when Amosun spent 2 straight weeks with Buhari in Aso Villa.

We can tell you authoritatively that Gov. Ibikunle Amosun right now is the closest serving Governor to Buhari.

So close are they that Amosun had to relocate to London in 2016 to be with his boss and mentor, when Buhari was ill. Also in 2016, the President and the Governor of Ogun were away abroad on official assignment and they went to Mecca together afterwards. They both travelled together and they came back together. Unknown to many people, Gov. Amosun is one of Pres. Buhari’s trusted political associates.

Close watchers of our political terrain would have noticed their closeness since May 2015 when this new government at the Federal level  was inaugurated when Amosun got the Finance Ministry slot for Mrs. Adeosun his former Finance Commissioner..

Since May 2015, when Buhari became President of Nigeria, Amosun has spent a lot of time in Abuja giving support to Buhari’s administration. At most of the major events in Aso Rock, Amosun  has always been a visible face. He has also been involved in all the various trips that the President made abroad.

But their closeness didn’t just start now. They have been close for the last 15 years. Both have been close since their ANPP days, when they were struggling for power. Buhari had wanted to be President on ANPP’s platform, Amosun too had tried all his best to win in Ogun State.

When they both could not realise their ambition in ANPP, they both moved into another party. They were both in CPP together.

But that is not the extent of their closeness. We can authoritatively reveal that Pres. Buhari likes Amosun’s toughness and candour. He loves the fact that the governor is hyper active.

Not only that both are Muslims, who deeply value their fate. That is why they often travel to Mecca together.

Again, not only that.  Buhari who is not quick to trust, believes so much in Amosun and trusts him.

That is why Buhari feels comfortable staying in Amosun’s lovely house in London, anytime Buhari visits London for check ups. Buhari loves so stay with Amosun and the Ogun governor makes his stay comfortable.

That Buhari and Amosun are very close became clear a few months back when Amosun brought Buhari to Ogun State on a Presidential visit to mark Ogun State at 40.

Not only did Buhari spend 2 good days and went round the State to commission projects, at the state banquet held in his honour and to mark Ogun State at 40, Buhari commended Amosun for the remarkable way he has transformed Ogun State.

Not only that. When Buhari set up his cabinet Amosun nominated candidates who were  made Ministers. He and some other close associates of Buhari got some key slots filled.

For instance, it was Amosun who suggested Mrs. Kemi Adeosun as Finance Minister Recall that she was Finance Commissioner in Ogun State during Amosun’s 1st term.

Not only is Buhari & Amosun close, their wives are. Aisha & Mrs. Funsho Amosun are also very close.

Amosun recently stated that his relationship with Presdient Muhammadu Buhari has nothing to do with Politics.

Amosun, who has been an ardent supporter of the President Buhari’s administration, described the President as a family friend-someone he knew even before venturing into politics. The governor was one of the first persons to have reportedly visited Buhari in UK. “I must say that my relationship with President Buhari is not even about politics. I have known him way back, even before all my leaders. We have been together. He is like a father to our family.

“Anything he is doing I am there and anything we are doing, he is also there. So, it has nothing with politics, it is just like a family thing. But you know, people will want to read politics into everything,” he told Sun.

According to the governor, President Buhari’s integrity and lack of interest in material things made him worthy of emulation, and was the attracting force building them together. He added, “Well there is something anybody will not take away from him; his integrity. He walks his talk. Nobody will say Buhari is a corrupt leader, he is unassuming and he carries himself with no airs and doesn’t bother himself about material things. “That is one thing that is worthy of emulation. That alone, maybe, is what I really like in him.”

How I Got Into The Real Estate...