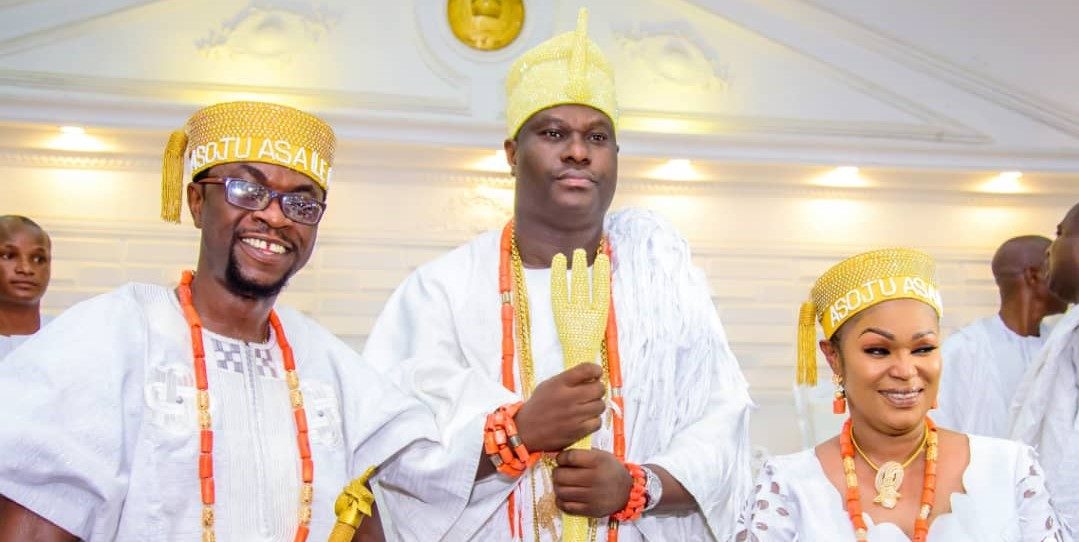 On Saturday 30th March 2019, popular broadcaster, Dotun Taylor and Lagos celebrity lady, Morun Ranti Ashabi were installed as the Asoju Asa Ile at the Oodua by the Ooni of Ife in Ile Enuwa Palace. Below, both Dotun and Morunranti talk about their new title. They spoke to City People Publisher, SEYE KEHINDE.

Lagos celebrity lady, MorunRanti Ashabi is in a happy mood right now. She ought to be. She is very happy for having been so honoured by His Imperial Majesty, the Ooni of Ife, Oba Adeyeye Ogunwusi. “It is something that is so big for me. I have no words to describe the depth of my gratitude, and how honoured I feel. Stretching that kind of hand of warmth, and love towards young people is something that is unprecedented. I am highly honoured. Like they say, with authority comes responsibility. So I know that there is a lot of work to be done”.

Are there other more specific assignments she needs to carry out, beyond promoting our Culture & Tradition? “Our assignment can also be described as PR. Kabiyeesi can only go out so much.

There are certain things that he will like to do that he would have to assign to people around him, which is one of the reasons that we are around him as young people who are educated and vibrant. He will always ask us, my Ambassadors you need to represent me here. My ambassadors, you need to create this document and present it to people. There is quite a lot to do. Kabiyeesi is a man of ideas. He has a lot of ideas about what he wants to do and showcase”.

Dotun Taylor is equally appreciative of the Ooni. On how he feels at the honour done him by Kabiyeesi, the Ooni, he says “I have been seriously overwhelmed.” “After the honour, I think I now have a better understanding of what Ooni means. It is an ancient set up that has been put together to attract Honour and Respect to the Yoruba people.”

“From the moment he made the pronouncement of the chieftaincy title, the truth is that the whole of my social status changed for the better. I realised that now, whatever I say, people tend to want to hold it to mean that this is the word from the Ooni. That is the dictate of the office and what we do. It has been wonderful. It has been great. It’s like a dream come true for me”.

How did his journey into Cultural and Traditional life evolve to make the Ooni realise he is worthy of this honour? “It started a long time ago. That is why I keep telling young people to be appreciative of their Culture and Tradition.”

“Let me use this opportunity to say to young people that we are the sole custodian of our destiny. If you are able to have an idea early enough, that this is what comes to you naturally do it.”

“If this is what you do, then be sure that a lot of people are watching you. Just continue to do what you do.”

“They asked me what sort of company is this that I set up when they were all going Western. I explained to them the meaning and the fact that I am just committed to History, Tradition and Culture.”

“I have a B.A. in History from the University of Ilorin, which is a conscious decision. I consciously went into school to study History because I wanted to delve into Africanism, Culture and Tradition. I think it’s just a case of being dogged, being determined and knowing what you want from life and being talented in that area a bit. I have worked in Television. I had worked as a filmmaker. I had worked as a Radio Broadcaster. In all of this, I am just a historian and a cultural enthusiast who always uses the most available medium to pass on the message. So for instance, if I didn’t have a camera, I will use the microphone on radio.”

“If I don’t have a microphone, I will write a book. So, basically, there is only one thing I am saying, African Tradition is beautiful, its renaissance, its preservation and development. I will just say my interest in culture has brought me this far. I can say with my experience that you can make a profession and a living out of just share an interest in what you believe in. That is my story. That is the story of my life.”

Why The OONI Of Ife Made Us Cultural Ambassadors – DOTUN TAYLOR & MORUNRANTI ASHABI was last modified: April 22nd, 2019 by Seye Kehinde

How To Live Up To 75 & Beyond In NIGERIA – Wellness Coach, SUSAN OYEMADE Reveals