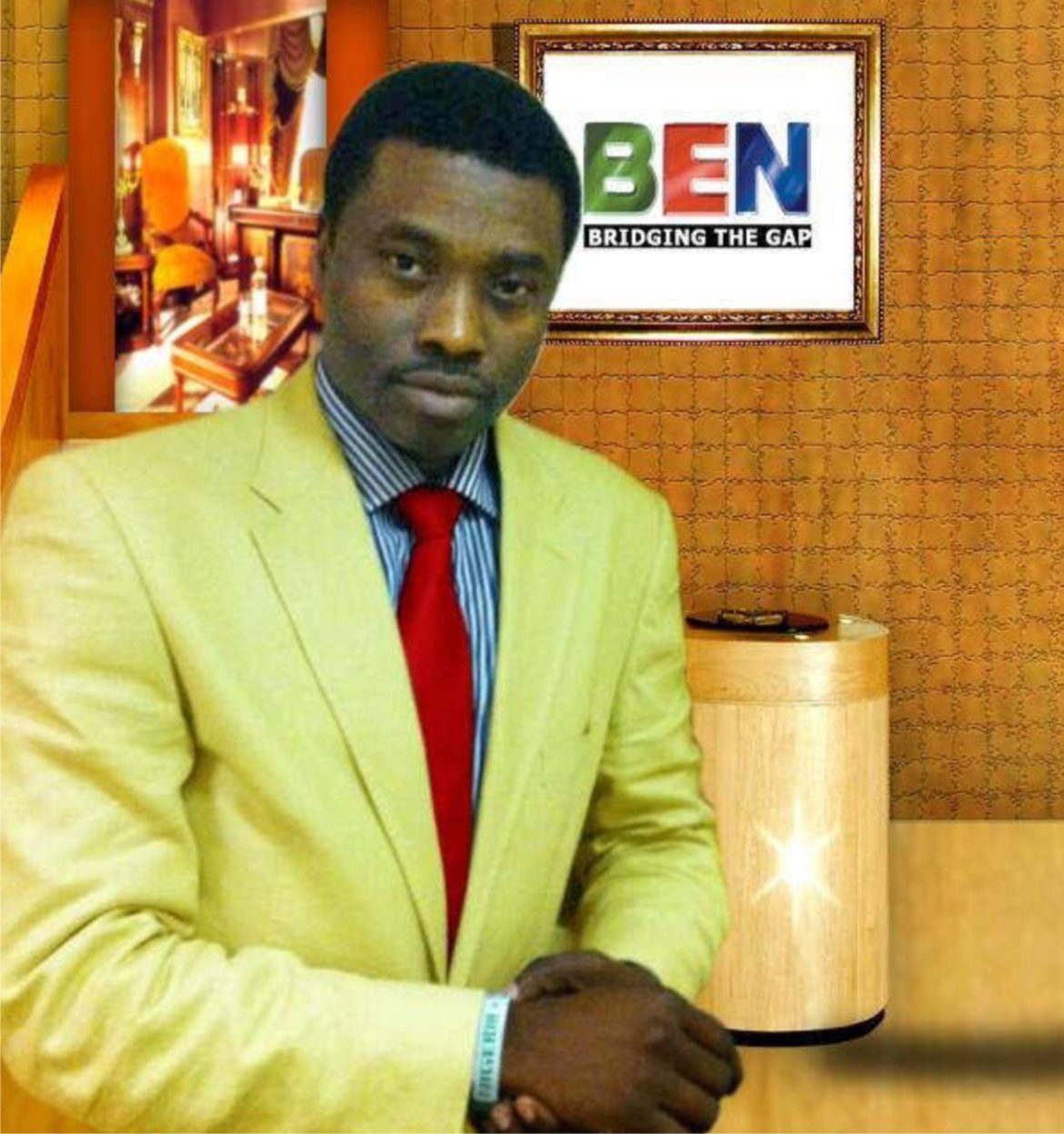 One of the top Nigerians in Diaspora and Founder of the first ethnic satellite Media Company in Europe, Dr. Alistair Soyode, went to Europe in his twenties to become a renowned footballer. But no sooner than he got there, being a footballer did not pan out, so he delved into entrepreneurship and the media world . Speaking with City People’s Society Reporter, ADEOTAN OSUNYOSADE, he tells the story of how he started the 1st black TV station in UK BEN Television, which broadcasts across Europe, Africa and Nigeria.

Sir, I would like you to let us into your background

What business you need to set up, what you need to do and all that, so I ended up becoming a serial entrepreneur trying to create businesses from Telecoms to television. No one was doing Telecom. I was the first Nigerian to publish the mobile phone magazine in Nigeria called the Mobile Telecom News. The moment Nigeria moved to Telecom era, I came back to Nigeria to quickly publish a magazine that deals solely on Telecommunications and I guess that was probably my first challenge to know that you just don’t introduce something new in Nigeria without having a solid money to support it, but then, I am glad that, at least, that record stood and the magazine was there and it helped quite a lot in transformation of Telecoms industry in the early days, but out of that it allowed me to move into television and then becoming the first black person to set up a black TV station in Europe, which is still trending, working hard to make sure that we continue to bridge the gap.

Looking at your success story, how did the idea for BEN TV come up?

I think uhmm in those years in the early 90’s, the story about Nigeria was just too bad, all the varieties of criminal activities.  And I believe that we are not as bad as presented in the media because I am not and there are many other people, who are not and I thought the best thing was to create programmes that would highlight the success of Nigerians and then supply those programmes to Nigerian TV stations.

Out of that passion to change the story line from negative to positive, creating the yearning to say oh actually there is no TV station where I can go and do some research to find out if they have black programmes and that pushed me to say oh maybe I can launch a TV station, but I don’t have the money, but I had the idea. So, the idea was put together and I nurtured it for a few years before coming across a platform and the people who agreed to the formation of the company. Then, I was working as a consultant for African business roundtable Dr. Bamanga Tukur, and all the people bought into the idea of yes there is a need for that and that’s what pushed me to continue and by the end of the day I then launch the first black TV station Ben Television with the catch line ”bridging the gap”.

Because it has never been done before, it was like let’s wait and see. The black people were absolutely very excited about finally having a black TV station on satellite, so but when you don’t have money, your concentration is how do I keep this thing going rather than trying to make money by trying to explore the opportunity that here is something that has just been launched for black people. So the black people were very receptive, very happy and they continued to appreciate what BEN TV is still doing and they actually claim BEN TV to be their own channel rather than belonging to anybody and that’s how it has been till tomorrow.

If there is any community event or corporate event that has to do with black people, they will call BEN and for the mainstream, which is none Africans, if they have an event to do with the black community they will call BEN, so we are well positioned in the United Kingdom and, of course, with our latest journey into Africa we are positioned to bring content that normally Nigerians don’t produce in Nigeria because whatever we produce over there, we produce with a new thinking and a different dimension to how we present it and nevertheless, BEN TV is still a full reflection of what you see on black TV. We still have a long way to go and that’s why we are still up and doing to make sure that we get support and if we don’t, we just continue to make sure that we represent the yearning of Nigerians, yearning of Africans and the yearning of black people.

What were your challenges as a black TV in a white man’s country?

The challenges are few which are interlink in the sense that in our country here as I give an example. In our country here the police may arrest somebody and start beating the person and the TV may carry the story that these people were arrested and the police were beating them to get some answers, but that’s human right violation. You are not supposed to beat him just because you arrested him; he might be innocent until proven guilty.

There are issues to do with sexual orientation, which Nigeria is totally against for example religiously and culturally, but in the other part, where we are it is allowed. It is permitted, you can inter marry based on your sexual orientation even if you are of the same sex, so those are the challenges that we face trying to make sure that even the contents are delivered at when they were supposed to be broadcast. But the most important thing as in any business is the issue of funding, which as we continue to trend is a challenge and we hope one day we will overcome it because as the platform is representing the yearnings of Nigerians more than yearnings of any other country and that has given window to other broadcasters to be able to come into the market but those broadcasters have a solid foundation in Nigeria unlike what we have because we started from the other side trying to come into Nigeria.

Where do you see BEN TV in the coming years. Let’s say next 5 years?

To be honest, I hope that it continues to be there in the next 5 years and 10 years because we have been there for about 15 years and yet without any support or investment. So, I hope that in the next 1 year, we will be able to have a solid team, investors on board and then we can drive the platform the way it needs to have been driven. Right now, we are driving on what we have, but when you have a good team and good investment portfolio, then surely the sky is not the limit we can definitely go a long way.

How do you think media platforms can help bring investment opportunities to Nigeria?

Really, it is by showcasing what you have. Nigeria is yet to tap into our resources. As much as what we have, we are yet to market them and really package them for marketing. We haven’t done that yet. I know there are ministries and agencies that are doing the best they could, but they just probably once in a while, need government support in term of the policy they are trying to introduce need to be marketed not just within Nigeria, but outside Nigeria, but again if people want to really follow investment, they need to make sure that their investment is safe and secure.

So, for now even in Nigeria, some people have issues and not too sure about the security system, but of course, we have good policies but if you can’t implement them, then it’s as bad as no policy so hopefully I believe that the media has a role, but we need to package the product that we want to sell and let the investors know that their investment is safe and that can only be provided by the assurance of government making sure the policies they put on the table is worth it and they actually honour these policies and investment will definitely come. As the media, we definitely have a role and hopefully we can see that and the government can see that too so that we can work together to make Nigeria a choice destination.

Being the kind of person you are, your job must be very demanding, how do you cope with family and how do you relax?

I am very grateful to my family. Absolutely grateful to my wife for all the support directly or indirectly and for nurturing our children, but as much as possible I make sure that I am indoor at home to play my major role as a father and it is not easy to be honest because as you say it is a demanding job, but one has to be grateful to God Almighty. It could have been a different story, but for me it is a positive story and I am grateful that my children are doing very well. I have three kids, 1 is a Medical doctor, 1 is a Banker and the other is an Economist. All grown up and that’s what they want to do, so I am grateful to God.

For the purpose of this interview can you quickly talk about your project, YES Nigeria Movement?

Well the Yes Nigeria Movement is focused on developing and strengthening the Nigerian democracy. It wants to strengthen, even as political parties exist, but for them to find good credible, potential, quality leaders and managers of resources, so that they can be elected into offices. Then the Nigerian people themselves, that’s the electorate need to know that they have the authority, the power to elect those who should be in office. Without doing that, then we will continue to recycle the bad eggs among the good ones and at the end of the day, we are all hungry. You can be hungry, but don’t sell your life span. Collect what they offer you, but when you go and vote, it is only you and the paper not you and them. So, as 2019 election beckons on all Nigerians, the almost 70 million people who have registered are going out there to vote and if they actually go out and vote, the story in 2019 is absolutely going to change.

Why We Started BEN TV In LONDON 15 Years Ago –ALISTAIR SOYODE was last modified: July 21st, 2018 by Reporter

Why I Want To Go to The House of Reps – King Of Small Chops, SAHEETO