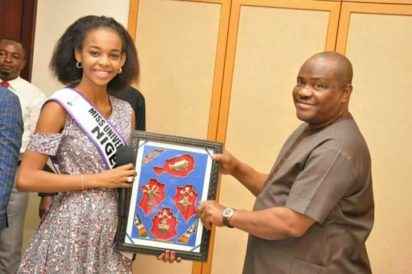 The African Beauty Queen Pageant has received a boost after the Rivers Governor, Mr Nyesom Wike said that his administration will always support the event.

The governor made the pledge when he received 54 contestants of Miss University Africa Pageant in Port Harcourt on Wednesday.

He said the presence of the contestants in Rivers was a positive testimony and endorsement for the state as a peaceful and tourist haven.
Wike urged the 54 contestants to serve as ambassadors of the state and promote it as a centre of peace, development, unity and sustained growth.
“We must express our gratitude to you for coming to Rivers State.
“As you return to your respective countries, we urge you to serve as ambassadors of Rivers State, tell people about the beauty and peace of Rivers State, tell them that the negative propaganda is politically motivated, ” the governor said.
The governor reiterated the resolve of his administration to support the beauty queens in their venture, adding that he was satisfied with the blend of charity work the pageant executed.
“Move around and enjoy the beauty of Rivers State, make sure that you anchor at Port Harcourt Pleasure Park, this is a tourism state, with a hospitable population, after now, you will desire to return to Rivers State,” he said.
In his remarks, Taylor Nazal, the Managing Director of Visions, Innovations and Concepts, organisers of the pageant, thanked the governor for accepting to host the contestants from 54 African countries.
The managing director said contrary to negative media reports against the state, the contestants and organisers had found Rivers a peaceful place.
“Since we came to Rivers State, we have witnessed an atmosphere of peace, this event would put Rivers State on the global stage,” he added.
“This is a non-Bikini event aimed at discouraging indecent dressing, that is why we have both Muslim and Christian countries participating in this beauty pageant,” Nazal said.
He said the contestants would engage in charity works, including visits to hospitals, the old people’s homes and orphanages, in Port Harcourt.
“They call you Mr Projects and we have seen several projects across the state, this is a project that is empowering women in the continent,” he said.
In her response, Miss University Africa (Nigeria), Miss Opara Ibinabo, a student of University of Port Harcourt, thanked Wike for making provision to accommodate the contestants from 54 African countries to converge on Rivers.
As a show of respect, each beauty queen presented gifts to the governor, who later took them round to see some completed projects within the Government House, Port Harcourt.