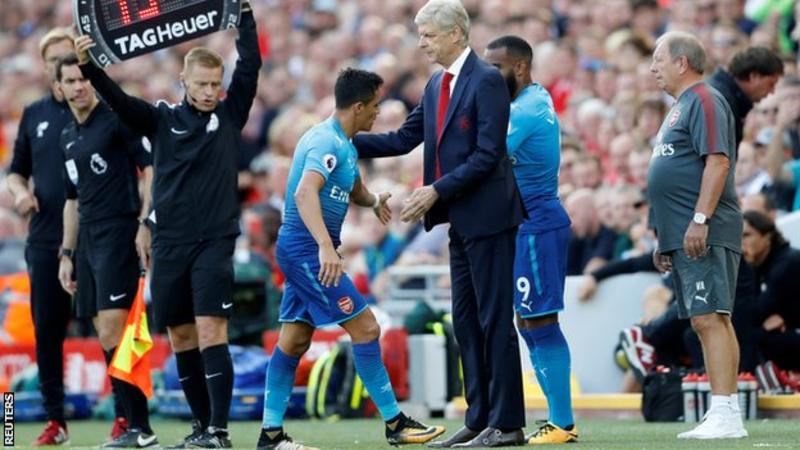 Manager Arsene Wenger has denied any rancor with winger Alexis Sanchez, saying the Chilean will have no problems reproducing his best form for Arsenal after an “uncomfortable” transfer window.
Chile forward Sanchez, 28, came close to joining Manchester City on deadline day, but Wenger has “no doubt about Alexis’ mind and mentality”.
Arsenal agreed on a £60m deal with City but it depended on them signing Thomas Lemar, who decided to stay with Monaco.
“He will be back very quickly to his best,” said the Frenchman.
“The transfer market is over, there was a lot going on. It’s very difficult to speak about because Lemar is now at Monaco and has to focus there, Sanchez is here and his focus is here,” Wenger added.
“Many things happen in the last second which I regret. That’s why I believe it’s time we change the rules and close the transfer window before the league season starts.
“The players have no clarity. Are they in or out? There are some who are tapped up on the afternoon of a game by people who want to get them out.
“It’s uncomfortable and every manager in the league would agree it’s time to kick that out before the season starts. You can’t have players in the dressing room who are half in and half out.”
Arsenal began their new league campaign with a 4-3 victory at home to Leicester, before losing 1-0 at Stoke and 4-0 at Liverpool, a defeat Wenger described as “disastrous”.
They host Bournemouth at Emirates Stadium on Saturday (15:00 BST kick-off).
“Do I suffer with performances like that? That is obvious, but unfortunately that is part of a career as well,” Wenger said on Thursday.
“You want your team to always perform, so of course you question your decisions and your preparation – but overall we have played only three games,” the 67-year-old added.
“There are 35 matches to go. I love my players, I believe in my players. We have the quality to respond and on Saturday we have a good opportunity to show that was an accident.
“Life is movement and quality of performance can change from one week to another. The fans can come to a quick conclusion or they can say let’s see what happens and stand behind the team. That is what we want.”

“He will be back very quickly to his best” – Arsene Wenger On Alexis Sanchez was last modified: September 7th, 2017 by Damilare Salami

Woman Gives Birth While Standing in the Middle of the Street, Picks up Her Child and Walks Away (Video)