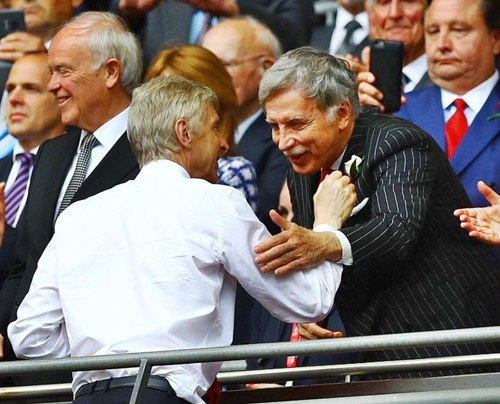 Ahead of Thursday’s annual general meeting at the Emirates, Arsenal FC owner, Stan Kroenke told “rabid” Arsenal fans that they will never force him out, and maintained that he will never sell his shares.
According to The Sun UK, Stan Kroenke, alongside son and club director, Josh Kroenke, rejected claims they are in football just for the money, and when asked if there was any chance he would sell, he said: “No. Absolutely not. That’s just not our model.
“Just go look at our history. You don’t see us selling things. We are committed long-term.”
The 70-year-old U.S tycoon, added: “Sports fans are wonderful. They are rabid. That’s the good news. They are rabid. That’s the bad news. They always have opinions.
“The only part I worry about is how it affects the players and the coaching staff and that’s the last group you want it to have a bad effect upon.
“There’s a percentage that don’t like you. I love Arsenal, love being involved with Arsenal.”
Alisher Usmanov, who owns 30 per cent of the club, saw a £1billion bid for Kroenke’s 67 per cent share rejected earlier this year and there have been no other offers since.
Kroenke also says the Gunners are determined to keep contract rebels, Alexis Sanchez and Mesut Ozil and revealed how they made a tough call in extending Arsene Wenger’s contract.
While speaking in a new interview he added: “It’s easy to change coaches and people do it all the time. We just think that Arsene is doing a great job and he’s the right guy. I think he is more focused than ever.”
But the club’s Supporters Trust, want Sir Chips Keswick and Josh Kroenke voted off the board.
The AST will take action at today’s AGM in a bid to show “significant governance change is needed.” One third of the directors must seek re-election.
An AST statement read: “We will vote against the resolutions to reappoint Sir Chips Keswick and Josh Kroenke to the board.
“We feel the present directors are not acting with sufficient independence or representing the interests of the small shareholders, or the future custodianship of the club.”
I will Never Sell Arsenal, Sack Wenger – Arsenal Owner Tells Dangote, Others Ahead of AST Meeting was last modified: October 26th, 2017 by Arinze Ago