It Will Take Four Generations To Separate Nigeria – Buratai 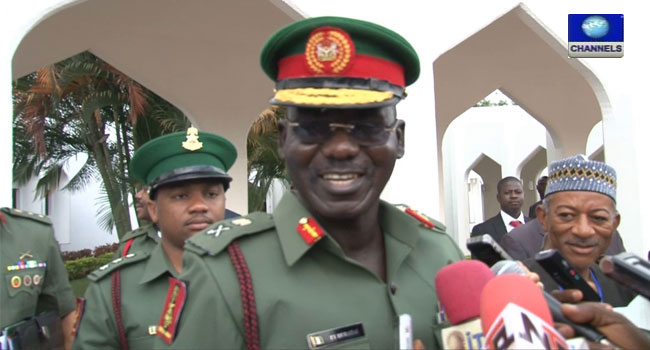 The Chief of Army Staff, Tukur Buratai, on Monday advised those bent on destabilising the country to refrain from their acts.

Lieutenant General Buratai gave the advice after he received the “Millennium Hero’’ award conferred on him by a coalition of over 80 Civil Society Organisations (CSOs) at the Army Headquarters, Abuja.

The award was in recognition of Mr. Buratai’s leadership for the army in decimating and degrading Boko Haram terrorists from their strong hold in the Sambisa forest.

Mr. Buratai vowed that the agitators and those with intent to destabilise the country would not succeed as the Nigerian Army and other security agencies were ready to protect the nation from disintegration.

“Those individuals and groups that are bent on destablising our country I think they have to wait till may be the next three or four millennium for them to do that.

“That is if may be the next generation of officers and men will allow them at all.

“Having been given the Millennium Hero award, I want to call on all the agitators for separation and other acts of distabilisation, they better forget it, not in this era, not in this millennium,’’ Mr. Buratai said.

The army chief assured that insurgency and terrorism were now at the beginning of their end.

He said the situation now signaled “the beginning of victory and continuous victory over all groups that are bent on destabilising the country, especially in terms of security’’.

“I want to say that we would continue to do our best to maintain security atmosphere that is needed as provided for in the constitution of the Federal Republic of Nigeria.

“We have been tasked to defend our country.

“We have taken a number of measures to ensure that the remnants of the Boko Haram terrorists that are on the run are finally cleared, many have surrendered, many of them have been captured.”

Earlier, Olabode Adeyemi, the Executive Director, African Media Roundtable Initiative, who presented the award on behalf of the CSOs, noted that Mr. Buratai changed the tide of the war against the terrorists.

“The leadership of Buratai has now been generally viewed as one that came with the midas touch and changed the tide of the war.

“His ability to boost the morale of the troops and caused what we now have as degraded insurgents is one that must be commended by all,’’ Mr. Adeyemi said.

He noted that guerilla warfare was difficult but having defeated the Boko Haram terrorists, the Nigerian army had proven that it had the capability to defend the territorial integrity of the country.

Mr. Adeyemi, however, called for the establishment of army formations in Kogi which he said had witnessed some acts of terrorism and other forms of criminality.

He condemned the Amnesty International (AI) for accusing the army of human rights violation.

“We also wish to condemn the incessant and unwarranted attacks by the Amnesty International against the Nigerian Armed Forces.

“We see the recent outburst of the AI as a deliberate attempt to incite the public against the security agencies,’’ he said.