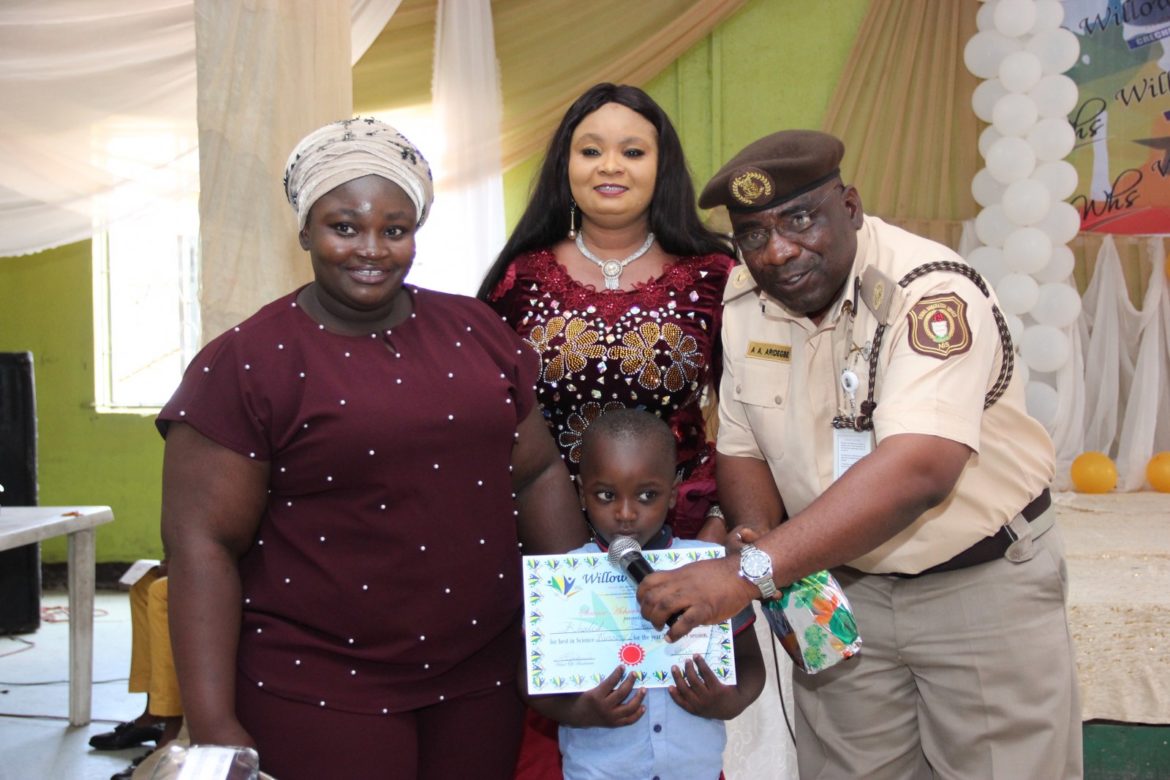 The training institute of the Federal Railway Corporation, Ebutte Meta in Lagos became a mini-pilgrimage on Wednesday, July 17, 2019, as pupils of the prestigious school graduated from one level to another and also held a world-class orchestra concert which only contained pupils of the school. There is no doubt Willow Hall Schools is a place to be for all children who aspire to be great and improve in talents as different level of performance by the pupils only explained the quality of the management and staff. City People’s DAMILARE SALAMI alongside Senior Photo Journalist, ABDULRASHEED SANI covered the event and here are excerpts for your enjoyment.

Willow Hall Schools is a private but secular school and respect for individual religion is very important to the management and staff of the school. To declare the 2019 graduation awards and musical concert opened were UthmanBalogun and Samuel Adewunmi who took the opening prayer in both the Islamic and Christian ways.

The event was officially declared opened by the orchestra group of Willow Hall Schools which lead everyone in attendance into singing the national anthem.

There was no dull moment all through the event as fast-rising comedian, Mide Coker was up to the task. Saddled with the responsibility of anchoring the event, Mide left all those in attendance with something to cheer with his rib-cracking jokes at intervals.

Erelu Susan GbemisolaAlabiis a school owner, politician and Events Planner. She runs Willow Hall Schools. It has a Creche, Pre-School, and Primary School located at 227, Borno Way, by Adekunle bus stop, Ebutte Metta, Lagos. She is the National Women Leader of the Buhari/Osinbajo Mandate Group. She is also doing well as an event planner. She is happily married to Architect AyodeleAlabi, and the union is blessed with children.

Erelu is friendly, down to earth and also a disciplinarian who does not play with her business. She is also a fashionista. She is blessed with a very good shape and a glowing skin, everything she wears fits her so perfectly.

Erelu Susan GbemisolaAlabi, while delivering her opening address to everyone in attendance at the august occasion appreciated the management, staff, parents and pupils of the school and promised to continue setting standards in all spheres. She further appreciated the parents and staff for their continuous support towards the school and the physical, mental and psychological development of the pupils.

The event lived up to its expectation starting with pick and spell game of Nursery 1 pupils who correctly spelt every word they picked from the basket. The Nursery 2 pupils came up with something more spectacular and dramatic. It was a dance drama that spelt the school’s name and different professions many children would aspire to pursue. The session was not just entertaining, it was equally educating.

Mrs Bisiolu is a parent whose children attend Willow Hall Schools. She was invited to the podium by the Proprietress, Erelu Susan Alabi to present the first set of awards tagged Most Improved/Well Behaved Pupils. The winners were; Dian Bisiolu, Teniola Ajose, WonuolaAnimashaun, FareedahSavageRukayat Musa, AminuBuhariand Muhammad Ibrahim in the most improved category.  Lilian Abah, Amanda Nwanyewa, ChritianahAdeniji, ChidinmaNkumeh, Halima AdamakiYusurahLadanbakiWuraolaSalau and Naomi Idowu got the awards across all the classes.

Special Guests Present At The Event

With the caliber of personalities present at the ceremony, Willow Hall Schools is definitely not just another school springing up somewhere in Lagos, it is set out to break barriers and create better standards for others to follow. Present at the event was the Assistant Comptroller and PRO/Head, Protocol Unit, Nigerian Immigration ServicesMrDotunAridegbe. He came in the company of Mr Roland Ejidoh, the Deputy Superintendent, Nigerian Immigration Services andMrOlatundeOpayinka. Also present was OtunbaTemitope Daniels, Willow Hall School PTA Chairman, AlhajaBasiratPerreiria, PTA Vice Chairman.

The Lagos state Governor, MrBabajideSanwo-Olu, who was absent due to other state functions was ably represented by Hon. Dare Falade and OloyeGoyegaAdeniji. His Ogun state counterpart, Mr Dapo Abiodun, also sent a representative in the person of Aare RotimiIshola.

Following one another without time-wasting was the Hausa cultural dance presentation also anchored by Willow Hall School pupils and the School new reports anchored by year one pupils, AkoladeAlabi and TemidaraOpe-Daniels.

The response from parents and guests revealed that they were not just being entertained by the children but were also being educated. Year 1 pupils presented ‘rights of your child’ stating the different rights of children on placards and also verbally communicating them to everyone in attendance.

It’s time for the award presentation and everyone was alert. The PRO of the Nigerian Immigration Services who expressed satisfaction at the talents displayed by the pupils presented certificates of merits to the winners. Pupils from KG to Year 5 bagged this awards and the winners are; Ryan Eweoso, Khalid Smith, FaridatYakubuSetemi, TemidaraOpe-Daniels, FaridatBisiolu, OkechukwuOyene, RahmatLawal and Samuel Adeoni.

The head boy, Muhammad Ibrahim Abubakar a young Hausa boy with British accent mounted the podium to deliver a very short but emotional speech. He explained how Willow Hall School has impacted his life and how the training he has received has shaped his ambition. In the same manner, the head girl, Deberechukwu Onyene explained to the younger pupils how lucky they were to be trained by the staff of the school who are not just teachers but friends to all pupils.

The pupils that bagged the best in literacy awards across all classes got their certificates of merits from one of the parents, MrsAlabi. She was invited to the podium by the Proprietress, Erelu Susan Alabi. The winner of the awards are AbidemiPerreiria, Princess TunmiseAgboola, AkoladeAlabi, NifemiAbati, KehindeAbubakar, Pearl Ewuoso and DaberechukwuOnyene.

Providing musical interludes at different times was DJ FOXZY whose skills on the wheel of steel kept both parents and pupils dancing while VIP guests moved their bodies on their seats. He is a popular disc jockey based on the mainland in Lagos. He is known for his scintillating performances at events and many popular clubs.

Hon Dare Falade, the representative of the Governor of Lagos at the event was invited to the podium to present awards to the best pupils in Numeracy. One Pupil in each level bagged the award and all got a certificate of merit. The winners include Hilary Idowu, AkoredeAlabi, Princess TunmiseAgboola, Ibrahim AbubakarJedimi, FolawoyePerreiria, TemisanOpe-Daniels and DeberechukwuOnyene.

The event was indeed a musical concert but it could as well pass for a cultural day as different cultural dance troupes in Nigeria were represented. It was time for the Igbo culture dance group and the energy displayed by the pupils of Willow Hall School was simply awesome.

Chairman ofWillow Hall Schools Parents, Teachers Association, PTA, MrTemitope Peters Idowuwas on ground to deliver his remarks and he did within the time frame and without doubt, he held his audience spellbound from start to finish. He remarks cut across the development of the school and comfort for the pupils.

Amongst the award winners of the day were the overall winners in each level. This was the reason for the Overall Achievers Awards in across all levels. The PTA Vice Chairman, Alhaja Basirat Perreiria gallantly mounted the podium to present the award to winners. The session was coordinated by Mr. Sadiq Bello and the following pupils emerged winners. Hamzat Elegbeleye, Akorede Alabi, Folawe Perreira, Kehinde Abubakre, Pearl Ewuoso and Deberechukwu Onyene.

The concert will not be completely reported if mention is not made of the Nigerian Urban Dancers and the Yoruba Cultural Group performance. Both were highly spirited and deeply educative. The Yoruba traditional dancers took the audience to far away Ilaje land in Ondo state where fishing is the money-spinning trade. The dance portrayed fishermen doing their thing with a beautiful canoe-like costume to explain what the dance was all about.

It was another emotional moment for the proprietress, Erelu Susan Alabi as she presented the final year graduands to the outside world. Unable to express herself, EreluAlabi was full of tears as the pupils received their gifts. The pupils themselves were so emotional that some of them wept as they mounted the podium to take a final bow. The year 5 pupils include AnabuleNwandu, Muazzam Ibrahim, Samuel Adewunmi, Naomi Idowu, DaberechukwuOnyene, Muhammadu Ibrahim and Munachi Okoye.

MrsOpe-Daniels, Mrs Okoye Round Off Event

The event came to a close after one of Willow Halls School teachers, MrsOpe-Daniels took the vote of thanks and another parent, Mrs Okoye took the closing prayer.