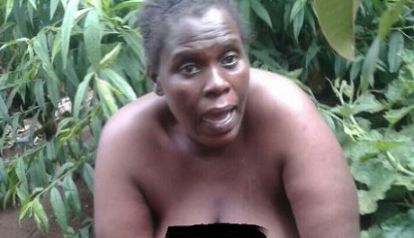 Manipulations of fellow human beings in Africa, when will it come to an end? It was indeed a walk of shame for an advanced woman who was accused of killing three people through witchcraft.

She was beaten mercilessly and stripped in public.
The woman identified as Sisi, who’s a general hand at a clinic in Nkomazi region in South Africa, was marched through the neighbourhood unclad before she was handed over to police.
Confirming the development, an eyewitness said, “Sisi is a general hand at a clinic in the Nkomazi region of Mpumalanga in South Africa. She was allegedly caught doing witchcraft in the Mafambisa area. She allegedly admitted having overseen the death of three people so far.”
Police don’t even know how to handle her matter as the government don’t meddle into witchcraft saga.
Woman Beaten & Stripped For Allegedly Killing Three People Through Witchcraft was last modified: February 15th, 2017 by Arinze Ago