Woman beats her teenage son to death in Ogun, Flee to Iyana Ipaja 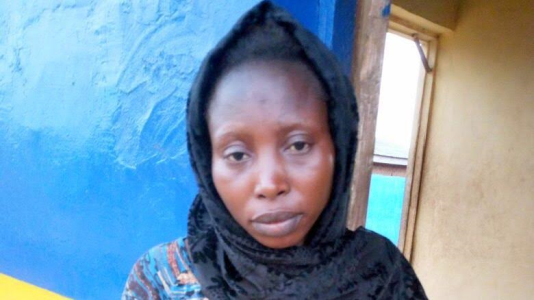 The Ogun state police command have arrested a mother, Bisola Olukoya pictured above, for beating her 16 year old son, Tosheeb Olukoya to death at their home at No 40, Ifelodun street Onifad Itele, Ogun state on March 17th. According to the state police command, Abimbola Oyeyemi, Bisola used a plank to hit her son in his head while she was trying to correct him. Sadly he fell down and died.

She connived with her husband and buried their dead son in a shallow grave in their compound before fleeing home to Iyana Ipaja in Lagos state where they were arrested. Neighbors reported the case to the police and an investigation was launched. Bisola was traced to Iyana Ipaja where she was hiding. She is to be transported to Ogun state where she would be charged to court.

Woman beats her teenage son to death in Ogun, Flee to Iyana Ipaja was last modified: March 24th, 2017 by Reporter