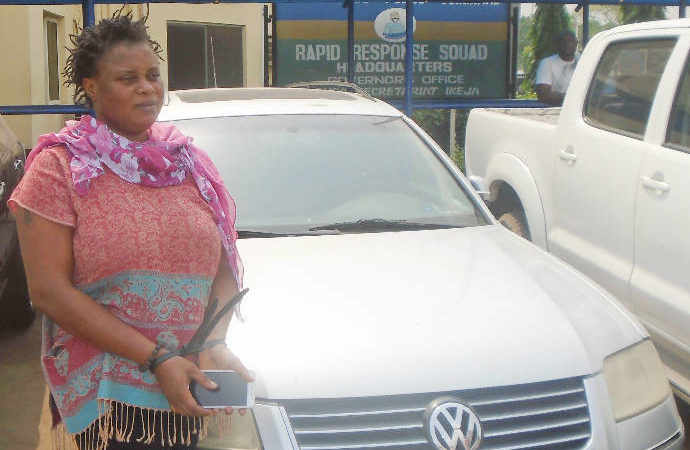 The operatives of the Rapid Response Squad of the Lagos State Police Command have arrested a lady in Agbor, Delta State for drugging her man friend in a hotel in Ojodu area of Lagos State and carting away his car, laptop and mobile phone.

The lady, Mitchel Harrold, 37, from Warri, Delta State, was on Tuesday arrested after the operatives traced her through a car dealer in Lagos.

It was learnt that the suspect had on January 19, 2017 at about 5:30pm, together with her man friend, a medical doctor, checked into a popular hotel (name withheld) in Ojodu, Berger, with the plan to spend the night.

Harrold had after settling down gone to get a malt drink and yoghurt, while the boyfriend was taking his bath.

According to the victim, Daniel Biyi (not real name): “I went in to take a bath and when I returned, she had gone to buy some drinks.

“I took the malt drink and yoghurt and I slept off.

“When I woke up, my laptop, car key and phone had gone.

“I rushed straight to meet with the receptionist and gateman to ask them what was going on, that was when I realised my car had been taken away too.

“They told me someone came to pick the car for her.

“And she said she was going to get food.

“Immediately, I reported the incident at Omole Police Station.

“I am getting to know her for real now.

“Since the incident, I had been trying to call her but to no avail.

“One of the numbers was switched off, she wasn’t picking the other.”

Arrested alongside suspect, were Adesanya Gbenga, a generator repairer, whom she engaged to drive the stolen vehicle, and the suspect’s brother, Mukoro Okpako, in whose house she lodged whenever she was in Lagos and who was also assisting her to perfect the Customs papers for the stolen Volkswagen.

According to Gbenga Adesanya: “I was surprised to see her opening the gate of the hotel herself for me to drive out instead of the gateman.

“That wasn’t the first time I helped her take vehicles out of Lagos to Sapele.

“It was about the third time.

“First, it was a Toyota Camry ‘Big for Nothing’.

“I helped her moved it from Ajah to Sapele, Delta State.

“The second one was an ‘End of Discussion’ Honda Accord and thirdly, Volkswagen Passat, 2001 model.

“I moved that too all night to Sapele.

“I was introduced to her in 2016 by her elder brother, Mukoro Okpako, who worked as clearing and forwarding agent.

“I was told she needed the assistance of a good driver to take to Warri.

“I later met her in Ajah where I helped her take a Toyota Camry to Sapele.

“About four months later, she summoned me to GRA, Ikeja.

“She gave me a Honda Accord (End of Discussion) to help her collect fuel from his brother at Wawa, Ogun State.

“I took the fuel and returned the car.

“She then told me that she has gotten another driver to take her.

“The last vehicle is the one that has created a crisis for me.

“Although I have been wondering where she has been getting these cars, but she told me that she hired them from Delta whenever she comes to Lagos and that a driver brought her to Lagos and returned to Delta.

“I don’t know she steals cars.”

Sources revealed that Harrold had already informed his brother, Okpako, of her desire to sell the car, urging him to assist her in perfecting Customs papers for the Volkswagen Passat two days before she was arrested in Agbor, Delta State.

The sources added that the vehicle was recovered in Warri.

It was further learnt that she had removed the number plate and put it in a car mart for sale.

The source hinted that Harrold attempted concealing the stolen phone when she was arrested, adding that investigators were in Airport Hotel, Ikeja to find out whether the suspect hired a Toyota Camry there as she claimed to the police.

It was revealed that further findings showed that the vehicle was not hired there, raising the likelihood that she must have gotten the other two vehicles drugging her lovers.

Harrold told investigators that she met her man friend on Badoo, adding that they have been in relationship for a year.

She said: “Why I stole his vehicle was that we had money issue.”

She declined being in possession of the doctor’s laptop.

Badmos noted that the State Command has resolved to arrest any suspect that comes to Lagos to commit crime and moves into in any part of the country.

The case has been transferred to State Criminal Investigation Department for further investigation and prosecution.