Woman electrocuted while trying to rescue a colleague 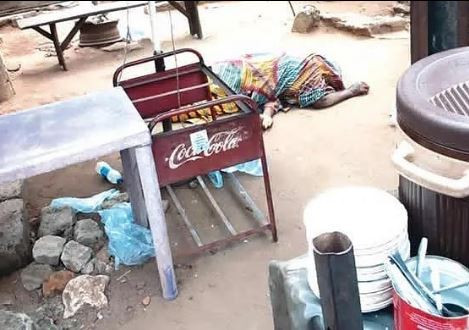 A yet to be identified food seller was electrocuted in Umuahia, the Abia State capital, on Thursday, March 28, 2019

The incident happened at the Michael Okpara Square, along Club Road, few metres away from the Umuahia Event Centre. According to reports, the deceased, who was a sales assistant at a food stand, was killed while trying to rescue a co-worker, who was shocked by electric current.

It was gathered that a high tension wire had snapped and fell on a stake wire attached to an electric pole under where the food vendors were doing their business. The first victim, who is said to be receiving treatment in an undisclosed hospital, touched the pole and was instantly shocked and cried for help.

The cry for help attracted the deceased, who went to save her assistant, only to be electrocuted. It was gathered that she died while being taken to hospital in a tricycle. Her remains were brought back to the food stand

Woman electrocuted while trying to rescue a colleague was last modified: March 29th, 2019 by Reporter