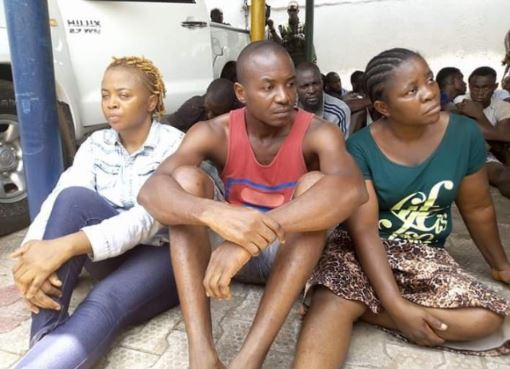 The woman whose video went viral for humiliating her sister’s husband’s side chic by stripping her naked and beating her up in public has explained the reason for her action.

The woman, identified as Ogochukwu Nwankwo, from Agulu, claimed she didn’t mean to beat the woman, but when she remembered the fact that her husband had taken her son from her to go and live with his girlfriend in Lagos, the trauma propelled her to pour out the anger on her sister’s husband’s side chic.

This is not really my character but sometimes temptation comes and you do things the way you didn’t plan to. Nobody is above temptation.

Woman explains why she stripped a woman naked and flogged her for sleeping with her sister.

The victim, Okafor Ogochukwu, a widow who lost her husband recently and is now caring for her 6-year-old son, also spoke. She said it was the husband, named Ifeanyi Azota, who invited her over before she was brutalized by his sister-in-law. She said the man and his wife, named Azotani Toochukwu, were present as the woman battered her.

She added that she doesn’t want momentary compensation and would rather her attackers are charged to court because they have destroyed her life by releasing the naked video of her being publicly humiliated.