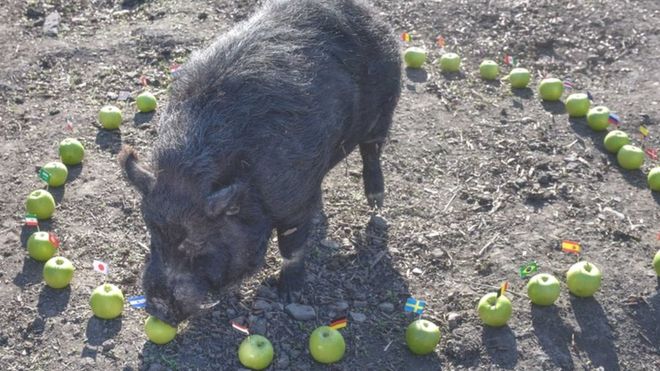 A pig with “special powers” has chosen the four nations that will reach the World Cup semi-finals – and England is not one of them.

He did it by eating apples marked with the flags of all the other teams.

So far his World Cup predictions appear to be on the nose – or snout – as Uruguay brought home the bacon with a dramatic victory over Egypt.

The pig breeder said: “Marcus is the seventh child of a seventh child and apparently they’re gifted with special powers, so maybe that’s where it comes from.”

Ms Stevens has about 100 animals on her farm, but Marcus holds a “special place in her heart”.

She said: “He’s got a lovely personality, he’s totally unfazed by all the fuss.

“He’s really chilled out and happy to go and do stuff. He takes it all in his stride.”

However, despite the breeder’s claim of a “100% success rate” Mystic Marcus has slipped up a few times.

In 2016, the micro pig backed Derby County to beat Hull City in the Championship play-off semi-final after choosing the apples with the club’s badge. The Rams lost 3-0.

They did win the second leg 2-0 though. Maybe that is what he meant?

Also, the teams he has predicted will make the World Cup semi-finals cannot all reach the last four without at least two of them meeting in one of the quarter-finals.

But, there is a chance he could choose the winner – in 2010, during the World Cup Finals in South Africa, an octopus named Paul correctly predicted the winners of eight matches, including the eventual winner Spain.