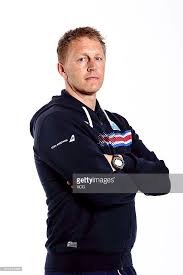 Iceland manager Iceland coach Heimir Hallgrimsson says it would be foolhardy for anyone to underestimate his team in the Russia 2018 World Cup  after they  earned a  point in their David  versus Goliath  fixture against  Argentina at  Spartak Stadium in Moscow  on Saturday.

Augsburg  forward Alfred Finnbogason  secured a 1-1 draw  for  the tiny European country  after  he rifled  home  in the  22nd minute to make history   as the first-ever  player to score Iceland’s  goal in the World Cup after Sergio Aguero’s 18th minute goal.

Powerhouse Argentina were gifted an opportunity to win the match from the spot through Barcelona superstar Lionel  Messi but Hannes Halldorsson emerged as Iceland hero as he palmed Messi’s shot away.

And Hallgrimsson, who  will lead  the World Cup debutants in the second group game against Nigeria at in Volgograd on June  22,  says  Our Boys  will aim to pull off another shock result.

“We are more unpredictable now, and hopefully we’ll show that in the competition,” the  51-year-old  dentist  said.

He said Iceland were able to come out with a point against Argentina because “We are bluntly honest about our ability”.

He said, “We know how we can win football matches. It is just a fact that Argentina have superior individuals with superior skills and if we go one-on-one with them you don’t need to ask who will win the game. We have to play in a special way and we have a clear identity.”

Hallgrimsson hinted that he  would abandon  the team’s traditional 4-4-2 formation  and play negative tactics against the Eagles  like they did against Argentina.

“We are a nightmare to play against and we can beat anybody when we have our day.”