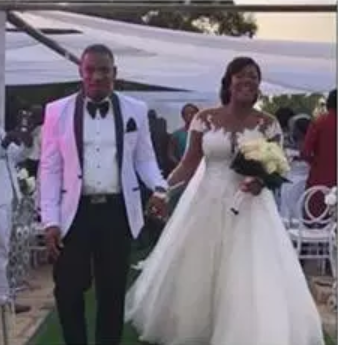 A lady has taken to a Facebook group to expose her sister’s husband who abandoned his wife in USA and went to Ghana without her knowledge to take another wife.

The man told his US wife that he was just going home to Ghana on vacation but he got married to another woman while there.

Betty Pretty Naadu Lartey, who is the sister to the man’s US wife, shared photos of the man and his new wife on their wedding day to a Facebook group called ‘Tell it all’. She revealed that her sister was the one who helped the man get a residential permit in the US and sponsored his master’s degree education. She added that her sister has a 1-year-old child with the man.

As proof of the man’s infidelity, she released photos of the man and her sister, who is his legal wife and has been married to him since 2011 in New Jersey.

With his first wife

INEC Will Not Create New Polling Units For 2019 General Elections