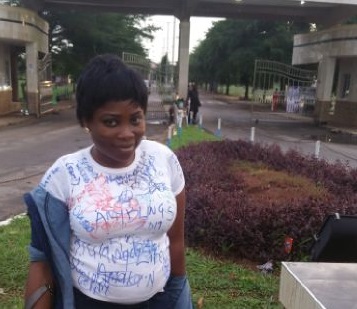 Seven years after she was given admission to study Sociology Studies at the Lagos State University (LASU) sexy actress, Motunrayo Balogun has finally signed out following the completion of her last examination which she wrote recently.

The very industrious actress joined the school in 2010 and she was expected to spend 5years in studying the course which she ended up using 7 years as a result of unwanted strikes the school experienced in the last few years.

Information has it that, Motunrayo, who got a certificate in Mass Communication at the Moshood Abiola Polytechnic (MAPOLY) Abeokuta, Ogun State first purchased University of Lagos’ form but she was denied admission when she couldn’t meet up with the cut off marks.

At that juncture, we learnt she was discouraged but a friend of hers, Oluwaseun Faderera Dawudu of a blessed memory forcefully made her Registered for LASU and she was fortunate to be among the chosen applicants.

This highly intelligent babe wrote her final paper (soc 410) Industrial Sociology on the 20/05/2017. In case you don’t know, Motunrayo Balogun is the producer of Pelekutu, Sababi and Asanlaye. She has featured in over 70 movies in her career

Four ways to get the best out of a quickie