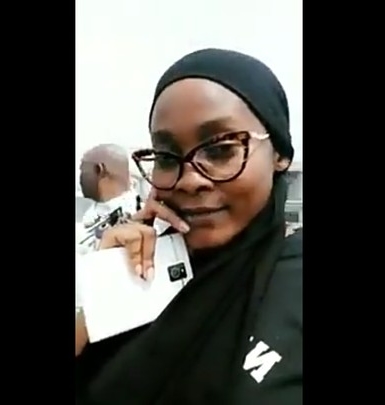 A Facebook user identified as Kehinde Rhoda Akinrinmade has taken to the social networking platform and shared the video of a young girl tried to jump off the popular Lagos CMS bridge in a suicide attempt.
According to Kehinde who was present when an incident happened at CMS, the lady was stopped by police officers, bus conductors, and drivers who rallied around her, and discouraged her from the dangerous act.
She added that the lady said she was frustrated by her life as her previous employer had sent her away without paying for her services as a house maid.
Here’s what she wrote after sharing the video below;
“This lady was about to commit suicide on CMS bridge, some cars were damaged cos we at first we thought she was blind and then some people rush to hold her and she kept crying, some of us got down from our cars ,trust me to ask questions she said she is fed up of life that she was a house maid, d place she worked last she became sick they took her to a church after they spent almost all her savings on her she told them she wants to leave to go find another job right in d bus now she thought life is not fair to her that she just want to die, thanks to NURTW staffs, conductors, Lastma and the Policemen that ran after her, we tried to calm her, talk with her and told her to trust GOD, I gave her my number to call me later I will help with d little I have, funny thing she doesn’t have a phone but I pray she gets someone to help her call me later.
Hmmmmmmmm, GOD pls help the needy, people are HUNGRY and ready to do the uncalled for. Pls pray for this lady My Facebook Family that she finds peace and help Amen”
Watch the video below;
Young Lady Rescued from Jumping-off the Lagos CMS Bridge in Suicide Attempt (Video) was last modified: November 7th, 2017 by Arinze Ago

‘APC has no Presidential candidate for 2019’- Femi Adesina