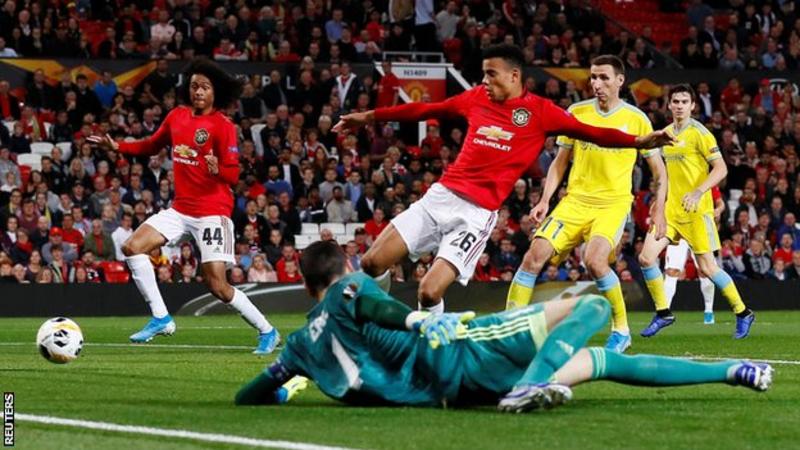 On a night the 17-year-old will never forget and with the visitors from Kazakhstan threatening to hold out for a draw, Greenwood produced a clever finish in front of the Stretford End to become United’s youngest scorer in Europe.

Earlier, Brazil midfielder Fred hit the bar from 25 yards before forcing a fine save from a free-kick, while England forward Marcus Rashford wasted a string of chances against the European minnows, who did not register a shot on target.

But frustration turned to celebration when Greenwood, who has been at United since the age of six, popped up with the winner.

Even after his goal, a much-changed United continued to waste chances.

In the other game in the Group L, Partizan Belgrade drew 2-2 with AZ Alkmaar.

It was a far from perfect return to the Europa League stage for United on their first appearance in the competition since goals by Paul Pogba and Henrikh Mkhitaryan defeated Ajax in the 2017 final in Stockholm.

United, of course, would rather be competing with Europe’s elite in the Champions League but the Europa League at least offers manager Ole Gunnar Solskjaer the chance to give some of his younger players experience of a European night under the Old Trafford lights.

Against the five-time Kazakhstan Premier League champions, United fielded their youngest side for a European game since December 2012.

Greenwood was one of six players aged 21 or under who started.

Having grown up in United’s academy, the Bradford-born forward had already given United fans a glimpse of his talent during pre-season when he scored against Leeds in Australia.

In the heat of a competitive European game, he showed tremendous maturity as he cut the ball back on to his right foot after holding off an opponent before dispatching a low shot through the keeper’s legs.