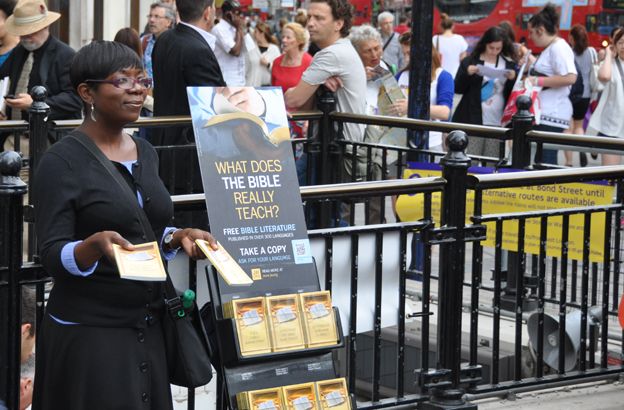 Jehovah’s Witnesses had its origins in the Bible Student movement, which developed in the United States in the 1870s among followers of Christian Restorationist minister Charles Taze Russell. Bible Student missionaries were sent to England in 1881 and the first overseas branch was opened in London in 1900. The group took on the name International Bible Students Association and by 1914 it was also active in Canada, Germany, Australia and other countries. The movement split into several rival organizations after Russell’s death in 1916, with one—led by Russell’s successor, Joseph “Judge” Rutherford—retaining control of both his magazine, The Watch Tower, and his legal and publishing corporation, the Watch Tower Bible and Bible Tract Society of Pennsylvania.

However, the movement has some very stringent rules the members have to adhere to. As rigid as these rules may seem, the true and faithful Jehovah Witness members are sticking to them to the last letter. Here are the 140 things Jehovah Witnesses can’t do:

(1) Belong to another organization or club for the purpose of socializing with nonbelievers.

(2) Have best friends and activity buddies who are not Jehovah’s Witnesses.

(3) Associate with people outside their organization when it is not necessary.

(5) Associate with coworkers after business hours in a social settings

(6) Disagree with their organization’s rules and code of conduct.

(7) Disagree with their organization’s doctrines.

(8) Contribute to the Presidential Campaign Fund on their tax return

(9) Join the armed forces and defend their country

(10) Say the Pledge of Allegiance

(13) Run for leadership in their organization. (JW’s are ‘appointed’ and invited to be leaders.)

(14) Run for leadership in any organization 15.Take a stand for any political issue inside their organization

(17) Campaign for a political candidate

(20) Be a union steward or shop steward

(21) Actively be involved in a union strike

(22) Use a gun for protection against humans

(23) Become a police officer if a gun is required

(25) Take yoga classes and practice the discipline of yoga.

(31) Read books, magazines, publications, and literature from other religions.

(32) Buy anything from a church store

(33) Buy something at a church garage sale

(35) Shop at the Salvation Army

(36) Work for the Salvation Army

(37) Work for another church

(45) Accept Jesus as their mediator

(50) Study psychology, philosophy, sociology, and viewpoints that might shake their faith

(54) Get married in another church

(57) Dating someone without the intent of getting married

(58) Having sex before marriage

(59) Breaking an engagement, separation, and ‘unscriptural’ divorce may result in disciplinary action

(60) Marriage to non believers is not recommended

(61) Be gay or lesbian. Homosexuality is not acceptable.

(63) Get divorced unless the reason is adultery

(86) Celebrate any holiday except the death of Jesus – Why?

(87) Partake in the bread and wine that represents Christ unless they are part of the 144,000

(89) Engage in holiday parties at school

(90) Take on a leadership role in school

(92) Do suggestive and immodest dancing in a public place

(95) Use of bad language (curse words) is discouraged

(102) State or imply that the Watchtower is not run by Jehovah God.

(104) Say anything negative about their organization. JW’s must ‘speak in agreement’ and be ‘like-minded’.

(105) Consider other religious beliefs as valid and truthful.

(106) Acknowledge any prayer spoken by a non believer as valid

(107) Take another Jehovah’s Witness to court (with exceptions)

(109) Own any religious picture

(110) Own any religious statue

(112) Believe in miracles (except those found in the Bible)

(117) Consult with a psychic or become one

(118) Study tarot cards, get a reading or give a reading

(119) Study numerology or get a reading

(122) Attempt to communicate with departed spirits.

(125) Believe or say anything superstitious

(135) Idolize any celebrity or love and admire them to excess

(137) Women can’t be ministerial servants (assistants to the elders)

(138) Divulge secret information to enemies and those not entitled to know.

(139) Greet or talk with disfellowshipped persons (with some exceptions)

Why do we close our eyes when...

5 Qualities That Make Women Boring in...

Men who sleep in noisy bedrooms could...