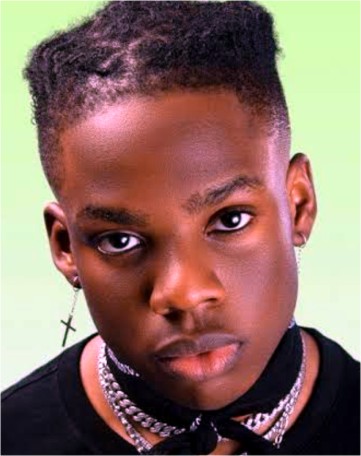 Despite that the year 2020, owing to the global pandemic, Covid-19 has recorded poor outing for the entertainment industry, some rising acts have displayed immense talent in the music space. The OGs have made their mark and are still thriving, but our focus right now is on the new voices that attracted our attention and have shown no sign of slowing down. These artists have unique sounds and special methods of delivery during performances. They have amassed relatively large fanbases due to social media and their online presence, which gave followers a glimpse into their lives and their creative process. City People Entertainment Reporter, PRECIOUS POMAA, brings you a list of 20 artistes who are making waves in the industry.

Fast-rising act from Rivers State, Stanley Omah Didia, well-known by the stage name, Omah Lay, was just a Port Harcourt boy, with nothing but his talent and passion for music. He announced his emergence on the music scene with singles such as Hello Brother and Do Not Disturb, which he released in 2019. He then followed it up with Alternate Cuts and Tonight, this year. He held everybody’s attention with his you and Bad Influence. Both tracks are off his debut Extended Play with the title Get Layd. Omlay happens to be the hottest in town topping all charts all over the world.

Divine Ikubor, popularly known as Rema, has not slowed down since he hit the industry with the bang, ‘Dumebi’. The popular song went all the way to top several music charts in Africa. Rema, who is signed on Don Jazz’s Mavin record label became more popular when his song, ‘Iron Man’ appeared on Barack Obama’s 2019 summer playlist. The youngster was crowned as the Next-Rated Act at the last Headies Award. After releasing two EPs, titled Freestyle EP and Bad Commando, and appearing on the cover pages of international tabloids, one could say that Rema is a force to reckon with in the Nigerian music industry and already a superstar. He recently dropped two songs which have taken over the whole industry, tagged: Woman and Ginger me.

YBNL singer, Adedamola Adefolahan, professionally known as Fireboy DML, took the industry by storm in 2019 after he had a breakthrough with his popular track, ‘Jealous’, a song about love and its attendant complication. The talented vocalist and composer who described his genre of music as Afro-Life is certainly here to stay after he literally penetrated hearts of fans with his debut album, ‘Laughter, Tears & Goosebumps. On the album, the Obafemi Awolowo University graduate proved his distinctiveness as he displays a diverse approach to the Afrobeat sound, with a perfect lyric blended with his sharp voice. Fireboy DML is on a mission to become the next superstar! His recently dropped song New York City has enthralled many girls raring to go for him.

Joseph Akinfenwa Donus better known as Joeboy has proved to music lovers that he is a bag of talent with a lovely voice that is easy to listen to. Banku Music under exclusive licence of emPawa Africa Limited, Joeboy grabbed fans’ attention after emPawa filmed his music video for ‘Baby’, which got 16 million Youtube plays and stayed at the top 10 of Apple Music’s charts in Nigeria, Uganda, and Kenya for weeks. He went on to drop another hit single, ‘Beginning’, which is one of the best songs of 2019 with massive airplay. With the aforementioned singles and his latest EP entitled ‘Love & Light’, and his latest drop “Call” the newcomer artiste has become one of the most talked-about in the Nigerian music industry.

Tolulope Ajayi better known by his stage name T-Classic, is a singer, songwriter and recording artiste. In 2017, T-Classic, signed on Mixnaija Entertainment released his lead single “I want you” produced by Killertunes. He has released 3 other hot songs tagged Nobody fine pass you, Hold On and an amazing EP that took the industry to another level.

Bad Boy Timz, born Olorunyomi Oloruntimilehin is a student of Bells University, where he’s currently studying Computer Engineering. His skits and freestyles for which he received nods from industry giants (including J Hus ) caught the eyes of the record label and early in 2019, he signed a deal with Anonymous Music. His recently released song tagged: MJ has taken over every playlist.

Nigerian-American based artiste, Sadiq Onifade, widely known as WurlD, literally stole the airwaves in 2019 after teaming up with award-winning producer, Sarz On The Beats, for an enticing new 8-song EP, I Love Girls With Trobul. The project was on the first spot of Nigeria’s iTunes charts and with highly-addictive jams like “Trobul” and “Ego” WurlD has been in the industry for a while but his efforts in 2019 have had massive impacts on his career after he dropped his first EP, Love Is Contagious in March 2019. A popular track in the 9-song EPEP, “Contagious,” sees the blue-haired WurlD blending elements of Nigerian juju music with pop and R&B, making for a captivating and energetic fusion. He bagged the Headies’ Male Vocalist of 2019 award and that took him on a huge leap as it exposed him the more to the global industry. After the award, the artiste, who is signed on Universal Music Nigeria has been featured by several top artistes, the latest being Davido in ‘Sweet In The Middle’, a song of Davido’s ‘A Good Time’ album.

Oxlade is a young singer, who found his path to become a ‘star’ at Surulere – a Lagos suburb – by performing at Wizkid’s Starboy Fest, a sold-out show at the O2 Arena in London. Oxlade turned out to be well accepted by fans after several songs. Some of which include ‘Mamiwota’ by Blaqbonez, ‘Causing Trouble’ by DJ Tunez, his biggest hit so far entitled: ‘Wait among others. He is a promising independent artiste.

Fast-rising singer, Eze Bernard, popularly known as King Bernard who wears a crown in Lagos as a symbol of royalty recently, released a new song tagged DOH a song which has taken over the music industry, making every young lady vibe with joy. The song has been on *@triller* Top Trending Banner since the release of The Challenge. Before the song was released it recorded, Over 200,000 views*  This happens to be king bernard’s 2020 first single  Over 200 Videos done on all platform already

Afropop singer and songwriter, Lawal Raheem, also known as Lyta, has had his low and high times after he quit his record label, YBNL, owned by the famous indigenous rapper, Olamide. The 20-year-old Kwara State indigene was well received by music lovers after he featured former boss, Olamide, in a song, ‘Time’. He is currently in Doro music, he recently dropped a song tagged “Worry” a song that talks about his love life.

Fast-rising talented vocalist and songwriter, Oniyide Azeez, is another newcomer with impressive vibes, who has a unique power of making listeners fall for his lyrics, particularly in a few seconds. Zinoleesky became a social media sensation with his unique voice and freestyles on Instagram with his partner Lil Frosh which earned them an organic growth. His fame increased after getting an Instagram repost of his cover to Fvck You challenge by Kizz Daniel. Zinoleesky relentlessly and successfully convinced countless listeners to become his fans in 2019 with impressive tracks and collaborations. The “Who Knows” crooner, turned down AMW/DMW offering before he was signed on Marlian Records of controversial singer, Naira Marley, in December 2019. He has dropped 2 songs on the label and they all happen to be hit songs. Recently, Mapriwo is taking social media to another level.

Ilerioluwa Oladimeji Aloba popularly known as Mohbad is a sensational artiste who came into limelight after winning the BaddyOsha Who Dey Challenge last year. After getting his fans, he’s been utilizing the buzz around him by bringing what’s trending into music, he has done that with songs like “Neon”, “See My Bouncer”,  ”Balan Ziaga” and Je Seun which happens to be recently released.

Bella Shmurda is a singer and songwriter who rose to fame after YBNL boss, Olamide featured him on his hit single ‘Vision 2020’. Having made an impression with his viral “Vision 2020”, before he went on to release collaborations with Zlatan and Mohbad. He is a graduate of Lagos State University, he recently dropped an Ep which gained massive airplay.

He is a fast-rising indigenous rapper. Lil Frosh teamed up with Zinoleesky and built himself musically by uploading freestyle videos on Instagram, then successfully attracted a lot of attention. Lil Frosh raps in the Yoruba language with clear and smooth flawless flows, coming up with well-cooked punchlines. His fame rose after he had a collaboration with Nigerian street sensation, Small Doctor on a track tagged “Firi Yahoo”. Now armed with a Davido co-signed DMW/AMW, 2020 seems to be the year the youngster from Agege transitions from being an upcoming act to a hitmaker.

Crayon is a songwriter and a recording artiste, Charles Chibueze Chukwu also known as Crayon is the new face of Afrobeats that brings street experiences with a blend of pop, Latin and Caribbean rhythms. Crayon is signed to Mavin Records; Blowtime Entertainment, owned by producer, Baby Fresh. He released his 6 tracks EP “Cray Cray” in the middle of the year and his hit track “So Fine” made massive waves across the country. Crayon may not have been given the chances and attention given to Rema, his fellow label mate but he has proven to have a unique melody in his music even better than that of Rema.

Moshood Adeola Adisa better known by his stage name, Hotkid is a fast-rising Nigerian hip hop rapper, Afro beats singer, songwriter, stage performer and recording artiste currently signed to Dr Dolor Entertainment. Hotkid who was discovered by Dr Dolor, the DDE boss in a viral Instagram video, got thrilled by his rapping skills. No doubt, he has shown the industry the versatility of his talent with his debut single: “Ozana” and his “Honourable” EP, which made the world know he has a lot to show.

Ayojayboi whose real name is Bello Jamiu Ademola, born 2000 started music at a very tender age of 10, He met His record label boss RKD, early  2019 which since then have been making good music. Ayojayboi is one artiste who has created a niche for himself in the industry. His hit song Taboo ft Zinoleesky and his EP Grinding all my life are enjoying massive airplay.

Fast-rising Afropop artiste Komolafe Oluwadamilare better known as Flykid is blessed with spirit-lifting songs. Flykid has been described as persevering, a resolute, dedicated, focused and hardworking artiste that doesn’t stop until his dreams are achieved. His consistency and drive paved way for him. A unique feature that has seen him rise to the top to feature top artistes such as Oladips and Davolee. 2019 was a good year for him, this year the industry shifted back to the motivation Inspired song and Flykid has sure carved a niche for himself.

Jaja Millz whose real name is  Ekundayo Abraham Adevatu who hails from Edo State started music in 2014. He is a rapper and songwriter, who is ready to take half of 2020 to another level.

AMVCA Is Meant For Only Yoruba Actors...