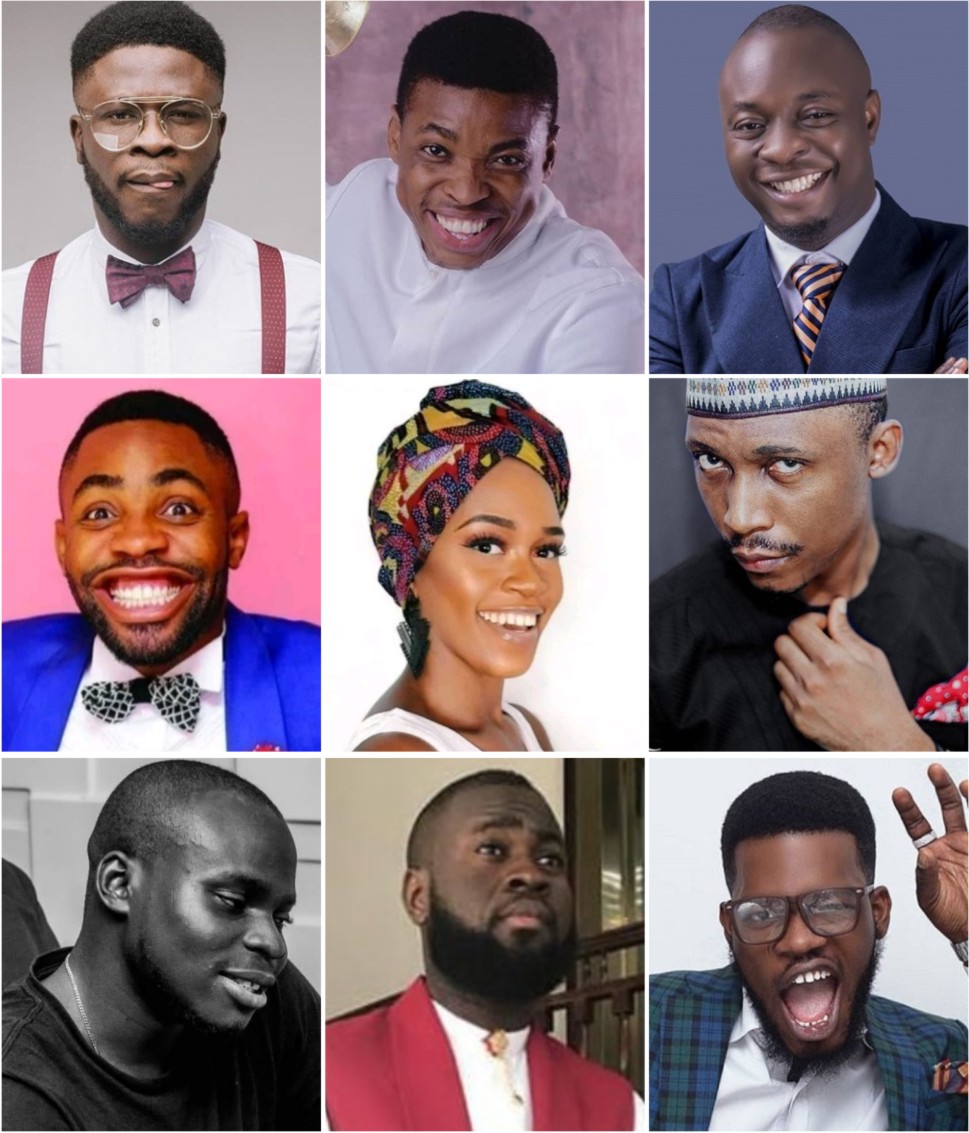 They are funny, creative and are internet sensations. They’ve changed the face of comedy from what it used to be and are “Instagram Comedians. Many of them have come from “Nothing” to become online sensations as we would call them. Not only that, they have become big brands and are raking lots of money on Instagram through multi-million naira endorsements, music video appearances, movie roles, digital advertising for big brands and lots more, hence, giving analogue comedians a run for their money.

City People’s ADEOLA FAGBIYE brings you a list of 20 top Instagram Comedians, plus how they are raking millions online.  Enjoy!

Beautiful and talented Gloria Oloruntobi with the handle @ Maraji has over 898k followers on Instagram. She has gained popularity and made bucks on Instagram with her funny short videos and she is one of the most hilarious comedians on Instagram.

The Covenant University graduate, shot into limelight in 2016 after winning a lip-syne battle. With her mumonicking skills and beautiful voice, Maraji has featured in musical videos like Falz’s “Something Light”, Yemi Alade’s  “Single” and “Searching” has earned cooperate node from big brands like Coca Cola and Indomie.

The self-acclaimed  “Number 1 ranter in Nigeria “makes a living out of ranting. He took a Snapchat filter and used it to build a brand for himself with over 889k Instagram followers. Lasisi Elenu has become a big brand in Comedy.

He has bagged endorsement deals with big brands such as Western Lotto and has denied with celebrities including billionaire Hushuppi.  He reportedly charges thousands of naira to make shoutouts and advertise products for big brands.

Ayo Ajewole popularly known as Woliagba-ayoajewole has over 726k followers on Instagram. He is an MC, actor, Director and refers to himself as the Prophet with the oil of a Gladness” Woli Agba took Instagram by storm with his IPM skits and second-in-command “Dele”. He advertises for big brands, churches at high prices through his hilarious videos in Yoruba.

Popularly known as Kenny Blaq, Otolorin Kehinde has become a household name. He is one of the most popular stars in the comedy industry. He is known for his impressive comedic performance using music with his amazing vocal dexterity. Kenny Blaq has over 400l followers on Instagram. He has performed at the Largest Christian Concert in Nigeria and has carved a niche for himself in the entertainment industry.

Another top Instagram comedian is Henry Obiefule who has over 242k Instagram followers and is popularly called Chief Obi due to his comical portrayed of a typical Nigeria dad. He has featured in videos of prominent artistes like 2face, Olamide and Jidenna. He also bagged an endorsement deal worth 1 million dollars with vomoz communications.

He refers to himself as “Nigeria’s” number 1 fine boy Agbero”. He is an actor, MC a comedian and a singer. He has over 577k Instagram followers. He recently released a single titled: “Pariwo” at Teni and recently went on musical tour in UK

Emmanuel Iwueke popular known as crazeclown has over 2 million Instagram followers, and is the most followed Nigerian comedian on Instagram.

Crezeclown has signed endorsement deals with top brands  like Nairabet and has hosted his own sold out shows. The Ukraine-based medical doctor has turned his passion into big bucks of money.

This comedian refers to himself as a “Professional Unemployed Graduated” and has over 553k fllowers on Instagram. He addresses societal issues through his skits and his hilarious, videos earned him a role in the videos in Nollywood blackbuster. “Ha Kunde”.

He began by playing a character “Agatha” in 2014 on Instagram before he began to gain prominence. His amusing musical prowess has helped him create covers of hits songs around the globe. He has featured in several musical videos. He has over 470k followers on Instagram.

Popularly referred to as Mama Tobi in his skits, this comedian plays the role of a typical Nigerian mother in his skits and has over 268k followers on Instagram.

This comedian is a Lawyer, MC and an actor. He gained popularity, through his skits in which he puts on a white shirt and black tie hence portrays himself as a Lawyer. He has over 292k followers on Instagram and goes by the motto: You are not living if you’re not laughing”

Baba Adan is a thorn in the flesh to his son. Adan in his skits, his  signature look is an old Skool Agbada and a yellow cap and he has gained popularity on Instagram with over 244k followers.

This  “Queen Of the “Zanga” is an entertainer, comedian and entrepreneur. Her talent spans different fields in the industry. Asides from being a comedian she is also an actress and an event compere. She has over 714k Instagram followers.

His real name is Oluwatoyin Bayegun, he found fame on Instagram through posting videos of him preaching the gospel and prophesying in comical ways reminiscent of local prophets. He has over 7792k Instagram and has performed in many big shows in Nigeria.

He is a comedian, multitalented instrumentalist. He is popular for his videomix of fungy clips and rendition of top celebrity songs and a mix of Local African Flavour. He is an actor, Tv presenter, singer, MC and has over 520k followers on Instagram.

He is famous for his multiple roles in his skits, through his Instagram skits he has made millions online and through his movie  “Twyse and family: The movie, and has over 612k followers on Instagram.

This comedian became popular when he mispronounced what a female Hyenna is called Hereen, giving birth to the brand  “Hyenana”, He also went viral when he pranked the Lekki toll gate staff. He has 72.2k Instagram followers, He is an OAP, brand ambassador @gbam.ng.

The “Issokay” Master Ayokanmi Fakeye, he his known for the multiple roles he plays in his skits. His skits have inspired several songs including Aje Butter’s “Bad Gang, he also featured in the video alongside Falz The Bad Guy.

This beautiful comedian has over 385k Instagram followers, she became popular through her usage of the Ibadan accent in her hilarious skits. She does shout outs and advertising for big brands through her skits.

Clinton Egbuna refers to himself as “Medical Laugh Expert” He has over 384k followers on Instagram and has gained popularity through his funny videos.