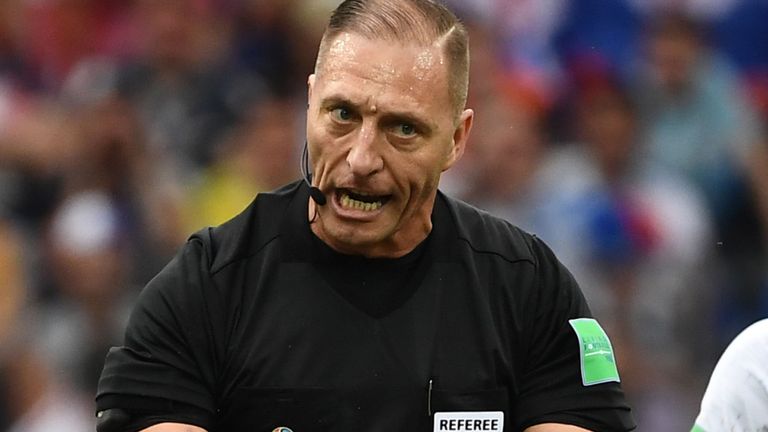 Argentinian referee, Nestor Pitana, with his assistants, Hernan Maidana and Juan Belatti, will officiate the final match of the 2018 FIFA World Cup, the World football governing body announced on Thursday.

The match, which is between France and Croatia, is billed for the Luzhniki Stadium in Moscow.

Pitana has already handled four matches at the ongoing Mundial, beginning with the opening game between Russia and Saudi Arabia as well as the Group F tie between Mexico and Sweden.

The 43-year-old Physical Education teacher also handled the Round of 16 encounters between Croatia and Denmark as well as the quarter-final fixture between Uruguay and France.

Pitana is the second Argentinian referee to participate in two World Cup championships after Norberto Coerezza, who oversaw two games in 1970 and one in 1978.

After Horacio Elizondo in 2006, he becomes the second Argentinian referee to officiate a World Cup Final.

Pitana, who has been an international referee since 2010, is one of South America’s most experienced referees and also has a playing experience at youth level.

Three games at the U-17 FIFA World Cup in 2013 preceded a call-up the following year for the World Cup in Brazil.

He was in charge of four fixtures, including France versus Germany in the quarter-finals.

In 2015, he was called up for his first, and so far only, Copa America, in addition to handling River Plate versus Huracan in the final match of the Supercopa Argentina.

Pitana returned to Brazil in 2016 for the Olympic Football Tournament, where he was the man in the middle for the semi-final between Germany and Nigeria.

In 2017 he took charge of the FIFA Confederations Cup semi-final fixture between Germany and Mexico.

Bjorn Kuipers of The Netherlands is the game’s Fourth Official, while his compatriot, Erwin Zeinstra, is the Reserve Assistant Referee (RAR).

Already, Alireza Faghani of Iran has been picked to handle the Belgium versus England fixture in the third-place match of Saturday in St. Petersburg.

His compatriots, Reza Sokhandan and Mohammadreza Mansouri will work with him as AR1 and AR2 respectively.

The Senegalese duo of Malang Diedhiou and Djibril Camara will serve as the Fourth Official and RAR respectively.

I Am Strongly Behind Ole Gunnar Solskjaer...