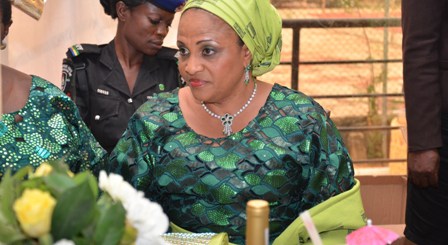 This is the big question on the lips of many people in Ibadan, especially within the political class, since the gist broke some weeks ago that Chief Mrs. Florence Ajimobi, the beautiful wife of Oyo State Governor, Senator Isiaq Abiola Ajimobi, might be contesting to go to the Upper Chamber of the country in her husband’s constituency, Oyo South, come 2019. Why not as you are likely to ask? There is absolutely noting wrong in this move if it is true at the end of the day, as Nigeria constitution allows it. Even though, she is a Lebanese, the fact that Florence Ajimobi was born and raised in Nigeria (Ibadan) and married to a Nigerian more than thirty years now qualifies her to vie for an elective office.

Though there has not been an official statement confirming or denying this from the first family in the state. But some say it is a kind of strategy for Mrs. Ajimobi to test grand politically. While some say it is the husband, that will go to the senate at the expiration of his second term in office come 2019.

The Day Tinubu Reaped What He sowed...