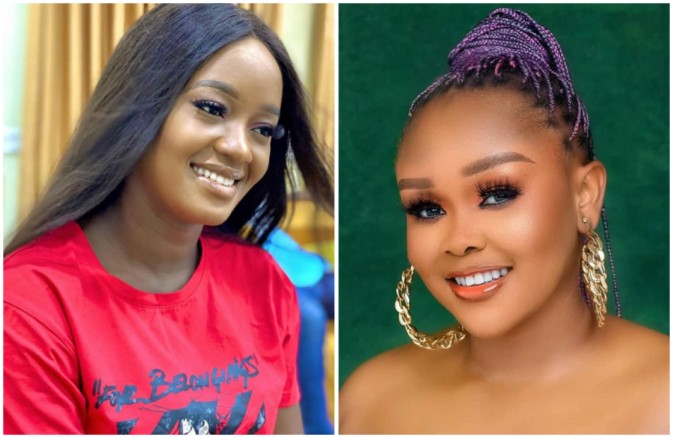 The movie industry is blessed with multi-talented movie stars who not only feature in movies but also interprete roles perfectly. And due to their talents and skills their fan base keeps increasing on daily basis.

Though some of these stars have spent few years in the industry but have already become household names most especially in the Eastern part of the country.

They also feature both in English and Igbo movies back to back.

A good number of them are equally based in the Eastern part of the country and they sometimes travel to other part of the country. And besides their skills they are equally blessed with beautiful looks which stands them out amongst their contemporaries. City People Senior Showbiz Reporter, BIODUN ALAO brings you 50 Igbo actresses currently dominating the movie scene.

Elma Mbadiwe, the very beautiful Elma is known for her work on African movie channel such as Rekindle, Rattle Snake, The Ahanna story amongst others.

She holds a B.Sc. in Mass Communication from the Redeemer’s University and Diploma in Acting from Royal Arts Academy.

Urenna Juliet is one of the most talented movie actresses in the industry. She started her movie career with her personal production. She has been featuring in movies back to back and that has made her more famous amongst her contemporaries in the industry.

Jojo Yovwe is another fantastic actress who is making waves in the movie industry. And she is popular for movie like The Fisher Man, Sign The Will, Area Scatter amongst others.

She is indeed blessed with good looks and brain.

The ever pretty Calista Okonkwo remains one of the most sought after movie actresses in the industry. She is very good at what she does and has created a niche for herserlf in the industry. And she features in movies back to back.

Abigail Nebechi is a talented actress. The curvy actress is one of the hottest star currently trending in the entertainment industry. A graduate of the Federal University of Technology, Uyo.

Sonia Ihuoma Uche is among the young and beautiful actresses making waves. She is the daughter of a veteran Nigerian actress, Uche Nancy is also the sister to multi-talented actress, Chinenye Nnebe.

Oluchi Nwabuzor is a multi-talented actress, who is popular for movies like “Losing Control”, If The Walls Could Speak, amongst others.

Juliet Ndudi is a beautiful actress who is one of the fast rising actress currently in the industry. She has featured in a good number of movies. She hails from Umuoji in Anambra State and has featured in movies such as House On Fire, Last Kidney, Sugar Toured Heart, Glory Of The King amongst others.

Chiagoziem Nwakanma popularly known as Chy Nwakanma is another beautiful multi-talented actress making waves in the industry. She is from Abia State and has featured in a good number of movies.

Chinenye Nnebe, she is an actress, model and television personality. She started her career as a kid actress. She is the daughter to Nollywood costumier and movie producer, Uche Nancy.

Chioma Chijioke Anosike is a talented actresses and producer married to movie director. She is popular for movies like Feast of War, Water Girl, Power Of A King and a host of others.

Chioma Okafor is a beautiful actress who hails from Idemili Local Government in Anambra State. She studied Business Administration at the Nnamdi Azikiwe University. She joined the industry professionally in 2018, where she starred in the legendary stage play “Nollywood Scoundrel”.

Chinenye Ubah, pretty actress, Chinenye is one of the most sought after actresses from the Eastern part of the country. She is known for her differetn roles which she interpretes so perfectly.

Chinenye Uyanna is a fast rising actress, model and television personality. She was born in Anambra State.

She is very beautiful, gifted, creative and talented in acting and interpretation of movies and fits into every role so perfectly.

Merenma Umeh is another exceptional multi-talented actress making waves in the industry. Besides being a beautiful actress, she is also a screenwriter.

Nwulegu Chinenye Emmanuella is fast-rising actress in the industry and has featured in a couple of movies.

Jenefer Paul, beautiful, highly talented Jennifer can interprete roles so perfectly and currently rated as one of the most sought after in the industry.

Genny Uzoma started acting in 2005 but took a 6 year break to work in a telecommunication company after youth service (NYSC) but later resigned and returned back to the movie scene in 2014. She was born and raised in Enugu State and has featured in lots of movies.

Sonia Ogene is a very beautiful and curvy actress currently making waves in the industry. She has equally featured in lots of movies alongside notable stars.

Pretty Chichi Eze is another talented actress making waves in the industry. She is blessed with brains and beauty as well.

Crystal Okoye is one of the finest actresses in the movie industry. Blessed with a shape to die for anyday.

She is one of the those pretty faces currently rocking the movie scene.

Julius Oluchi is a pretty movie actress who has featured in lots of movies. What many fans love about this hardworking actress is the way she interprete roles in movies.

Amarachi Igidimbah is a successful entrepreneur and an exceptional actress who makes it a point of duty to always interprete every role perfectly. She is sure very good at what she does.

What about the very beautiful Helena Duru, who besides being a fantastic actress, she is also a creative writer, economist and producer.

Tracy Edwin, this list can’t be complete without mentioning the very beautiful and talented, Tracy who is also among the rare of the moment in the industry.

What about Chioma Jessy Daniels. This fair skinned actress has been in the industry for a while and despite her long stay, she has been consistent and remain at the very top of her career.

Esther Okorie, the very pretty is one actress a lot of movie producer enjoys featuring in movies because of skills. She interprete roles passionately. Her beauty is also another quality that attracts many fans to her.

Also Jane Obi is another regular face you see in feature English and Igbo movies. Trust me this pretty talented actress knows how to dot the i’s and cross the t’s when it comes to interpreting roles.

Adaeze Eluke is an actress, model and lawyer. She hails from Oghe in Ezeagu Local Government area in Enugu State. She launched herself into the industry few years ago and has since featured in lots of movies.

She is very beautiful and exceptionally talented.

The ever pretty Adanma Luke is from the Nnewi area in Anambra State. She might not be a new face in the industry but has maintained the fame and remained at the very of her career. The same applies to Nazo Ekezie, she is also one actress that has kept the fire burning, dominating the top spot in her career. She is very beautiful and extremely talented and above all, blessed with a gorgeous body.