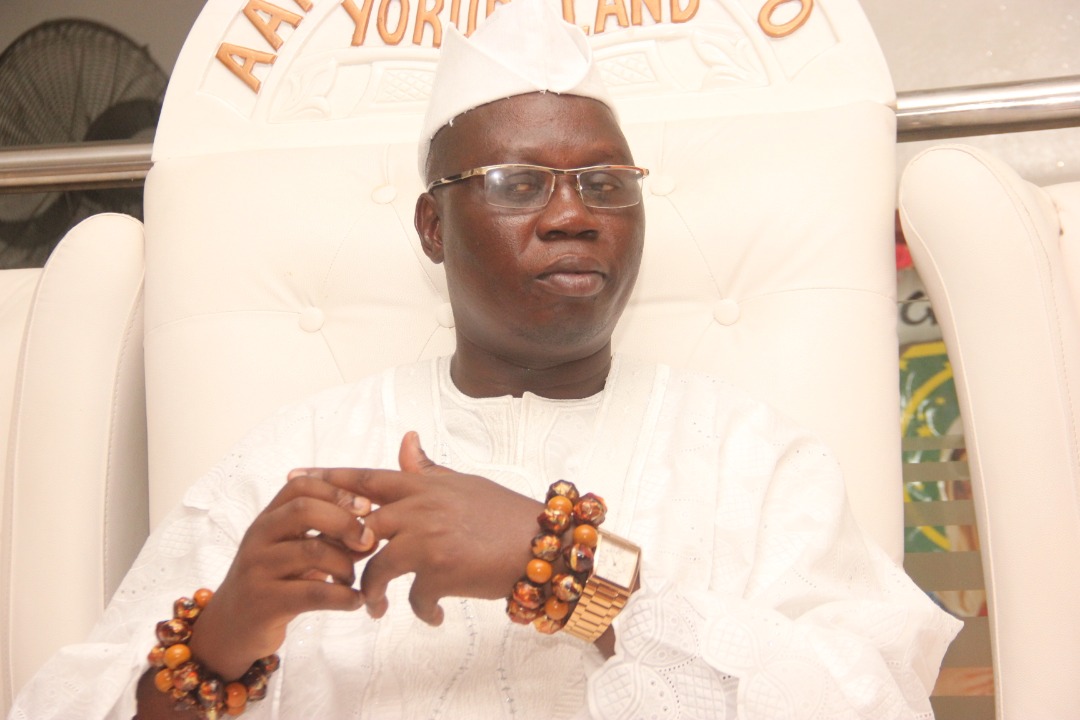 SETS UP COUNCIL OF ADVISER

As you read this, Aare Gani Adams, the Aare Ona Kakanfo of Yorubaland is in a happy mood. He is currently celebrating the 1st year anniversary of his installation as the Aare Onakakanfo of Yorubaland. It is a 5-day celebration which starts tomorrow Wednesday 9th January, 2019 with the launch and public presentation of 2 books on Aare Onakakanfo and another one, which is the collection of Yoruba proverbs.Venue is The Sheraton Hotels, Ikeja, Lagos. On Thursday, January 10th 2019, there will be a Final Match of the Ist Annual Aare Onakankanfo Football Competition, at the Legacy Football Field, National Stadium, Surulere, Lagos.

On Friday, January 11th 2019, there will be a Yoruba Quiz Competition , compilation and presentation of 1000 question and answers on Yoruba culture and tradition, at TCC Event Centre, Opposite Polaris Bank, Kudirat Abiola Way, Oregun, Ikeja, Lagos.

On Saturday, January 12th 2019, there will be the conferment of chieftaincy titles to prominent sons and daughters, at the 10 Degrees Event Centre, Billings Way, Oregun, Ikeja, Lagos.

On Sunday, January 13th 2019, there will be the Grand Finale and a Grand Reception for well wishers, including family and friends at the Grandeur Event Centre, Kudirat Abiola Way, Oregun, Ikeja.

Otunba Gani Adams told City People last Monday that the last 1 year has been very challenging for him as his schedule has become even busier than before. The Mangement of City People Magazine had visited the Aare at his Lagos home to celebrate with him and he took time out to share with City People how the last one year had been. He granted City People his 1st major interview since he ascended the Aare Ona Kakanfo throne. The team led by Publisher, Seye Kehinde included Francis Owojori, the DMD of City People, Isaac Abimbade, the head of Real Estate desk, and Jimmy Abdulrasheed, City People’s Senior Photographer.

He explained that because of the enormity of the task before him and the frequency with which he gets invited to events and functions, he has decided to appoint a Council of Advisers who he can send to represent him anywhere, if need be. They will be his chiefs.

We have zoned those chieftaincy to 8 Yoruba speaking states. We have 4 from Lagos. We have 3-4 from Ogun. Kogi has the highest number of 5. Ondo State is 2, Ekiti 2, Osun 2, Oyo is 2 and Kwara State is 1. So we made sure we have representatives drawn fron the 8 states of Yorubaland. So if anything happens in any of those states, you don’t have to put pressure on me; I would just send the Chief closest to that community to investigate what is happening there and appropriate reactions can follow it because I get about 50 invitations every week now. And I can’t humanly attend all.

And you know we (Yorubas) when we invite you to any occasion and you ignore us, they will tag you as being proud and arrogant.

So, the issue of representation is very important to me. All these Chiefs, they are the ones to represent me.

So, at our one year anniversary, I want to start differentiating OPC and every group I am running, from the institution of Aare Onakakanfo. Before this installation, I have been sending the Publicity Secretary of OPC to represent me at most events. Before now I also used to send my Special Adviser on Events and Strategy but when he left, there was a vacuum. So I had to bring in the Publicity Secretary to be doing that. Now, I am giving the Publicity Secretary a title which is Asoju Aare. So when he goes out there, he won’t present himself as a Publicity Secretary of OPC but as Asoju Aare. We have Iyalaje Aare, which is Iyaloja of Apongbon. We have Yeye Meto, the wife of Ba’meto.  We have Ba’Selu, which is the former Honourable Speaker, Bamidele in Ekiti. Otunba Kole Omololu is the Odofin. Barrister Kayode Ajulo will be conferred Mayegun. We also have Ba’Mofin, his name is Barrister Kehinde Oluwole (My Lawyer). We also have Ba’Royin. We took one of you because we can’t play with media. We took Sola Oshunkeye. We looked at their reputation and integrity before we chose them. I made sure that only those who are more sound than me were selected into the council because when we discuss we would have a robust discussion. We also have Parakoyi, which is Prof. Kolawole Raheem; he is an erudite scholar. We also have Otun, he is doing well in the Oil sector.

We also have Ajibare from Kogi State. We also have Osi, the former Akogun (Gani Balogun), is now the Osi, while Kamoru Lamina is the Borokini Aare Onakakanfo.

From time immemorial the Aare Onakakanfo had 16 traditional chiefs. They had many other honourary chiefs. They also had key chiefs they call Eso. They were 71 in 41 cardinal points of Yorubaland.

That was when the population of Yoruba is not up to 2 millions”.