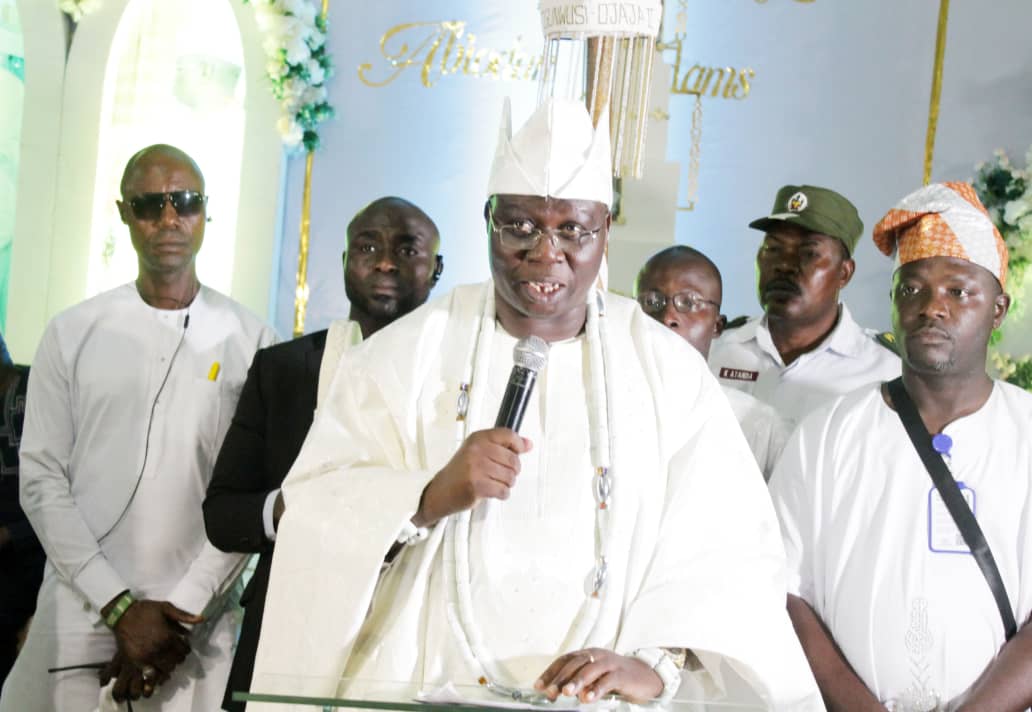 Just a couple of days ago, precisely on the 8th of May, 2022, the Generalissimo of Yoruba land, the Aare OnaKakanfo himself, Iba Gani Abiodun Ige Adams, celebrated his 52nd birthday with pomp. It was indeed a celebration befitting of a man of the Aare’s standing as he pulled out all the stops to make sure he had for himself a memorable event. The event was held at the prestigious Harbour Point Event Centre in Victoria Island, and as it turned out, the venue was just about the appropriate place to accommodate the enormous amount of guests that attended the occasion to felicitate with one of Yoruba land and indeed black Africa’s most illustrious sons. When tomorrow comes and the complete story of the June 12 struggle and agitation for the enthronement of democracy in Nigeria is being told, Iba Gani Adams’ name will be written in gold. He very nearly put his life on the line for the actualization of democracy in the country. It was this struggle that led to the birth of Oodua People’s Congress (OPC).

Expectedly, traditional rulers, royal fathers, stakeholders of the traditional institutions, all thronged the venue enmasse to rejoice with one of their own, and a very significant one at that. The event had all the trappings of royalty one would expect to find at such grand occasion. Indeed, it underlined clearly, the invaluable contributions of the celebrant, Iba Gani Abiodun Ige Adams to the propagation of the Yoruba culture and Heritage.

City People’s Senior Editor, WALE LAWAL (08037209290) and photo journalist, SUNDAY ADERIYE, were both at the event to put together a comprehensive report of all that went down at the event which had the legendary Chief Commander Ebenezer Obey and his Inter Reformers band on the band stand.

One of the biggest headaches of decorators is when they are faced with the responsibility of transforming a massive auditorium like that of Harbour Point where Aare Ona Kakanfo, Iba Gani Abiodun Ige Adams had his birthday celebration. But it must be said that the decorators did a fabulous job. They brought the hall alive with the exquisite arrangement of the tables, the beautiful table covers, the alluring silky drapes that adorned the hall and the well placed enthralling lightings. At the entrance of the auditorium, lovely pictures of the birthday boy and his gorgeous looking better half and mother of his adorable children, Ayinba Mojisola Adams, were conspicuously on display.

Usually, for celebrants, the one big question on their minds before the D-day has often been, what do I wear for my party? How grand and unique can I look? How do I stand out from the rest of the crowd as the celebrant of the day? But for Iba Gani Abiodun Ige Adams, there was no such difficulty. He is royalty, and royalty does not wear the regular dresses people wear, royalty wear only what royalty wear. The birthday boy was looking resplendent in his full white and light shade of shimmering gold agbada made of exquisite fabric. His tall frame enabled the outfit sit perfectly on his athletic figure. He also had on his traditional royal cap. And if you know Iba Gani Adamsd very well, then you must’ve noticed his love for exotic shoes, most of which he buys during his trips outside his country. He was wearing one of such last Sunday and it matched perfectly his all white outfit.

You just have to give it to the ever gorgeous wife of the birthday boy, Ayinba Mojisola Adams, she has never been one to shy away from standing out from the crowd whenever she steps out for events. This pretty looking mother of five, can you believe it (she has a set of twins) has always loved to dress well and look good. It came as no surprise to see her looking magnificent beside her husband for his birthday. She was also stunning in her simple but elegant looking Iro and buba. She used minimal but exquisite jewelry which underscored the fact that she is a woman of great taste when it comes to fashion.

No better word could aptly describe the array of guests other than the words deployed above – a galaxy of Royal fathers! Nearly every table had some semblance of royalty on it. And even though there was actually no colour code for the event, the heavy presence of traditional rulers and royal fathers who were in predominantly white or bright coloured regalias very nearly gave the impression the colour code for the event was white. But that was not the case. This is what usually happens when you have a large assemblage of royal fathers in one place. The Zaki of Arigidi Akoko, Oba Yisa Olanipekun, the traditional ruler of Arigidi Akoko where the Aare OnaKakanfo comes from, led the pack of royal fathers at the ceremony. His presence and that of the other traditional rulers really excited the celebrant.

Many believed the event would’ve been even ‘grander’ than it was if the late Alaafin of Oyo, Oba Lamidi Adeyemi, had been alive. You will recall it was the late Alaafin who installed Iba Gani Adams as the Aare Onakakanfo of Yoruba land. Not just that, the two were very close, they had a father and son relationship long before Iba Gani Adams was installed the Generalissimo of Yoruba land. Even the Aare Onakakanfo himself admitted that much in his speech and revealed that the late Alaafin would’ve been Father of the day at the occasion.

Many were obviously wowed by the impressive birthday speech given by the birthday boy himself, the Aare Onakakanfo of Yoruba land, Iba Gani Abiodun Ige Adams. When he was called out to make his speech, many must’ve expected a very brief and hurriedly done speech. But not the brilliant and highly articulate Iba Gani Adams. For several minutes on end, without reading from a prepared speech, the birthday boy dazzled his guests with his articulation, fluency and mastery of the English language. For someone who was once thought of as nothing but a rebel, street fighter and hoodlum in his younger days, it was so heartwarming to see him stand before intellectuals gathered at the event and deliver such powerful speech, taking us back into his early days of the struggle and the storms he has had to weather to get to where he is today. Without a shred of doubt, Aare is an inspiration to many young Nigerian youths.

TWO PERFECT MCs FOR THE OCCASION

Looking at the caliber of guests at the 52nd birthday celebration of Iba Gani Adams, many must’ve wondered who the MC of the occasion would be. He had to be somebody knowledgeable enough in the Yoruba tradition and culture and sufficiently suitable to speak to Royal fathers without making costly blunders. And for Iba Gani Adams, he must’ve found the duo of popular broadcaster and master of ceremony, Ifankaleluya, and comedian, MC Murphy, just perfect for the job. And to be honest, they did not disappoint. They both brought their rich knowledge of the Yoruba culture and tradition to bear on the night.

Give it to Chief Commander Ebenezer Obey (MFR), his performance was scintillating. Apart from the fact that baba, who only just celebrated his 80th birthday few weeks ago sat down all through his performance, nothing has changed in terms of his vocal delivery and overall performance of the band. For an 80 year old, his voice was still strong and melodious, just as it was in his younger days. Dressed in a simple cream coloured kaftan with a gold plaited black suede pair of shoes, Baba Commander was looking too good for 80!

Ayinba Mojisola Adams and other distinguished guests joined the birthday boy to cut his birthday cake. The birthday cake itself was an imposing figure, fit enough to match the imposing height of Iba Gani Adams. And it must be said that the Aare Onakakanfo and his lovely wife made a perfect match. Her enchanting smile lit up the gathering as several other guests who didn’t wait to be called upon joined them on stage for the cutting of the birthday cake.

JIMI AGBAJE IN THE HOUSE

Former Lagos governorship aspirant and member of the People’s Democratic Party, (PDP) Mr. Jimi Agbaje, was also in attendance. He came in dressed in simple deep cream coloured native outfit and mingled well with the other VIP guests. He enjoyed himself at the party as he was seen laughing and throwing banters with other guests.

IYA LAJE OODUA IN THE BUILDING

Beautiful and charismatic business woman and philanthropist, Princess Dr. Toyin Kolade, the Iya laje Oodua, was also in attendance. Although she came in hours after the party had begun but she made quite an entry nonetheless. Sparkling in her traditional all white outfit and with her pretty face and glowing skin attracting admiration from both male and female guests, she drew prompt attention from everyone who saw her. She was greeted respectfully while others simply gazed at the charming looking lady of substance. And of course, in her usual manner, she had a warm, lovely smile for everyone who acknowledged her. Ever since she was conferred with the Iya laje Oodua title, this accomplished woman has stepped up her game big time, making social appearances at high octane events and spending a lot more of her resources empowering the needy in the society.

Commander Ebenezer Obey’s son, Tolu, who is also a musician like his father, took over from Commander much later in the course of the event. Tolu sounds and sings exactly like his father. Often times, when he is on stage, if you were hearing his voice but did not look in the direction of the stage, you would think it was Chief Commander himself that was on stage. That is how much they sound alike. And it’s so unbelievable to see how good Tolu is too. But then, what more should one expect from the son of the Commander himself. At Iba Gani’s birthday, many didn’t realize Baba Commander himself had left the stage for his son, Tolu because people could hardly tell the difference in their voice.

There were several professional hands involved in the packaging of the extremely successful event. The classy birthday party was packaged by the dynamic and highly experienced outfit, House of Root Entertainment and Event Management. The CEO of House of Root Entertainment, extremely influential events and entertainment guru popularly known as Akeem Babs, did a fantastic job putting the event together. He was also on ground to ensure all went well. He got thumbs up from everyone present. Ambassador Muyiwa Osinaike, an event guru in his own right, was also instrumental to the success of the event. He and other planning committee members gave everything to make sure the event was nothing short of the grand spectacle that it was.

Why The Super-Rich Are Crazy About ORANGE Island