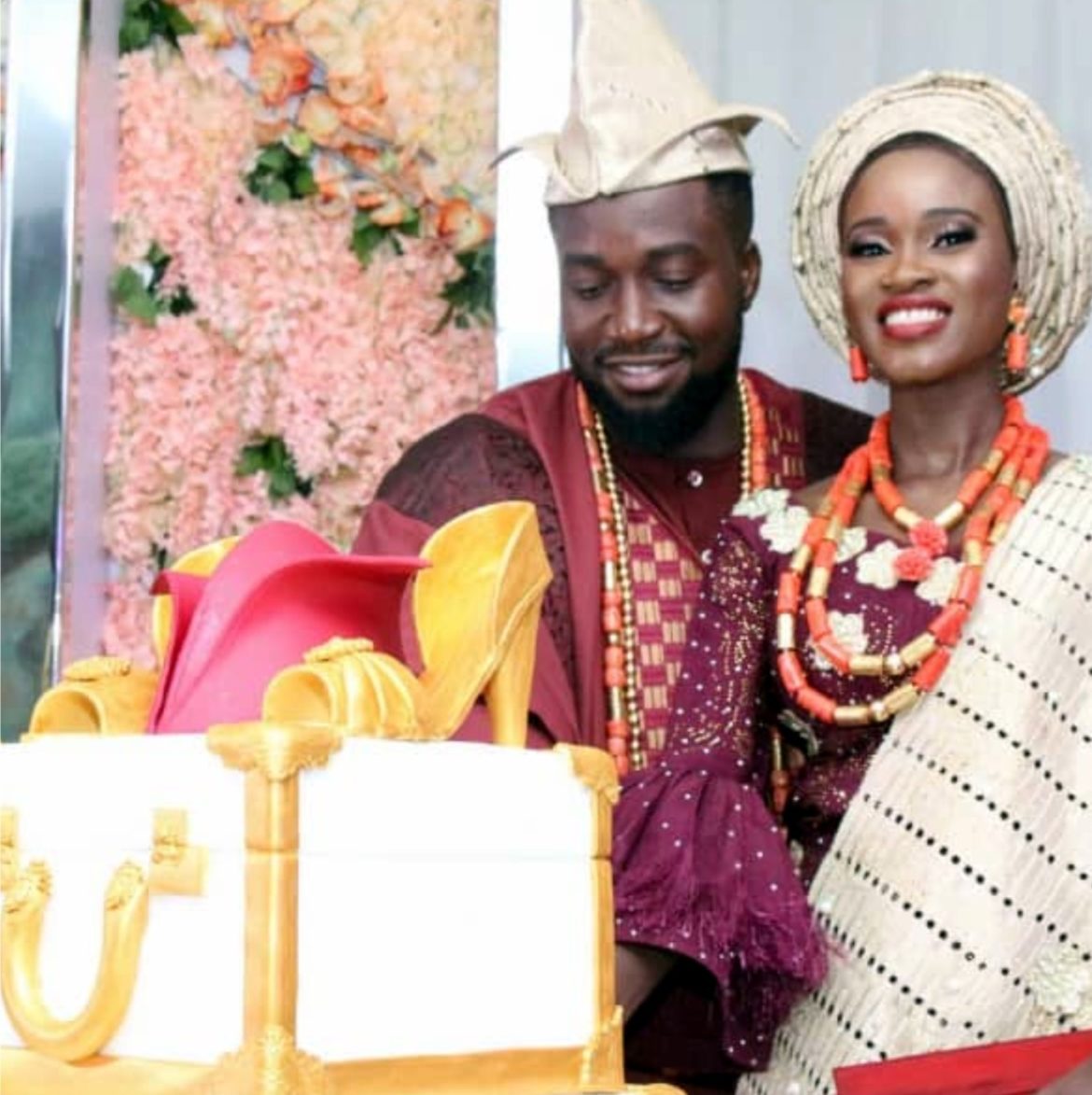 •Blow-By-Blow Accounts Of The 2 Day Party In ABUJA

Friday 26th April, 26th and Saturday, April 2018, will remain unforgettable in the minds of many Abuja celebrity women, as handsome Tunji Bakare, the brain behind an upscale celebrity fashion brand, TJbespokebakare, who is the son of popular Abuja celebrity woman, Otunba Christine Ademodi and Alhaji Tajudeen Bakare, wedded in grand style. The event, which was rich in Yoruba culture and heritage took place at the spacious A-Class Event Centre, Wuse 2-Abuja and it paraded many Abuja big men and women of substance for 2-days, as Tunji signed the dotted lines with his pretty bride, Oluwayinka Owolabi. City People Assistant Society Editor, ABIOLA ORISILE, was in Abuja to serve you hot gists from the event.

Right from when Otunba Christiana Ademodi, a retired top spot at the Federal Airport Authority of Nigeria sent out an invitation that her son, Tunji Bakare, would be getting married to his long-time heartthrob, Oluwayinka Owolabi, in April, many Abuja celebrities didn’t only keep the date in their calendar,

they also bought the 2days Aso-ebi picked by Otunba Ademodi.  Did you ask why? It was because Otunba Christine is one of Abuja’s powerful celebrity women, who is well loved by many. The Ceo of YELIN Group of Company and Mobak link catering services was bubbling with joy seeing her friends and family showing her love. Looking many years younger than her age, pretty Otunba Christine was a cynosure of all eyes when she danced into the hall in Emerald Handcut exclusive lace, matched with emerald headgear. Her white luxury bead with 18carat gold-filled stopper did the talking as she danced in at the engagement. What about her looks at the Saturday wedding? Otunba Ademodi looked like a pack of diamonds in a cream coloured lace matched with wine colour embellished headgear.  Many of her guests couldn’t help but admire her as she was ushered into the hall by Ondo cultural group. Don’t forget that Otunba Christine is from Leyo Ruling House of Ondo Kingdom and her father was foremost Pa Ademodi, the multi-millionaire  Timber businessman.

If there was anyone who got teary at the wedding aside Otunba Christine Ademodi, it was the bride‘s mum, Mrs Owolabi. The ebony pretty woman, who shares a very strong bond with her daughter, couldn‘t curtail her tears of joy as her daughter signed the dotted lines with her longtime beau. Mummy Owolabi was spotted in onion colour lace for the engagement, while she rocked same cream lace with Otunba Ademodi at the Saturday grand reception. Though the bride’s father was late, but the younger brother of the bride stood in as the bride’s father.

We give it to Otunba Christine Ademodi as she made many Abuja Apc and PDP politicians party under the same roof. The event which would forever linger in the minds of many who attended not just because of how classy it was, but because of the presence of society women who put their political differences aside to party at the wedding. Otunba Ademodi’s position as a top retiree of F.A.N made many top politicians come out in numbers and many were seen chatting freely and smiling without minding their different political leanings. Some were even seated at the same table for the 2days that the event lasted.  A good example was Hajia Titi Atiku, the wife of a former Vice President, Atiku Abubakar. She sat at the same table with Hajia Salamotu Baiwa Umar-Eluma, the National Woman Leader of APC.  She was at the party with Eze Uju, Tomilola Kasim, Ngozi Nandi, Hajiah Lantana, Amaka Eluma, Bola Fahwemi, Anne Idu, Esther Adejobi, Rosemary Andu, Hajia Rakiya, Hajia Kadijah Mamman, Chinyere Agu, Hajia Matahima, Hajia Mimi Nasim, Tessy Chukwuedo, Jamila Muhammed to mention few.

Have you noticed one pretty woman who always attends Abuja society parties with Mrs Atiku Abubakar? Well, that is Mrs Funmilayo Abosede Adeboye, the best friend of Mrs Atiku Abubakar and they have been friends for over 30years and still counting. They were both at Chief Ademodi’s son’s wedding for the two days, chatting and gisting for hours. City People investigation revealed that they grew up together in the North and have kept their friendship till date.

Abuja celebrity designer of note, Erelu Tola Osifeso, the pretty wife of Otunba Lekan Osifeso, flew into Abuja a day before the wedding. The brain behind Abuja popular fashion brand whose flawless skin compliments her Emerald Green HoH was a cynosure of all eyes as she enjoyed the party with her best friend, Dr Mrs Vicky Haastrup, the Ceo of ENL Consortium, a bonded Terminal in Nigeria.

Sighting the groom, Tunji Bakare and his ebony bride, Yinka Owolabi, on their big day, one could mistake them for Siamese twins. The chemistry between them made it obvious that they share a strong bond. The handsome groom couldn’t take his eyes off Yinka for a second. The bride, Yinka, a biochemist was a cynosure of all eyes when she first made her appearance at the Engagement in Burgundy aso-oke, while her face was beatified by “Makeupbyshakara“.  Of course, the groom transformed his aso-oke himself as he runs Abuja popular Fashion brand. What about their white wedding look? The bride dazzled like a Princess when she stepped out in a white flowing Cinderella dress from “Msmakor“, an Abuja bespoke bridal gown fashion brand, in Wuse2 Abuja. Her hair was well wrapped by “Defehairsignauture“, while she signed her dotted lines at Pastor Biodun Fatoyimbo’s, Church, COZA, Gussepe Church in Abuja. The handsome groom, who intermittently beamed with smiles dazzled many when he stepped out in a gold coloured Jacket, which was also one of his designs with a black shoe. They publicly displayed love to each other at the reception.

Handsome and slim looking Alhaji Tajudeen Bakare was so elated seeing his son getting married. This was obvious in the way he danced at the 2-days wedding. He was with his elder brother, Pharm Chief Olayiwola Bakare and prominent members of the Bakare family from Abeokuta. Mrs  Amudalt Sule, Alhaji Jubril Bakare and other family members from Nguru and Lagos came with him to seek the hands of Yinka in marriage for his son, Olatunji.

AND THE ADEMODI SIBBLINGS FLY IN FROM ABROAD FOR THE WEDDING

Many of the Ademodi families are super rich Nigerians, who are doing so well in their chosen careers. Many of them made it a day to show love to one of their own as Tunji and Yinka wedded in Abuja. Among those who made the event were Olasunbo Olatunji, Stella Adeshuko, Mama Mamie, Bisi Osunaiya, Toby Odunaya, Tolu Adedeji, Anike Odunaiya, Mama Kofo(Ecowa), Tj Motors (United State) among many others.

MANY GUESTS FLY IN FROM LAGOS

It was an array of many guests, who left Lagos for Abuja for   The Ademodis. Many of them made the 2days wedding rocking the special aso-ebi of lemon and gold. Among those sighted were: Mrs Aniol Fadayomi and her daughters, Prof Dr Theo Fadayomi, Mrs Olarewanju Olaniyi, Mrs Bolanle Akinsanmi, Mr Ife Onaiyi, Hajia Mero Saleh, Remmys Corner Friends.

Many who hadn’t seen Senator Sade Bent pray before were marvelled at her fervent praying at the Ademodis wedding in Abuja. A former Abuja Lawmaker who was beckoned by Hajia Titi Atiku to pray for the couple took many by surprise when she prayed for the couple at the reception with Hajia Salamotu, Mrs Titi Atiku, Senator Fadahunsi, Mrs Vicky Haastrup for the success of the marriage. She dazzled in a classy simple gown that complemented her figure.