Actress, NKECHI BLESSING, Opens Up On Her Late Mum 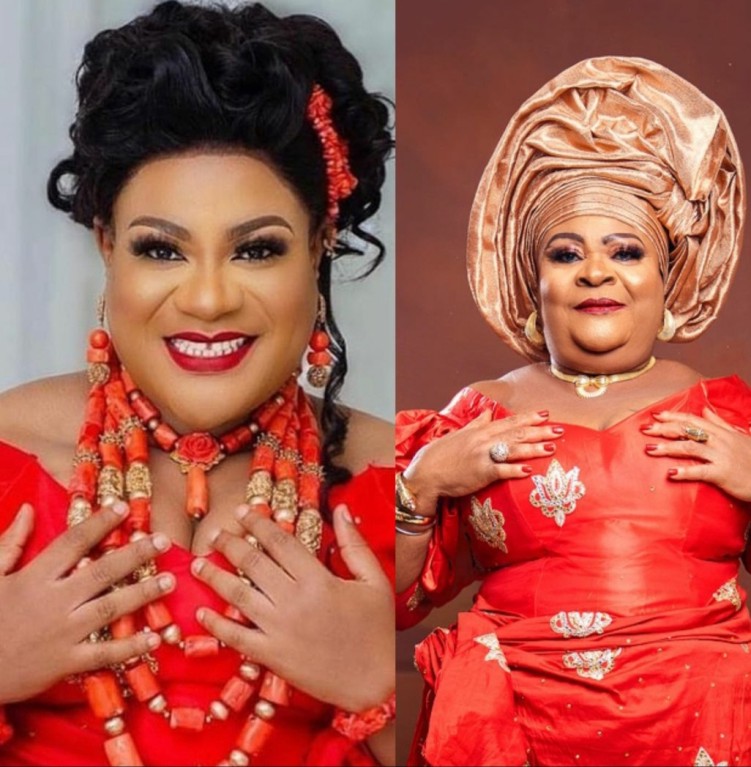 •Reveals Shocking Things About Her

Star actress, Nkechi Blessing, is one actress many tag controversial, but the fact still remains that, she is among the wave-making actresses in the industry and has become a household name.

She is very beautiful and outspoken. Another unique thing about Nkechi Blessing is that she doesn’t joke with her family. She also said in one of her interviews that before she impresses people outside or on social media, she would have taken good care of the homefront.

Unlike many of her colleagues in the industry, she maintains a very close relationship with members of her family, always making them a priority. And despite being married, her mother still lived in the same house with her until her death.

She used every opportunity to surprise her mother and siblings when the need arose most especially on their special days.

It was also revealed that she shared a very special relationship with her mother whom she regarded her rock and backbone. She once said, she admitted that losing her mother was the only thing that could make her cry and sad, not knowing that the woman was actually going to die very soon.

The actress also took to her page a few days later to pay tribute to her late mum. According to her.

“My greatest fear, mummy you shouldn’t have hmmm. You know if the doctors asked for money to keep you alive, I would have begged the world to help me save you. “But you left in a flash, your only complain was stomach ache… And that’s the last I heard of you, I went to bed thinking I would wake up from this dream, but it’s, indeed, a reality that you left me 5 days to your birthday Afianma you were a warrior.

“You had me at your back and said Nkechi you are unstoppable, now that you have left me how do I face the world? Everyone around me knows I lived all my life for you, I receive insults, abuse and embarrassment on social media just to make sure you do not beg for food, I am fulfilled, knowing you are in a better place.

Just a few days before her death, Mama had her birthday shoot with her children, so happy and full of life, and the beautiful photographs flooded the internet, but she died three days later after the photoshoot.

For many who don’t know, Mama Nkechi before her death. She was a very hardworking woman, who vowed to walk extra miles to make sure, her children become successful in life.

She took care of her family, even before her husband’s death. She was very famous at Pere Junction, Abule Egba, Lagos, where she owned a beer parlour. She instilled discipline, hard work and a no-nonsense attitude in her children, all these qualities are very visible in Nkechi Blessing, which made many tag her controversial.

It was like a premonition, as Nkechi Blessing equally granted Chude Jideonwo an interview a few days before her mother’s death, where she talked extensively about her late mum and other aspects of her life.

During the interview, she stated clearly what her biggest fear in life is.

I am 32 years old and married, but still living with my mother. It’s still because of her, I have not relocated to join my husband, I am very close to my mother, never living her side. She has been through a lot. She single-handedly took care of us. Even before I lost my dad in 2014, she had been a father and a mother, and that is why I celebrated her on father’s day.

I pray God bless me, so I can make her very happy and comfortable till the rest of her life.

I am this person, who prefers or likes to impress the homefront before impressing people outside, before I give you 1 million, I would have given my mum 5 million naira.

I can not use fame to feed my family, take away the fame and give me money. I can’t be a broke celebrity, I want to be able to pinpoint that oh, you see that car, I bought it from acting. You see the English fold, they are, indeed, making huge money, all the things you see them buy are from their hard-earned-money. You see people come out and say oh, are they really making these money from acting? Trust me, they are. Take for example, Zubby Micheals is the highest paid actor in Asaba, and people will say, is it not Asaba movie? We have very rich and influential men who invest heavily in these movies. It is not like the Yoruba industry, where anybody can just walk in and produce movies. I can tell you a lot of big stars in the English industry that have never produced before and they are cashing out. The people producing these English movies are not actors but investors and they pay well, and that is why you see the English stars go extra miles to interprete their roles so perfectly.

When asked what made her lend her voice to the rape issue, which led to her ban in the Yoruba movie industry, this is what she said: “I would not say I was once a rape victim but I was close to it.

When I was 16 going to 17, I had this cousin and I used to tell her I was a virgin, she said I was lying, because I was very loud and dance a lot. They even called me Makosa back then, when my mum had a beer parlour, but she was very strict with her kids and couldn’t see them mess around. Till now, my mum still lives with me until when I finally relocate to join my husband. I really need to make her extremely comfortable before leaving, not leaving her stranded. So my cousin invited me out to meet with her boyfriend and I was cool with it, and everything was looking like she wanted to set me up with her boyfriend, just to confirm if I was a virgin or not. But the fact that I was really exposed, which not necessarily mean, I was spoilt. She said she was coming and left, I was wondering what was happening, then it dawned on me, that it was about what I told her and she doubted me. At that particular point, I was really scared and needed to do something. I didn’t understand where the spirit and power came from, I just stood up and said I was going and the guy stood up immediately and held me down, then I said Uncle, do you want to rape me, I think that statement I made, made him confuse at that point. So, that fear and imagination that it actually almost happened made me conclude, people like that should be killed immediately they are caught.

I got lots of messages from rape victims when I posted these things, you will feel the anger and pains from the victims that someone forcefully raped. So, I guess, it was the flashback of my experience and putting that little girl in my shoes, which Baba Ijesha started molesting at age 7 really got me angry.

No person will hear such stories and be comfortable except the person is a child molester too.

When I was ranting, nobody came out to say anything, not until Mr. Latin Tampan President came out and said he couldn’t do anything because Baba Ijesha was not a member of Tampan and people were like oh oh, no wonder you people kept quiet.

But let me tell you the truth why most of these people kept quiet? If one of them comes outside to talk, all their victims will call them out, that is why everybody is quiet because, in one way or the other, they are all guilty of this thing. It happens in the industry where producers say, if you don’t sleep with me, you won’t get this role, yes it is happening in the industry, that is it.

So you suspending me from your industry that is even looking for a way to go is like helping me. What they did was pure blacklisting. They had the same issue with Yomi Fabiyi, and they sent a letter of invitation to him, they didn’t go outright to suspend him so what stops them from sending a letter to me too and hear from me, so I can apologise.

When asked why she often fights on social media? She had this to say “You can’t give out what you can’t take, you can’t expect to insult me and I would just ignore you. Let me shock you, I and my man don’t follow each other on Instagram, because of my person, we might have issue on Whatsapp where we talk every day and I will unfollow him on Instagram. And blogs will carry it, and one break up rumour in your relationship will lead to several other break up rumours.

People don’t understand these things. Don’t let your relationship be about the grams you can show the happy moments, but sad moments, keep it and keep going. By the time, you give these bloggers a clue you are having issues in your relationship and they carry it, and anything from Nkechi is like a wildfire, it goes everywhere, I don’t do these things to get attention, they just happen, so, I am a public figure with a private lifestyle.

I keep lots of things to myself, which I don’t want to let out.

What about your issue with Bobrisky, it’s like you participated in that drama? Bobrisky wanted a fight since 2019, but I was avoiding him with all the strength in me because when I consider someone my friend, I won’t come on social media to bring that person down, I will lose lots of other friends.

The statement of Davido’s car not coming with nylon, I just said it, then Instablog tagged it with my colleagues and most of them had issues with me right now because of that.

If I have issues, Father Lord please solve it, instead of going to my online in-laws to explain, they don’t care. When the Tampan issue started, my mum never wanted me to beg anybody, she already handed everything over to God.

People always have issues with me and my looks, forgetting the fact that I didn’t create myself, so I will flaunt my bum bum with all sincerity.

I do my things and I am happy, like I got married and nobody knows about it. I am indeed very happy with my life and even catching cruise.