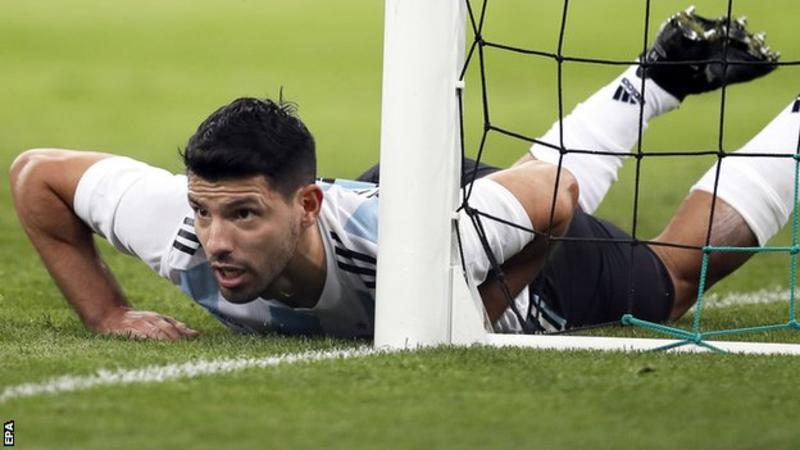 Sergio Aguero was taken to hospital after fainting in the dressing room at half-time in Argentina’s 4-2 defeat by Nigeria in Krasnodar, Russia.

The Manchester City striker had scored to put his side 2-0 up in the first half, but Arsenal’s Alex Iwobi found the net twice as Nigeria came back.

The Argentina FA said the 29-year-old had been taken to hospital to “carry out routine studies as a precaution”.

They later confirmed that Aguero had been discharged from hospital.

“He is already in the hotel along with the rest of the team,” they tweeted.

After the match, Argentina manager Jorge Sampaoli said Aguero had “got dizzy and had to leave”.

In a statement, City said he had been cleared by doctors to return to Manchester as planned “after suffering a dizzy spell” during the match.

“Sergio never lost consciousness, and was taken to hospital for precautionary medical checks,” the club said. “He will be assessed by the club’s medical team ahead of this weekend’s Premier League trip to Leicester City.”

Aguero, who became City’s all-time leading goalscorer earlier this month, had recently returned to action after he suffered a rib injury in a car crash in Amsterdam in September. He was injured when a taxi he was travelling in after attending a concert crashed into a lamp post.

In Wednesday’s international friendly, Leicester’s Kelechi Iheanacho netted with a free-kick and Brian Idowu was also on the scoresheet for the Super Eagles, who had fallen behind to strikes from Aguero and Ever Banega.