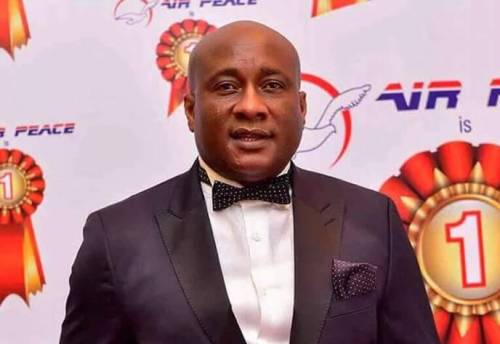 Founder, Chairman and Chief Executive Officer of Air Peace, Allen Onyema, has been charged with bank fraud and money laundering for moving over $20m from Nigeria through United States bank accounts in a scheme involving false documents based on the purchase of aeroplanes.

Also indicted in the fraud is Air Peace’s Chief of Administration and Finance, Ejiroghene Eghagha, who is accused of committing aggravated identity theft in connection with the scheme.

In a statement by the US Attorney’s Office, Northern District of Georgia, on Friday, the airline’s founder was accused of using his status to carry out the fraud.

“We will diligently protect the integrity of our banking system from being corrupted by criminals even when they disguise themselves in a cloak of international business,” he added.

Commenting on the development, the statement quoted Robert J. Murphy, Special Agent in Charge of the DEA Atlanta Field Division, as saying, “Allen Onyema’s status as a wealthy businessman turned out to be a fraud.

“He corrupted the US banking system but his trail of deceit and trickery came to a skidding halt.

“DEA would like to thank the many law enforcement partners and the subsequent prosecution by the US Attorney’s Office who aided in making this investigation a success.”

Also speaking on the issue, acting Special Agent in Charge Robert Hammer, who oversees HSI operations in Georgia and Alabama, said, “Onyema setup various innocent-sounding multi-million dollar asset purchases which were nothing more than alleged fronts for his scam.

“I’m proud to be part of a team of law enforcement agencies that come together to identify and attack criminals that attempt to profit from the exploitation of our nation’s financial systems.”

According to the statement, Onyema, starting from 2010, began travelling frequently to Atlanta, where he opened several personal and business bank accounts.

Air Peace CEO Accused of Money Laundering In The US was last modified: November 23rd, 2019 by Damilare Salami