Oyo Global Forum has released a statement in reaction to the advertorial placed on Page 29 of the Nigerian Tribune edition of Monday, June 5, 2017, appearing to praise Oyo State Governor Abiola Ajimobi’s six-year stewardship. The group has presented facts and evidence to refute the acclaimed developmental scorecard for the Governor, disclaiming the governor’s performance as below expectation.
Read full release below

Oyo Global Forum observes with consternation that a certain advertorial placed on Page 29 of the Nigerian Tribune edition of Monday, June 5, 2017, appearing to praise Oyo State Governor Abiola Ajimobi’s six-year stewardship, is making the rounds in Oyo state. This advertorial, which bears the letterhead and signature of His Royal Majesty, Oba Lamidi Adeyemi, the Alaafin of Oyo, purports to praise Governor Ajimobi as a high-achieving, “excellent” chief executive in Oyo State. 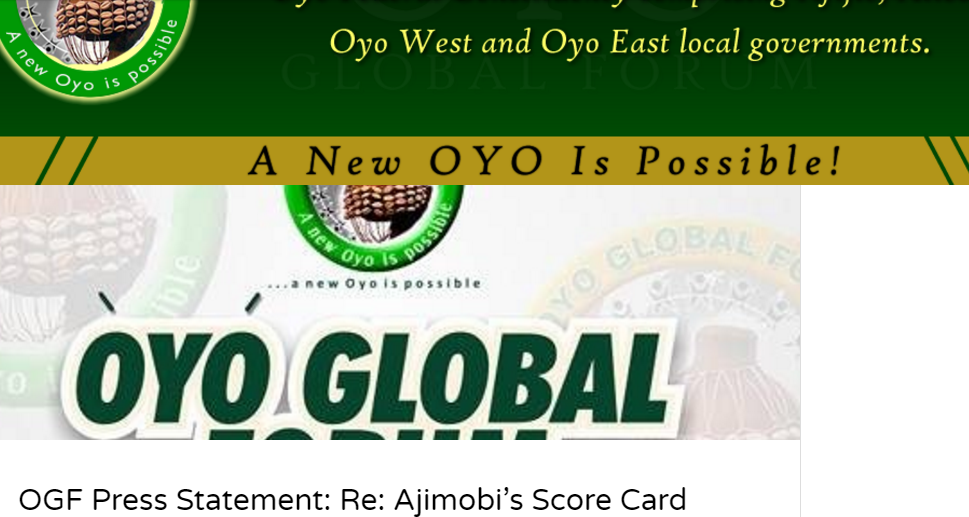 This unfortunate advertorial is a slap in the face of long-suffering sons and daughters of Oyo federal constituency, who have endured untold hardships arising from misgovernance and mismanagement of the state’s resources under the leadership of Governor Abiola Ajimobi. As we speak, road infrastructure projects started by Oyo state government several years ago have been abandoned, public primary and secondary schools are starved of resources and left in derelict states, workers are being owed salaries of more than six months in various cases, and citizens are living in daily fear of their lives and properties.

Only a few days ago, students at the state-owned Emmanuel Alayande College of Education, frustrated by lack of government attention and incessant closure of the institution, went on a demonstration that turned violent, leading to the disproportionate and irresponsible use of live ammunition by the security forces.

The good people of Oyo will not continue to take the pains of bad governance lying down. The era of “suffering and smiling” has ended; the age of “arise and fight for your rights” has come. Given the extent to which Oyo State is blessed with abundant natural and human resources, the level of poverty and squalor in Oyo federal constituency, in particular, is unwarranted and inexcusable. This is by no means a call to violence, but a call to vigilance, a call to citizens to awake and fight for transparency, accountability and good governance.

In closing, OGF wishes to emphasize that the said advertorial does not represent the popular opinion of the people of Oyo

Oyo Global Forum will redouble its efforts to work with, and for, the long suffering masses of the people of Oyo Federal Constituency. Hand in hand, a new Oyo is possible!