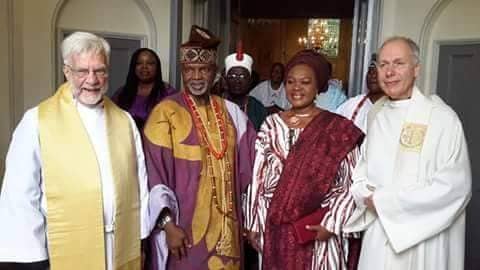 The celebrated Oloye Agba Akin did not pop champagne; neither did he allow self-seeking acolytes clink glasses in his honor. Rather, the handsome and fine writer only marked the day and took his wife for a launch in a cozy high profile location in the heart of London with a few friends and family.

The private celebration enabled the happy-go-lucky couple to reminisce about their love life. Beautiful wife of 40 years was said to be excited about the success of her marriage.

The veteran journalist in his special anniversary message wrote:

Yesterday, Sunday, 12th August 2018, was the 1st Day of Dhul Hijja 1439 AH, the first day of this week and our glorious  40th wedding anniversary. And as the thankful saying goes, the mouths of my humble self, those of my dear wife, families, friends and well-wishers cannot adequately chant our sincere praises to God and all of you, His good people, for the manifestations of mercies and love that endure in our home and lives.

How more unique, blessed and lucky can a couple be, if the following facts, as they affect, Adetokunbo and I, are taken into account.

(5)GOD’S WONDERFUL EXTRAs – Our dear families, children, in-laws, grandchildren, old and new friends, well-wishers plus the Royal Houses of the Olubadan of Ibadanland and the Arole Oduduwa and the Ooni of Ife.

Again, how more blessed, loved and lucky can a couple be? We thank God for His mercies that endure in our lives and homes, and the genuine love and good wishes of you, His good people.

May we continue to receive God’s benevolence. Amen.