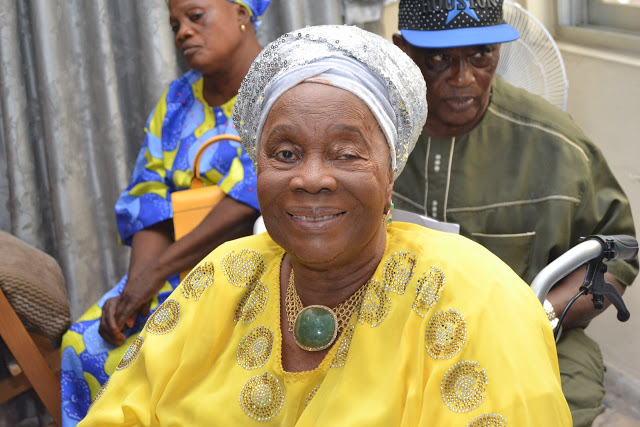 It was gathering of ‘Who is Who’ in Lagos, Saturday, December 22, 2019 as friend and family gathered to celebrate the centenary year of the popular Alabukun brand.

Leading the pack were the children of the producer of the Alabukun brand, Chief Jacob Sogboyega Odulate, who died on April 18, 1962.

The event was held at the residence of the eldest surviving daughter of Chief Jacob Odulate , Mrs  Stella Olubukunola Odesanya in Lagos.

Speaking at the event, the daughter of Chief Odulate, Chief Folake Solanke (SAN) said her father’ s superior  brilliance coupled  with courageous and adventurous spirit  led him to the establishment of Alabukun Patent Medicine Supply Stores at Sapon, Abeokuta, after he had  worked and acquired basic knowledge in pharmaceutical products and how to take care of patients from Baba Sapara, an Egba pharmacist.

Solanke said of her father: “God prospered him and he became affluent. He later through natural creativity and brain power invented many efficacious medications which he manufactured in his home factory with the help of his wives and children.

“He used local materials as well as imported proprietary drugs purchased from the English firm of Aryton and Saunders & co of Liverpool, England.

” In an essay titled: ‘Wake up Africans’ which he wrote in 1937 , he declared that” there is no single herb, root or bark that has not got some hidden treasures in it for human use.

” Alabukun Mentholine Balm was the flagship of Alabukun brand followed by Alabukun powder , the only survivor of his medication,” Solanke said.

Solanke said she also remembered her father’s medication which include ‘ Akokoro’, medicine for toothache, ‘ Ose Abiwere: – for pregnant women to deliver safely and Elixir for men  power which she said is a precursor for Viagra.

She said that her father was so sure of the efficacy of his medicine that he put his photograph on the packets.

She said the Alabukun factory in Isolo Lagos is currently being managed by one of the grandsons, Koye, who is Segun Odulate’s son. The Late Segun was Baba’s fourth son.