Alaperu Of Iperu Talks About His 20th Coronation 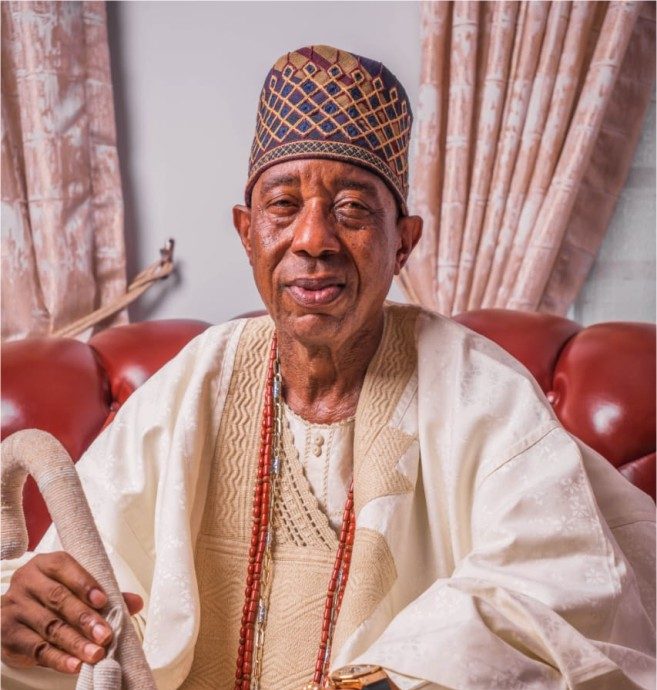 Only recently, a new and befitting palace was commissioned beside the old palace. It was commissioned on 17th February 2022 by Sir Dr Kessington Adebukunola Adebutu, the Balogun & Baba Oba of Iperu Remo and the Odole Oodua of the Source. The new Alaperu palace was donated by the Kessington Adebukunola Adebutu Foundation (KAAF). The old palace was declared open on Sunday 30th March 2002 by Alaiyeluwa, Oba Okunade Sijuade Olubuse II, the late Ooni of Ife.

A few days back, City People met with the Alaperu to ask him how he feels about his 20th Coronation Anniversary. We wanted to know what was on his mind. He smiled when we asked. His face brightened. “Well, I just give glory to God,” he said. “We have come a long way. And we thank God that we can have one or 2 achievements that we can point to, and say in these 20 years, these are the things we have been able to achieve, these are the things we can point to.

When I look back, I feel happy. In the last 20 years, we have had 2 House of Reps. We have also produced the current Governor, Prince Dapo Abiodun. He is from Iperu. So, we have a lot to thank God for”.

In terms of infrastructural developments, he is also happy that Iperu Akesan has witnessed Growth. “A lot has changed. When we came in, there was only one Micro-Finance Bank. It was a local Micro Finance Bank for the community. What we did was to bring back our own legacy, because Agbonmagbe Bank started from Iperu Remo. We thank God we were able to bring the bank back.  Today, Wema Bank is the only bank that we have serving Iperu and the upper Remo. And that goes a long way.

Talking about the Methodist Church we have Remo Central of the Cathedral that is sitting in Iperu, here. And we have the Institute too. We have Babcock University Campus have also. When Babcock first came to Iperu many years ago they drove them away. They said No ooo, we don’t want them ooo. At that time, our people were more of Isese people. So, we now went back to them. We thank God today they now have a Campus in Iperu that produces lawyers, quality lawyers. One of our sons who graduated from there now works with the Vice-President. He was my Chief Security Officer during my 10th year Anniversary and he did the job perfectly. And today you can see the high-quality products being produced from the Babcock University Campus here. There are many, many things like that and we look back and say God we thank you.

Have you seen the ongoing road reconstruction? Have you seen our road now? Very many years ago, it was the only road between the North and the South. Now we are having the expansion of the road. When we came in 20 years ago, they were selling land in Iperu for N8,000 but now they are selling land for N20 million, N100 million. The land has appreciated. You now hear them calling big sums of money. It can only be God. Now, we have this automobile industry. We now assembly vehicles in Iperu. Now, we are about to have Cargo Airport. By God’s grace, the Governor says it will be operational in November. So, by the time it takes off, you can export your products from Iperu”

Kabiyeesi is also quite happy with the new Palace donated by the Kessington Adebukunola Adebutu Foundation (KAAF) “It’s the Grace of God, we thank God for the contributions of the Odole Oodua. He is our father. He is the Baba Oba. Baba wants the best for his son. That is why he gave us this befitting Palace as a birthday present”.

How does Kabiyeesi plan to celebrate his 20th Coronation? “Initially, the way I planned it, I wanted something quiet. But people are now saying let’s celebrate it big. We now want to give out some Chieftaincies and honour.

We are starting with the Remo CAN. We would have Prayers on the 23rd we would do the Muslim aspect of it. A lot of our friends are coming around to celebrate with us. We would have the grand finale on the 30th, by God’s Grace with the social aspect with King Sunny Ade on Bandstand, with a King singing for a King”.

At the time Kabiyeesi Alaperu came in asking what was the feeling like? “It was like the movie coming to America. But today we have been able to learn on the job because there is no school for Obaship. You have to learn on the job. You have to do a lot of things. And with God on your side, you will make it. I was able to learn. I was able to cope. What helped me is my training I am used to meeting people, I am used to attending to people. That was very, very helpful. That prepared for the throne.

Alaperu Of Iperu Talks About His 20th Coronation was last modified: March 15th, 2022 by City People