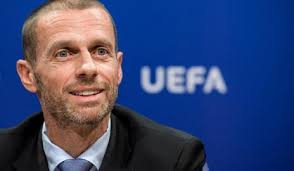 Aleksander Ceferin has been re-elected unopposed as UEFA president for a four-year term at the governing body’s annual congress in Rome.

Ceferin, who began his term as president in 2016 as permanent successor to Michel Platini, was voted in by acclamation from the delegates of the 55 member associations of UEFA. The Slovenian vowed to work alongside European Club Association leader Andrea Agnelli in order to protect the Champions League from a breakaway ‘Super League’ of elite clubs.

“It’s not a promise, it’s a fact. Major clubs, if you had carried out your alleged plan, your clubs would have lost their status as ‘great clubs’ in the hearts of the people. The only thing ‘great’ about you would have been your past, and nothing else.

By respecting the football pyramid, the promotion and relegation system that lies at the heart of our sporting culture, results on the pitch, which sometimes differ from those in the account books, you remain great clubs in the world’s eyes” said Ceferin.