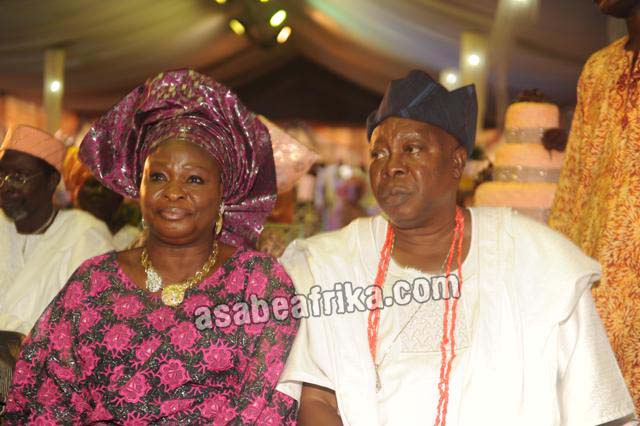 •Becomes Yeye Oba Of IBORO Kingdom In YEWA
•As BUARI OLOTO Prepares To Become An OBA
Penultimate Saturday 27th of May 2017, a train of Lagos society women stormed Iboro in Yewa for a popular Lagos society woman and the CEO, Alshadai Fabric, Alhaja Shadiat Oloto, as she became the Yeye Oba of Iboroland, Yewa. The event which was a royal, blue-and-white affairs shook the whole of Yewa to its foundation as the town welcomed a king after 2 decades. City People’s Assistant Society Editor, ABIOLA ORISILE, serves you gist-from the event.
WHY IYA OYO WAS PICKED TO BE THE YEYE OBA OF IBOROLAND
It is no longer news that Alhaji Alimotu Shadiat a.k.a Iya Oyo is the new Yeye Oba of Iboro- land in Yewa, Ogun State, but many observers were surprised that the Lagos society woman added a new feather to her cap. In case you don’t know why Iya Oyo was picked as Yeye Oba of Iboro land, permit us to tell you that investigations revealed that Kabiyesi Oba Salako doesn’t only respect and adore Iya Oyo, he holds her in esteem. That was why he didn’t give it a second thought after becoming the King to make her the Yeye Oba. The king who revealed his relationship with Iya Oyo during his speech said: ‘I have known Iya Oyo for more than 20years and she has been playing the role of a mother to me and my family ever since. Iya Oyo, you are my mother and my elder sister, please you have to come to Iboro more often now that you are the Yeye Oba of Iboroland“. Iya Oyo was the cynosure of all eyes in a white special aso-oke from Bisbod while her white special bead had 18 carat gold stopper in between. She travelled to Italy to get the precious luxury jewellery which she used. Her unique flat slippers matched with her beaded pearl white purse.

HER HUSBAND, AN EARLY CALLER
Alhaji Buari Oloto, the CEO of Abu Oloto Investment, was one of the early callers at his beautiful wife’s installation as Yeye Oba. Despite coming in from Lagos, he was one of those who made the 10am stipulated time for the event. He played a pivotal role at the event despite spending big to make sure the event went as planned . As expected, he came with many guests, to share in the joy of the woman who owns his heart. The new Oba Elect of Igunru in Surulere, beamed with smiles as his pretty wife stepped out looking pretty in a special white aso-oke which looked so good on her . Iya oyo, a woman of panache and finesse, walked gracefully as she gave her husband a big hug.

AND IBORO GETS KING, OBA ABAYOMI SALAKO, AFTER 15YEARS
Iboro is a popular town in Yewa. Its popularity is not unconnected with a saying:, “Iboro leti Shala“(Iboro near Shala) and the axiom has made the town more popular. The town, which is a few kilometres from ‘Imashayi‘ and ‘Ibeche‘ didn’t have a king for years. The town was thrown into jubilation last week as people came from far and near to witness the historic installation. Kabiyesi, Abayomi Salako is ‘Ilufemiloye‘(popular choice), the American-based businessman was all smiles as he ascended the throne of his forefathers. In his speech, he urged his people to be hard working and prayed his time would bring forth lots of development in Iboroland.

OGUN DEPUTY GOVERNOR, SSG AND CHIEF OF STAFF WERE PRESENT
The Deputy Governor of Ogun state, Mrs Yetunde Onanuga was at the event. She was there in her capacity to represent the Executive Governor of Ogun state, Senator Ibikunle Amosun. So also was Ogun SSG Barrister Taiwo Adeoluwa and Chief of Staff of Ogun state, Tolu Odebiyi, who also an indigene of Iboro. He was one of the early callers and he didn‘t leave until many hours later.

MEET KABIYESI’S 2 PRETTY OLOORIS
Kabiyesi Abayomi Salako has two pretty Olooris. They had no hidding place at his coronation. They were clad in the same special multi-colour aso-oke with Kabiyesi. They are based in United States with their husband and they came in with all their successful children to witness the d-day. Oloori Kudirat Salako and Kabiyesi’s younger Olori looked out for each other most of the time at the installation. They love and care about their husband so much. Oloori Kudirat works in the Medical establishment, while the younger Oloori runs her private business.

AN ARRAY OF LAGOS CLOTH MERCHANTS
To say that Alhja Shadiat Abu-Oloto is well loved among many cloth merchants would be an understatement as many Lagos Island cloth merchants locked up their shops to be at Yewa for her. One of the many cloth merchants at the event was Alhaja Risi Odumosu, the Iyaloja Gutter market. She came alone as her best friend, Rose Oshipitan, the CEO of Fiurstroyal, was out of town. Others were Alhaja Kuburat Sokunbi and her husband, Akeem. Sherifat Olugbode, Ahaja Alebiosu, Alhaja Sidikat Socopao, Alhaja Kudirat Alegbe, Ayimba Yemisi Fasawe and many others

82YEAR OLD CASH MADAM STORMS-IBORO FOR IYA OYO
Chief Bisi Edionseri came from Abeokuta for Alhaja Shadiat Abu Oloto. She is one of those who love Iya Oyo to the bone and their relationship dates back to 30years ago. She is also very close to Alhaji Buari Oloto. Did we remember to tell you that Bisi Edionseri aka Cash Madam is the Iyalaje of YEWA Land? So, she is very popular in Yewaland. She spent many hours before she left. She looked sweet in a simple iro and buba, while her unique 18carat gold set kept glittering while the event lasted.

SADE ADESOYE AND HER HUSBAND FLEW IN FROM ABUJA
Otunba Sade Adesoye and her handsome husband, Balogun Adesoye couldn’t afford to miss out at Iya Oyo installation as Yeye Oba and this was why they flew in from Abuja to witness the event. She was the cynosure of all eyes in a special HOH lace matched with a white headgear. As usual, she walked like the Queen of Adesoye that she is.
WITH LOVE FROM THE OLOTOS AND IYA OYO’S FAMILY
Virtually all the members of Abu Oloto‘s extended family stormed Iboro for Iya Oyo. They love their wife to the bone and love to show support to her when the need arises. All her children and their friends came too. Iya Oyo’s elder and younger siblings too made sure they were at the event. Among many sighted were Barrister Dolapo Oloto-Alabi and her husband, Jubril Ayinde Oloto, Sulaiman and Idris. Among the younger ones are Alhaja Oloto, Alhaji Moshood Olaniyan, Alhaji Wasiu and many others.

K1 SERENADES GUESTS
King of fuji music, King Wasiu Ayinde Marshal, was on the bandstand, dishing out good music to guests. He came in early and started dishing out good music, which kept many of the guests dancing for hours. Abiola Atanda who was the event compere was at her best, calling out guest names as they arrived.