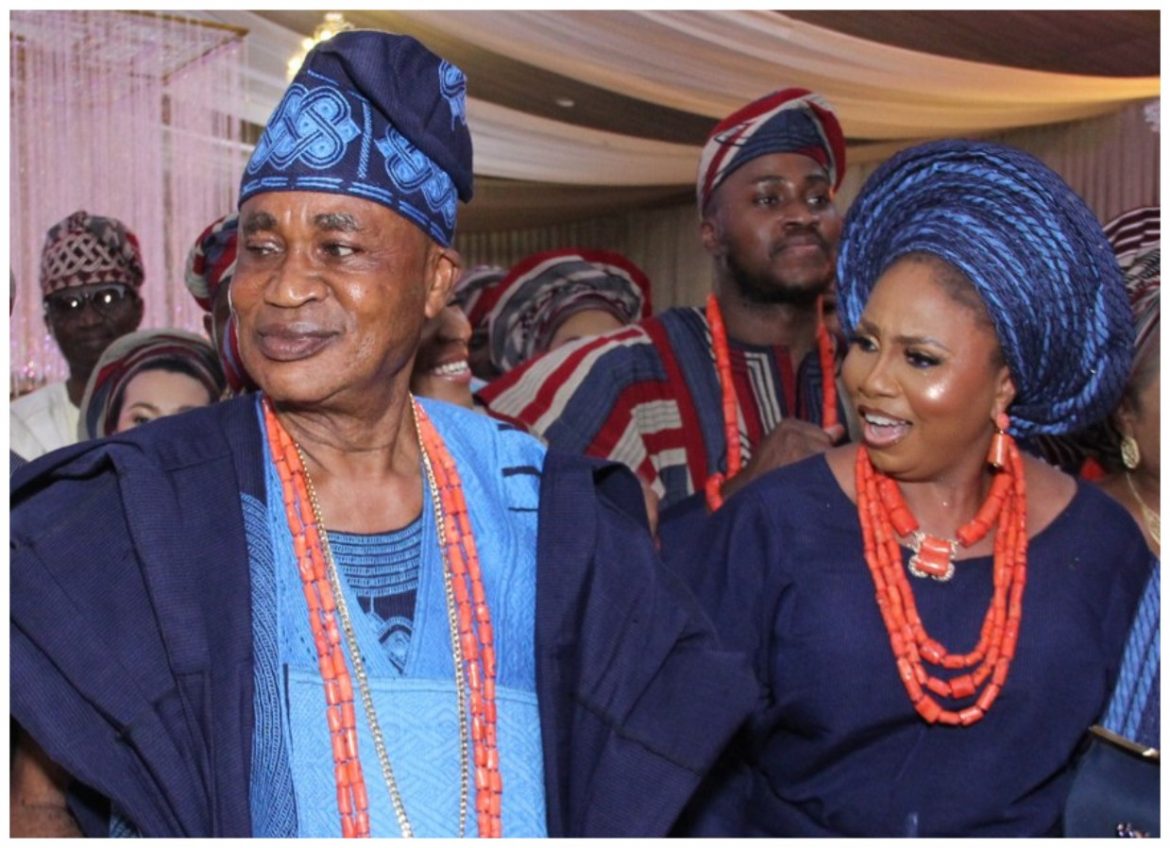 “To be seventy years young is sometimes far more cheerful and hopeful than to be 40 years old.” This was the exact expression of a man who had seen it all. Mr Johnson Adenaike had experienced the Good, Bad and Ugly side of life. He had come through a lot of difficulties to emerge champion over life and all its hurdles as he turned 70 in style.

On Saturday, February 26, 2022, the wife, children, family, loved ones, business associates and church members of Mr Adenaike gathered to celebrate the faithfulness of God in the life of the new septuagenarian and it was done in a big way.

Activities started with a special thanksgiving and Holy Communion service that held at the St. Jude’s Anglican Church, Magodo G.R.A., Lagos. Other activities followed after then. It was a big party with a touch of class. There was more than enough to eat drink and the organization was top-notch.

City People’s Brands Editor, DAMILARE SALAMI (08155134152) was at the event alongside Senior Photojournalist, Abdulrasheed Sanni and in this report, he brings you a full gist of all that went down there, enjoy.

Mr Johnson Adesanya Adenaike FCCA, FCA is a successful chartered accountant, a businessman with more than two high-flying outfits in Nigeria. He is an employer of labour who also doubles as the breadwinner of many families. He is a philanthropist and a lover of God and his works. He was born to the family of Marcus Adesanya Adenaike of Odolameso quarters- Ijebu Imusin and Princess Aiyedunro Adenaike- Nee Adekoya of ldokunusi quarters- Ijebu Mushin, on 23rd February 1952. He grew up in a hamlet called, Egan Eribabalo. He started his primary school education at the age of 6, at Saint John’s Primary School, Idode. He was very brilliant and always came first during his 2 years stay in the school. Mr Johnson Adesanya left Saint John’s Primary School, Idode in 1960 to Saint Mary’s Primary School, ljebu mushin. It is pertinent to mention that he started to live alone at the age of 9, taking decisions in all aspects of life.

In January 1968, he was offered admission into Ijebu Ode Grammar School; he was awarded a western state government scholarship in 1970. The most important feature of the scholarship was that there was no application or interview. It was purely based on merit, for the best overall student in form 2 going to form 3. During the short period that he needed a job before proceeding to higher institution, he joined the Federal Inland Revenue Service, at Mosaic House, Tinubu square. He was advised not to go to university; rather he should go to a polytechnic for early completion of the professional accounting examination. Johnson Adesanya Adenaike later joined Federal Audit Department, before proceeding to Yaba College of Technology for a Higher National Diploma Certificate in 1976. He joined Polygram records limited (formally Phonogram) as an accountant and was immediately sent to their Africa regional office in Nairobi, Kenya, for a year of training. On his return from Kenya, he was promoted to the post of assistant chief accountant and chief accountant in 1983. He later became chief accountant/company secretary and eventually, General Manager. He resigned in December 1992 to pursue other interests. Just before he resigned, he registered two companies, namely, Yomdass Ventures Limited and Yomdass Investments Limited. With these businesses he excelled in spite of all the challenges, he faced initially. Johnson Adenaike Adesanya Adenaike is happily married to his beautiful wife Mrs Tolulope Adenaike and the union is blessed with 4 highly resourceful children, practicing their various professions, in the United States.

The day began for JJ @ 70, his beautiful wife, children and their spouses as they landed the church auditorium in style. The couple was dressed in traditional aso-ofi. It was a combination of royal blue and magenta. JJ is a very handsome and fair-complexioned man. He looks good in whatever he wears but this time around, he was simply gorgeous. His wife, Mrs Tolulope Adenaike was the brain behind the gorgeous looks.

Not many people have the privilege of having royal fathers attending their birthdays but JJ does. He has had a very strong influence in his hometown, Ijebu-Mushin and Ogun State in general. It was not a surprise for many when two royal fathers stormed the church thanksgiving service in honour of one of their illustrious sons.

Just as the reception was about to begin, two other royal fathers joined the party. Their presence added more glam and class to the owambe. Some of the royal fathers spotted at the event are HRM Oba Adedokun Oduneise Odusanya, the Olu of Odosenlu, Ogun State. He came in the company of his beautiful wife, Olori Olori Bukola Odusanya. Oba Emmanuel Olusaanu, the Alaro Ajalaye of Ilugu South, Ogun State. He also had the company of his wife, Olori Oluwatoyin Olusanu Ajalaye at the event.

Other royal fathers present are HRM Olusegun Ogunye, the Ojotumoro of Abigi and HRM Oba Taiwo Taiwo, the Amororo II and Onipara of Ipaara-Remo, Ogun State and HRM Oba Sode Abdulsalam, the Sadelure of Isonyinland.

At about 1:00 pm, guests had started arriving at the venue of the reception party. The Classique Event Center is easy to locate because it is situated in the heart of Kudirat Abiola Way in Alausa, Ikeja and has enough parking space. The brand and quality of cars that were parked already told people the calibre of the guests that were present at the party. It was an array of G-Wagons, Range Rover Sports, Venza and highly expensive executive and luxurious cars. The least of the cars parked in the lot would be worth about N10 million.

The auditorium was completely transformed into a party hub. The event décor did a massive job. The banner and image of JJ@70 was everywhere from the red carpet that was placed just at the entrance of the auditorium. As guests were arriving, the red carpet was their first point of call paparazzi.

GLEETTERZ EVENTS DID A MASSIVE JOB

Mrs Fehintola Shittu Onabule the CEO of Gleetterz Events, the planner of JJ@70 did a massive job. Everything was well organized and Gleetterz Events should have gotten a plaque of honour for being so professional. Starting with the arrival, there’s a tag on the invite that specifically tells the ushers where the guests should be seated. Every seat already had a name tag which was a way of controlling the crowd and over flooding at the party. At the entrance were takeaway bags that contained the souvenirs distributed by the celebrant. There were ushers assigned to cater to the needs of guests at each table while the package that contained each guest’s name already has the cutlery, cake and menu. All the guests needed to do was call the usher and tick what they wanted and it was served immediately. It was such a seamless event with all the enjoyment properly served on each table without necessarily wandering about in the auditorium.

Sounds funny right? But not really; the guests name list at the event was so sensible. At JJ @70’s party, there was a huge banner that contained all the names of the expected guests. Whether young or old, rich or poor, all the guests were on the list with a proper code to trace whoever it is that comes with such codes on their invites. This is one of the innovations Gleetterz Events brought to event planning at the party.

The blasts of cool music from the oldies welcomed guests into the auditorium as the event was gathering momentum. DJ Kulet was the secret behind the spice. She was on the turntable, serving appropriate music for the guests. Although there were two separate generations at the event, this beautiful Disc Jockey found a way of balancing that generational gap by entertaining them with the kind of songs that suited both generations. She blasted oldies from artistes in the 80s as well as the millennials too.

Niyi Ojemakinde is a popular voice on the radio. He is a broadcaster and a compere. He was in charge of the event from the blast of the whistle to the very end. He is an MC with a touch of class. His jokes were rib-cracking and very moderate. He was able to balance all the activities and was time conscious too.

If there was anyone who deserved an accolade for the general success of the party, it is the wife of the celebrant, Mrs Tolulope Adenaike. She is such a beautiful woman with a touch of class and success in everything she does. City People further gathered that she has been a source of joy and encouragement to JJ and ever since she came into Mr Adenaike’s life, it has been from one level of success to another.

KSA WAS THERE LIVE

Big parties are meant for big-time performers and entertainers and that was why one of Naija’s biggest musicians and entertainers, King Sunny Ade and his crew came in a big way to entertain the guests. Yes, KSA was on the bandstand and the ever-young musician wowed everyone in his usual manner. As a poet, singer, dancer and general entertainer, KSA thrilled for about 9 hours non-stop. The biggest names at the event stormed the stage to spray KSA.

Faridat Okikiola Olanrewaju popularly known as Ola Oriki is an oral poet, oriki orile chanter, Alaga Iduro, Alaga Ijoko, and general entertainer. She is good at what she does and is regarded as one of the best in the panegyrics singing business. She was contacted by Mrs Tolulope Adenaike to add spices to the already colourful event and she did that in style.

Rt Revd. Morakinyo Okeremi is a retired Anglican Communion Bishop who got to the peak of his clergy career before retiring. However, he is very active and relevant. He is a mentor and father figure for the celebrant and this was what earned him the prestigious role of the chairman of the day. During his speech, he appreciated Mrs Tolulope Adenaike for staying by her husband through thick and thin and bringing a touch of excellence into his life. He obviously knows a lot about the celebrant and his family and he expressed a few things about them. He ended his speech with some heartfelt prayers. Being a retired clergy, that was expected; his overall delivery was top-notch.

Chief (Mrs.) Aderonke Mohammed her husband Alhaji AbdulAkeem are the Aare Bobagunwa & Yeye Aje/Yeye BOBAGUNWA of Oyan Kingdom in Osun State. They were one of the biggest guests at the event. City People found out that Yeye Aderonke Mohammed and Mrs Tolulope Adenaike are very close friends. They were spotted dancing and spraying at the party. At some point in the party, Yeye Aderonke and her husband were left alone with KSA who was singing their praises and getting cash rewards in return.